Thousands of police officers who’ve arrived from around the country are getting their assignments from D.C. police. Dump trucks and buses are being readied as makeshift barriers. Roads around the Capitol are slowly being closed off.

Law enforcement officials in the nation’s capital are finishing final preparations for an estimated 1 million people expected in Washington, D.C. this weekend for the presidential inauguration of Donald Trump and a series of planned anti-Trump marches and protests around the nation’s capital.

Officials are expecting 700,000 to 900,000 people at Trump’s inauguration on Friday, along with 99 groups on Friday and Saturday that plan to either protest or gather in support of the incoming president, Homeland Security Secretary Jeh Johnson said earlier this week. The sheer number of gatherings presents a unique challenge for law enforcement officials tasked with keeping this year’s inaugural events safe, especially in light of terrorist attacks in Europe over the past year involving trucks used as weapons.

Read more: Here is a Complete Schedule of All the Donald Trump Inauguration Events

Roughly 28,000 law enforcement officers will be on hand for the inauguration and the Women’s March on Washington planned for Saturday. The event’s organizers have said publicly they expect 200,000 marchers, but a Washington, D.C., homeland security official told the New York Times that authorities are planning for 400,000 to 500,000.

For some departments, planning has been underway for months. Peter Newsham, the interim chief of Washington, D.C.’s Metropolitan Police Department, says his agency began preparing more than a year ago and started coordinating several months ago with federal departments that have their own jurisdictions throughout the city on Inauguration Day.

Security officials have begun preparing large trucks and buses to form a security barrier around the inaugural events. They’re a possible preventive measure against an attack by someone driving a vehicle, similar to one last year in Berlin. Nearby hospitals, meanwhile, have been notified in the event of possible injuries related to the inauguration, according to the Times.

On Thursday, 3,000 police officers from around the country met in D.C. to discuss logistics for keeping this year’s route secure. Those officers—who will be wearing their own local uniforms—will be under the command of D.C. police, while personnel from a number of other agencies—including the National Guard, the Department of Homeland Security, the United States Coast Guard and the Transportation Security Administration—will make up the rest of the 28,000 officials on hand.

The overall security plan for President Obama and President-elect Trump is controlled by the U.S. Secret Service, while the Capitol’s grounds where the inauguration and swearing-in ceremonies are held are policed by U.S. Capitol Police. The sidewalks and parks surrounding the parade route along Pennsylvania Avenue will be patrolled by U.S. Park Police, while the street itself will be under the jurisdiction of the D.C. police. Security costs are estimated to reach $100 million.

Officials expect about half as many people this year compared to President Obama’s inauguration in 2009, which drew an estimated 1.8 million. The main challenge this year will be securing the nation’s capital for two straight days as hundreds of thousands of protesters descend on Washington to protest the new president in what could be the largest inaugural protests since the 1970s and the Vietnam War era.

“The challenge about having a large-scale demonstration back-to-back with the inauguration is that officers will have longer working days,” Newsham says. “But police officers are used to that kind of thing.”

At this week’s news conference, Homeland Security Secretary Johnson said that officials “know of no specific credible threat directed toward the inauguration” but added that officials have “got to be vigilant,” citing potential “individual acts of violent extremism.”

Newsham said he also knows of no credible threats to the events, adding that organizers of Saturday’s women’s march “have affirmatively said they want it to be a large peaceful event. We’re hopeful that will be the case.” 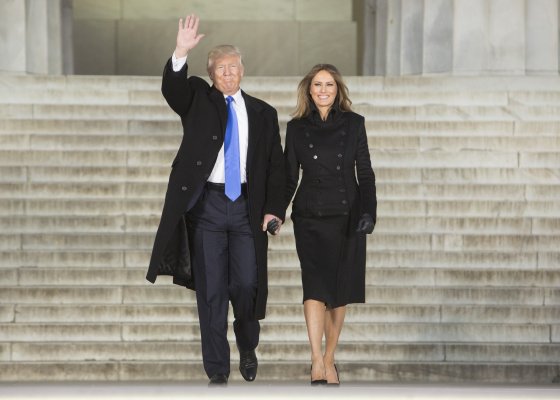 Here Is a Complete Schedule of All the Donald Trump Inauguration Events
Next Up: Editor's Pick