Since the election, Donald Trump has been sending mixed signals on his pledge to crack down on influence peddling in Washington. On one hand, he’s floated a five-year ban on executive and congressional branch employees becoming lobbyists and a lifetime ban on certain Defense Department officials going to work for Pentagon contractors. Speaker Paul Ryan has described this ban as “dangerous,” but we think it’s a pretty good idea.

On the other hand, it looks like Trump is ripping up one of the most effective ways to prevent cronyism in the Beltway. It’s called Executive Order 13490, titled, “Ethics Commitments By Executive Branch Personnel,” signed by President Obama in 2009.

Of the ten ethics agreements for Trump nominees published by the independent Office of Government Ethics (OGE), not one of them references EO 13490, which requires, among other things, “all appointees entering government” to agree that they will not, for a period of two years from the date of their appointment, “participate in any particular matter involving specific parties that is directly and substantially related to [their] former employer or former clients, including regulations and contracts.”

During the Obama administration, that two-year cooling-off period, as well as other provisions in the order, helped to ensure that the administration was free and clear of conflicts of interest, especially those involving cozy dealings between senior government officials and their former employers or clients.

But OGE’s latest ethics agreements for incoming Cabinet secretaries and senior officials are devoid of any reference to this rule or any mention of restrictions lasting longer than a year. Why? Clearly someone decided the ethics rule won’t be around much longer.

This move is especially alarming coming on the heels of the unsuccessful attempt to gut the Office of Congressional Ethics by House Judiciary Chair Rep. Bob Goodlatte, questions by House Government Reform Chair Jason Chaffetz about OGE Director Walt Shaub’s public interactions, and the not-so-subtle threat from incoming White House Chief of Staff Reince Priebus, who warned Shaub to “be careful.” When you also consider Trump’s plan to retain an ownership interest in his businesses, it appears that ethics standards will be one of the first casualties of the new year.

Certainly, Ethics Order 13490 wasn’t perfect. That’s why the Project On Government Oversight (POGO) and other good-government groups made efforts in 2009 to strengthen it. During last year’s presidential campaign, we approached both the Trump and Clinton transition teams before the election in order to fight for its inclusion and strengthening in the next administration. In the first few days after the election, we heard from Trump’s team, but since then our calls (and our letters) have gone unanswered. We think now we know why.

If the President is at all serious about draining the swamp, he should build on President Obama’s groundbreaking ethics order by going even further in curbing undue influence. That means going beyond the current limitations on registered lobbyists to cover anyone with a financial conflict of interest, closing loopholes and adopting a single standard that will apply to all those who might manipulate public policy for personal and private gain.

If, however, Trump has decided to repeal the order without an effective replacement, it would only make the swamp here in Washington that much darker and deeper. 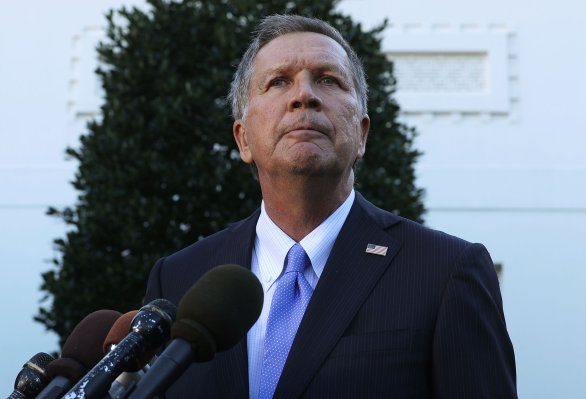 John Kasich: The GOP Must Properly Fix Obamacare
Next Up: Editor's Pick