President Obama ended his final press conference as he started his campaign for the White House nearly 10 years ago: optimistic and full of hope.

Two days before he hands the White House over to a predecessor who has criticized much of his actions and agenda, the President said that he thinks things are going to turn out all right.

“I believe in this country. I believe in the American people. I believe that people are more good than bad,” Obama said. “This is not just a matter of ‘no-drama Obama,’ but this is truly what I believe. At my core, I think we’re going to be O.K. We just have to work for it.”

Obama’s remarks to the White House press corps, like many of his comments in recent days, seemed to address the state of the country under President-elect Donald Trump both directly and indirectly.

He warned his successor that he should think through the consequences of policies that he enacts, noted that there were “still going to be some battles that need to take place” on gay rights and said that there is a “stew bubbling up” in the country on race relations.

He also subtly underscored his differences with Trump, who refused to answer a question from a CNN reporter at a recent press conference, by complimenting the press, arguing that it plays a vital role in safeguarding democracy. He also pointedly called on a diverse array of reporters from Fox News, Univision, al-Arabiya and an LGBT newspaper.

When Obama and his family head off to Palm Springs, Calif., on Friday, it’ll be the start of a long-awaited vacation that he said would include quality time with his wife and two daughters and some writing.

“It’s important for me to take some time to process this amazing experience that we’ve gone through,” Obama said. “I want to be quiet a little bit.”

Still, he reiterated that there are issues that would spur him to jump back into the political arena as a private citizen. Among the subjects that he expressed continued concern about were systemic discrimination, voting rights and the deportation of undocumented immigrants brought to the U.S. as children.

Obama also took a moment to reflect on his status as the first African-American President, saying that he hoped in the future there would be a Jewish President, a Hindu president and even some “mixed-up” Presidents from multiracial backgrounds.

“I think we’re going to see people of merit of every race, faith, corner of this country rise up,” he said. “That’s the strength of America.” 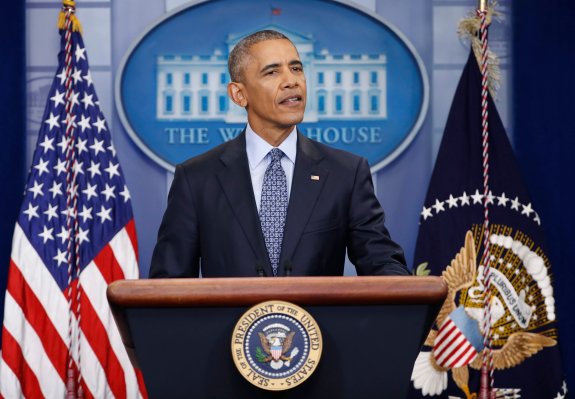