These 7 Countries Are Dreading Donald Trump's Presidency the Most

There are those outside the U.S. who will welcome Donald Trump’s arrival as the 45th President of the United States. Russia will cheer his skepticism of NATO’s value, and his suggestion of a thaw in relations. The Philippines’ Rodrigo Duterte, Turkey’s Recep Tayyip Erdogan, and Syria’s Bashar al-Assad will applaud the President’s stress on common interests rather than Western values. Others, however, will watch the inauguration with dread. Here are some who will be particularly on edge with Trump in the White House.

Mexico
The President has warned many times that Mexico can expect a wall, a bill for the wall, a few million deportations, and intense pressure on trade. He has little good to say about China either, but Mexico, which sends 80% of its exports to the U.S. and draws 60% of its imports from the U.S., is much less able to withstand the pressure. Even if Trump does less arm-twisting than expected, his threats and hostile rhetoric will boost the candidacy of leftist candidate Andres Manuel Lopez Obrador in next year’s presidential election. It’s hard to know which of these men might do more long-term damage to Mexico’s economy.

Japan
Yes, Trump and Prime Minister Shinzo Abe have common interests. Both want Japan to strengthen its military muscle to accept greater responsibility for its own security. Like Trump, Abe wants better relations with Putin’s Russia, a crucial source of energy for Japan. Abe also still hopes he can strike a deal with Moscow to regain control of islands lost to the Soviets after World War II. But if Trump creates increasingly contentious relations with China, Japan will find itself caught between two of its biggest commercial partners. Add Japan’s often difficult relations with South Korea, and the country could be in bleak isolation.

Latvia, Estonia and Lithuania
The Baltic states will have watched Trump’s inauguration with a special kind of anxiety. Russia’s Vladimir Putin justified his right to intervene in Ukraine by claiming a duty to protect ethnic Russians who live within its borders. Latvia and Estonia each have higher percentages of Russians within their populations than Ukraine. Of course, unlike Ukraine, the Baltics are NATO members — but Trump’s bid to reset relations with the Kremlin and his charge that NATO is “obsolete” send signals that Latvia and Estonia cannot ignore. In a move Trump might appreciate, Latvia and Estonia plan to wall up along their respective borders with Russia. Neighboring Lithuania will seal its border with the Russian province of Kaliningrad. A little barbed wire won’t stop an invasion, but it will make it a little harder for small groups of Russian soldiers to misbehave.

Germany
Chancellor Angela Merkel marked Trump’s election with a qualified offer of cooperation based upon common values of “democracy, freedom, as well as respect for the rule of law and the dignity of each and every person, regardless of their origin, skin color, creed, gender, sexual orientation, or political views.” In other words, we look forward to working with you unless you keep campaign promises to treat Mexicans and Muslims with contempt. In addition, it is Merkel who has led European condemnation of Putin’s intervention in Ukraine and the effort to impose and extend sanctions on Russia. Trump’s embrace of Russia’s strongman will undermine Merkel and empower those in Europe who warn that attempts to punish Russia are self-defeating.

France
In France, the anxiety hits closer to home. Trump’s victory may embolden voters to choose the far-right National Front in elections this spring. The party’s leader Marine Le Pen has promised that, if elected president, she will launch a bid to lead France out of the E.U. Though success depends more on developments inside the country’s borders, Le Pen’s opponents fear that Trump will publicly back her candidacy, providing crucial momentum. They’re also worried that Trump would turn a blind eye if Russia works to boost her candidacy via cyber-mischief.

It has been many years since the arrival of a new U.S. president has aroused such strong feelings both at home and abroad. Will Trump keep the promises that have struck fear into leaders and governments around the world? Only time will tell. 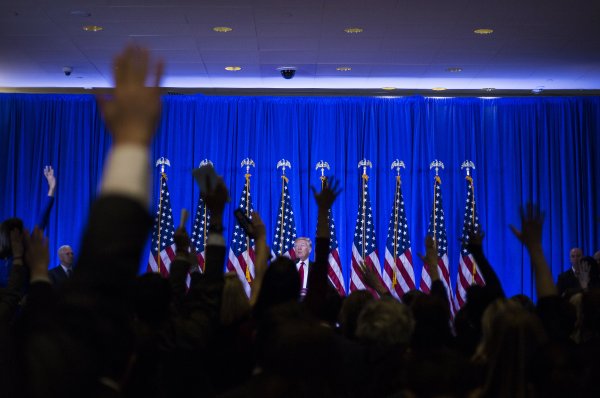 Donald Trump Said in 2015 He Wouldn't Keep Reporters Out of the White House
Next Up: Editor's Pick