President Elect Donald Trump’s nominee to head the Environmental Protection Agency (EPA) offered a greatly scaled-back vision for the agency during a confirmation hearing Wednesday while rejecting the President-elect’s claim that global warming is a hoax.

Oklahoma Attorney General Scott Pruitt called for an expanded role for states in environmental regulation, what he termed cooperative federalism, and suggested that wide ranging regulatory actions of the EPA under President Obama often amounted to regulatory overreach. Pruitt framed his stance on regulations as a question of following the rule of law and supporting economic growth.

“As Attorney General of Oklahoma, I saw examples where the Agency became dissatisfied with the tools Congress has given it to address certain issues, and bootstrapped its own powers and tools through rulemaking,” Pruitt said in his remarks, as prepared for delivery. “This, unfortunately, has resulted only in protracted litigation, where the courts suspended most of these rules after years of delay.”

Read More: What You Need to Know About Scott Pruitt, Trump’s Pick for EPA

Pruitt—who sued the EPA 13 times during his tenure as attorney general—faced sharp questions from Democrats on the Senate Environment and Public Works Committee ranging from his close ties to the oil and gas industry to his planned approach to toxic chemical regulation.

The nominee approached most questions with a more moderate tone than Trump and at one point even refuted the President-elect’s characterization of climate change as a “hoax.” But Pruitt’s views on global warming—along with a slew of other issues discussed—still remain incompatible with the view of the vast majority of climate scientists who say that humans are the primary driver of global warming.

Pruitt acknowledged global warming as a reality, but said he was unsure how much humans contribute to the problem. “The climate is changing and human activity contributes to that in some manner,” said Pruitt. “I believe the ability to measure with precision the degree of human’s impact on the climate is subject to more debate.”

Pruitt’s understanding of science also appeared muddy when he said he was unsure the concentration of lead the human body can withstand. The EPA and the Centers for Disease Control and Prevention (CDC) both say that lead is unsafe at any level.

Regardless of Pruitt’s scientific views, he acknowledged that the EPA has an “obligation” to regulate carbon dioxide emissions—the primary contributor to climate change—in order to comply with federal law and court rulings. The statement suggests that the incoming Trump administration will not try to overturn a scientific conclusion from the EPA, known as an endangerment finding, which concluded that the federal government needs to regulate carbon dioxide to protect human health. Because of that finding Pruitt and Trump will need to create their own measure to regulate carbon dioxide emissions if they nix Obama’s Clean Power Plan as the president elect repeatedly promised to do on the campaign trail.

Another tense moment came as Democratic Sen. Edward Markey of Massachusetts challenged Pruitt to commit to recusing himself from the many matters where he has sued the EPA. Pruitt promised only to follow the guidance of the agency’s ethics office.

Republicans on the committee seemed eager to praise the nominee for what they described as appropriate use of the law to protect the environment during his time in Oklahoma. GOP Senator James Inhofe of Oklahoma—who has himself denied the science of climate change—introduced Pruitt as “a defender of the rule of law” and an “expert of balancing economic growth and environmental stewardship.”

Without Republican opposition to Pruitt’s nomination he will likely win easy confirmation, but nonetheless several Democratic senators and environmental groups have expressed ardent opposition to the choice. Opponents of the nomination pointed to a long record of close ties to oil and gas companies as the foremost reason to block his nomination. Pruitt has has received more than $300,000 in contributions from the fossil fuel industry since 2002 and has often supported the interests of those companies in court. In one striking example, he sent a confrontational letter to the EPA with text copied nearly verbatim from language suggested to him by industry lobbyists.

“A public office is about serving the public,” said Sen. Jeff Merkley, an Oregon Democrat, at the Wednesday hearing. “Why do you need an outside oil company to draft a letter when you have 250 people working for you?” 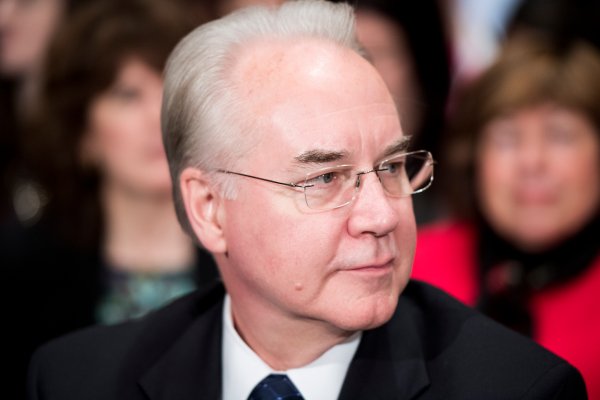