By Julia Lull and Alice Gabriner

In April 2009, I became the Deputy Director of the White House Photo Office. My boss was Pete Souza. His boss was the President. Over the course of two years, I looked at every frame Souza and three other official photographers, Chuck Kennedy, Lawrence Jackson and Samantha Appleton, took – all told about one million images. Because of the Presidential Records Act, nothing is ever deleted. Every image is housed in a database that will be maintained in the National Archives and the Barack Obama Presidential Library.

The entirety of my career has been spent as a photo editor covering news, working on stories about people and issues in far away places. For the first time, at the White House, the story was right outside my door, and in effect, I was part of it. It was like watching a movie unfold on a computer screen, frame by frame. In the most surreal fashion, I could virtually watch a meeting, and then run into the people from that meeting in the hallway.

Every week we made 20×30 prints, called Jumbos, which were hung on the walls of the West Wing, a tradition that dates back to the Nixon era. On “Jumbo Day,” staffers would come out of their offices to see who was featured in the pictures hanging on the walls. These large prints were morale boosters – including for the President – who tells Pete that every new picture of Malia or Sasha is his favorite. Still, the gravitas of one photograph hanging on a wall seems to remind everyone of the historic nature of their roles, even more so than the same pictures being shared on social media and mobile phones.

Revealed in the two million pictures Souza took over the last eight years is a President who pivots nimbly from his responsibilities as Commander-in-Chief to the normalcy of daily life with his family. Souza says that he was not restricted from taking any pictures, nor were his pictures set up. “The pressure is to be on, when the unexpected happens,” he explains in a White House interview with TIME.

January 20 will be Pete Souza’s last day as the president’s official photographer – the culmination of eight years documenting the Obama administration for history. The point of all of these pictures, he explains, is “to have that visual record for generations to come to get a sense of, not just what the presidency was like, but what he was like as a person.”

Souza claims that the best pictures have been released and that there are no surprises to be uncovered in the archive. Yet, having spent my days looking at every image, I know how subjective the act of choosing can be. In fact, I believe that this unprecedented and outstanding historic archive will be examined, interpreted and re-imagined for years to come.

Watch this special edition of our First Take video series above. See the previous videos here.

Alice Gabriner, who wrote this post, is TIME’s International Photo Editor and a former Deputy Director of photography at the White House. 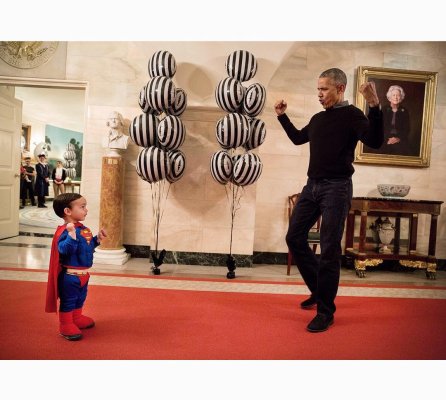 The Photos That Moved Them Most: The Obama Administration
Next Up: Editor's Pick