Lena Dunham: 'I'm Not Interested in Defining Any Other Woman's Feminism'

For as long as she’s been in the public’s eye, Lena Dunham has been an outspoken advocate for Planned Parenthood. While she’s used her star power to campaign for Hillary Clinton and fight for women’s rights, she also recently came under fire for a joke about wishing she’d had an abortion, for which she later apologized. The backlash hasn’t dissuaded her from continuing to help the organization. This week she released a video she produced on the organization’s history and a t-shirt she designed to raise money for the organization.

“I recognize that I’m not everybody’s cup of tea, but I could be as poised and well-spoken as Princess Diana, and if this were my belief system, I would still be receiving threatening messages,” she tells TIME.

TIME spoke to the Girls creator about her advocacy and the role of feminism in today’s culture.

TIME: I think a lot of women assumed the fight for reproductive rights was over — that there was no chance Roe v. Wade might be overturned — and the election was a wake-up call. What was your reaction?

Dunham: It’s challenging. My mother fought for reproductive freedom. It’s still one of her life’s great passions. She was part of a group called Women’s Action Coalition in downtown New York that traveled to health care clinics around the state and made sure to escort and protect the women who were entering and keep them safe from protesters who could at times become violent.

So to realize that we’re actually facing steeper odds now in 2017 than we were in 1991 when my mother and her friends were making those pilgrimages is a very painful reality, but we can’t live in a state of shock and awe. I think the most powerful thing we can do is reject apathy and raise our voices and engage with people who disagree with us and let young women, specifically, know that they do have a say in whether or not their healthcare is taken away from them.

Why did you and your collaborators think that it was important to talk about the history of Planned Parenthood?

And also to really face head-on the controversy that exists around Margaret Sanger as the founder, because very often people who have partial information like to use the less savory parts of Margaret Sanger’s legacy to dismiss Planned Parenthood as a whole. It’s 100 years later, and that’s no longer an acceptable way to interact with this essential organization who has completely distanced itself from the problematic views that Margaret Sanger held, and have only held onto the belief that women have to have ownership and control over their own bodies and health.

You mentioned wanting to engage with people who don’t necessarily hold the same beliefs as you. There’s been some debate about whether an anti-abortion feminist group ought to be involved in the Women’s March during the inauguration. Do you have thoughts on whether you can be both anti-abortion and a feminist?

I never have an interest in defining any other woman’s feminism for them, but I do think it’s very important to remember feminism is a set of political beliefs born out of the idea that women should have certain essential rights, whether it’s the right to vote, the right to own property or the right to make decisions about their own bodies.

I also think a big part of feminism is making room for other women to make choices you don’t necessarily agree with. I have no problem sitting down with someone who feels that abortion is not something that they would personally be able to go through with. I do think that when you step into the territory of trying to limit and control other women’s bodies, to me that’s not a feminist act.

The rhetoric around this conversation can be so charged. You ran into this language problem when you got blowback for a comment about abortion that you made and later apologized for. Do you ever worry that when you’re representing an issue you will polarize people?

I think that the idea that people are going to state their opinions perfectly the first time is just an unrealistic expectation that’s placed not just on public figures but on everyone. It’s important to be able to educate yourself and take in new information. And the fact is, Planned Parenthood is a polarizing issue. It shouldn’t be, but it is. So there isn’t going to be a perfect face of Planned Parenthood because of the amount of people in America who simply don’t believe that women should have ownership and control over their own bodies.

I recognize that I’m not everybody’s cup of tea, but I could be as poised and well spoken as Princess Diana, and if this were my belief system, I would still be receiving threatening messages on the Internet. Do I want to learn to speak better and more concisely and more appropriately about every single aspect of reproductive freedom? Of course. Do I think that there will ever be a perfect advocate of reproductive freedom? There can’t be.

You’ve had a major impact on the culture through Girls, your book, your newsletter Lenny, and you’ve used that platform to campaign for Hillary Clinton and talk about politics. At what point in your career did you decide to leverage your fame to talk about these issues?

There’s politics inherent in the show because there’s politics inherent in women’s lives, but we really don’t think about it as a place to espouse our political beliefs. We’ve obviously tackled topics that are considered by some to be controversial. But we’ve never come at it thinking, “This is going to be our way to convince people to come over to our side of the aisle.”

But I did realize in the 2012 election that I did have an audience of young people who were engaged and empowered but who weren’t necessarily voting. And it was actually encouragement from my writing partner, Jenni Konner, saying you might as well advocate for the things you strongly believe in. To me, that’s the only thing that gives meaning to celebrity. 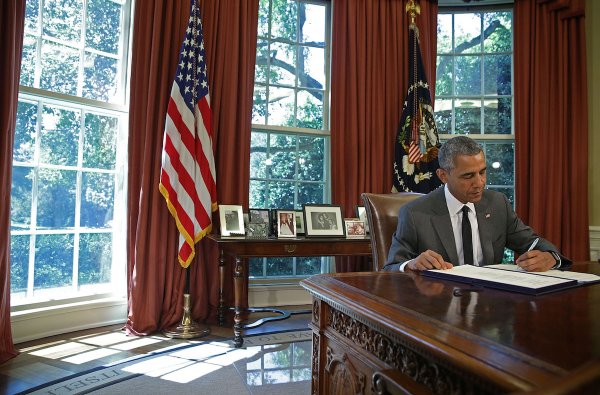 The One Reason We Can't Assess President Obama's Place in History
Next Up: Editor's Pick