Arne Duncan: Obama Should Focus On Our Kids

In 2005, I found myself on the West Side of Chicago—an area challenged by high crime and poverty—with our state’s new U.S. Senator, Barack Obama. At the time, I was chief executive of the city’s public schools, and we were visiting a school that had historically struggled but had since been transformed under new leadership. The community was the same, many of the families and their obstacles were the same, and the students were the same—except now they were thriving in their classes, instead of languishing. Senator Obama wanted to understand why.

A young teacher revealed part of the answer. She told us she had grown tired of what she called These Kids Syndrome: the tendency of some of the previous teachers to look at low test scores and high drop-out rates and make excuses for why “these kids” can’t learn.

This was a clarifying moment—when suddenly you see an issue, and your own role in addressing it, in a new, brighter light. When we begin with this premise—that these are our kids—then their challenges become our collective challenge, and their struggles can’t be written off or explained away. We are forced to abandon the notion that troubled students are the problem—when the real problem is the troubled schools they attend. Our kids weren’t failing us, we were failing them, and it was up to us to fix it.

The challenge was massive. When we visited the West Garfield school, nearly a quarter of students nationwide who entered high school failed to graduate. Half of the nation’s drop-outs were concentrated in some 2,000 high-poverty, low-performing schools where the drop-out rates could reach higher than 40 percent. These schools were mostly located in black and Hispanic communities, widening the already substantial gap in education outcomes. They acquired the name “drop-out factories,” a demoralizing label that stuck.

In 2008, when a newly elected President Obama asked me to become Secretary of Education, we made that big goal—turning around America’s lowest performing schools—one of the pillars of our education agenda. We believed that given the right resources, every child has the ability to learn, no matter how challenging their background or circumstances at home. We also believed that our neighborhood schools didn’t have to be dead-ends; they could be gateways to opportunity.

We were confident that smarter, better policies could make a big difference for our kids.

Today, the evidence makes that clear. Steadily, the nation has made major inroads against its dropout epidemic. We’ve cut the number of drop-out factories by 40 percent, from 1,800 schools to 1,000, and the high school graduation rate has soared to 83 percent—the highest in history. In the past four years alone, we’ve reduced by nearly 30 percent the number of students who fail to complete high school on time. Taken together, these gains translate to more than a million more students—most of them students of color—who have attained their high school diplomas over the course of the Obama Administration.

To help reach this ambitious goal, we took a collaborative approach, providing schools with a range of options and tools to turn themselves around. We worked with states and school districts to develop a more accurate measure of graduation rates and then to transform schools that consistently underperformed. We’ve challenged school leaders to reinvent everything from the length of their school day to the structure of their classrooms—and given them support in the form of a historic $7 billion in School Improvement Grants.

The results have been encouraging: today SIG-supported high schools are improving faster than all other public schools nationwide. In Tacoma, Washington, for example, higher expectations and a renewed focus on students’ needs helped public schools leap off the drop-out factory list and onto the honor roll, as some of the highest performing schools in the state. And in rural Alpine, Alabama, a turnaround effort at Winterboro High School, with an emphasis on digital learning and project-based learning, has jumpstarted the graduation rate from 63 percent in 2009 to 90 percent in 2014.

While some of our other educational initiatives, such the Race to the Top, have commanded more of the spotlight than these efforts have, we and our state and local partners have quietly established a new playbook of what works.

Eight years on, Obama’s time in office is ending (and as for me, I left the administration at the end of 2015 to return to Chicago). But the progress we’ve made can—and must—keep building toward even bigger goals. There should no longer be any question of whether struggling schools can be turned around and whether struggling students can reclaim a real shot at success. Today, hundreds of schools formerly known as drop-out factories are now high-performing graduation gateways, equipping students for success in college, career and life. With these schools as a model, I believe America is ready to commit to an even more audacious goal: eradicating drop-out factories within the next eight years.

This is not a pie-in-the-sky ambition. Over the past decade we cut the number of drop-out factories in half, and over the course of the next administration we can—and must—bring that number to zero. We owe it to the 900,000 students who remain trapped in low-performing high schools and to their communities as well.

Halfway isn’t nearly enough. More than half a century ago, when America faced a polio epidemic, our leaders didn’t aim to cut the number of cases in half; they pledged instead to wipe out the disease. And they succeeded. The epidemic we face today—of education, and opportunity, cut short—is of course different than polio, but the same spirit must apply: We can’t accept anything less than 100 percent.

It’s true that the last mile of any race is often the most arduous. But when Obama leaves the White House, he will have cleared the path for the next administration, regardless of party, to go the distance. This isn’t, after all, a Democratic or a Republican goal; it is, as it must be, a pressing national priority.

An investment in our students’ success is the single most important investment we can make in America’s future. If the next President builds on our progress from the past eight years, then by the time today’s fifth-graders—the future class of 2024—claims their diplomas, our country will have gained an additional 2.3 million high school graduates, who will go on to earn an added $150 billion in lifetime wages. These wages will be a boon for anyone who earns them, for their families and communities, and for our country as a whole. Economists estimate that, nationally, a single class graduating at a rate of 90 percent would contribute an additional $700 million to state and local tax revenue and add $11.5 billion to America’s GDP.

Though Obama will no longer set national policy, he can still play an essential role. For kids—especially those who grow up, as he did, in a single-parent household—he is the ultimate role model; for parents, teachers and policymakers, he will remain a relentless champion for change. He has always been focused on creating opportunity for the next generation, especially for children who grow up in disadvantaged communities. That’s where his heart is. I have every confidence that as a former president, he will continue to inspire the young people of this country and will stay engaged with schools and students for the rest of his life.

In the many years of service that lie ahead for Barack Obama, there will be a lot of adults clamoring for his time and attention. But it’s our kids—the many whose worlds will expand and whose futures will be brighter as a result of his efforts—who will be the ones to write his legacy. 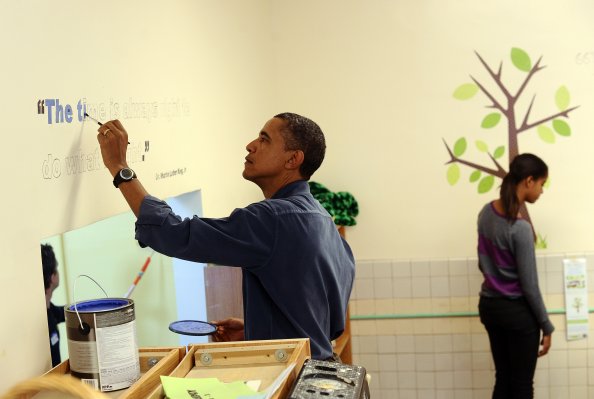 Ai-jen Poo: Obama Should Become Organizer-in-Chief
Next Up: Editor's Pick