Theresa May Sets Britain on Course for a Hard Brexit

U.K. Prime Minister Theresa May has outlined her vision for a U.K. outside the European Union, confirming that Britain will leave the bloc’s single market in order to regain full control of immigration.

May, who has been accused of a “muddled” approach to pulling Britain out of the E.U., laid out a 12-point plan for Brexit in front of an audience of diplomats in London. In a wide-ranging speech, May also said that the U.K. would seek:

The Prime Minister also guaranteed the U.K. Parliament a vote on the final Brexit deal, ahead of a Supreme Court verdict on whether the agreement would need lawmakers’ approval.

She wants to “guarantee the rights of E.U. citizens who are already living in Britain,” but resistance by some member-state governments to provide a quid pro quo guarantee for British citizens living in Europe has meant that no immediate deal has been forged. “I want everyone to know that it remains an important priority to Britain to resolve this challenge,” she said.

May also hopes to find a practical solution that will allow for the free movement across the land border between the Republic of Ireland and Northern Ireland to continue.

The Prime Minister also insisted the E.U.’s long-term survival would be in the best interest of the U.K., the opposite message of populists like UKIP’s former leader Nigel Farage who want the disintegration of the bloc. Donald Trump, who called Brexit a “great thing” during an interview with the London Times and German newspaper Bild, also suggested that other countries would soon leave the bloc of nations.

Unlike the U.S. President-elect, May struck a more conciliatory tone, saying it is in Britain’s interest for Europe to succeed, and calling for a “positive and constructive partnership” between the U.K. and the bloc. “We want to buy your goods, sell you ours, trade with you as freely as possible, and work with one another to make sure we are all safer, more secure and more prosperous through continued friendship,” she said. “We want the E.U. to be a success, and we want its remaining member states to prosper.”

She also echoed Finance Minister Philip Hammond’s suggestion that the U.K. could slash corporation taxes if a deal could not be reached, saying that Britain would be free to create its “own economic model.”

May, who has been in office since July, insists that the country would become a “great, global trading nation” that is “respected around the world and strong, confident and united at home.” She has in the past promised to trigger Article 50, which starts the U.K.’s exit talks, by the end of March. After that is done, Britain will have two years to negotiate its exit terms with the remaining 27 member states.

In the lead-up to Tuesday’s speech, the pound fell to a three-month low on Monday, below the $1.20 mark. But as the Prime Minister was speaking, the pound surged to $1.23.

While relieved that May has finally “taken a position,” Liberal Democrat lawmaker Sarah Olney told TIME that the government is taking Britain in the wrong direction. Olney, who won a special election on a wave of anti-Brexit sentiment in December, criticized May for ignoring the benefits of the freedom of movement.

She also reiterated her party’s call for a referendum on the terms of the Brexit deal. “It is hard to see how a free-trade deal with the E.U. would get us more than what we currently have with the single market,” Olney said.

The referendum result gives May a mandate to push Britain toward a hard Brexit, says pro-E.U. Conservative Party lawmaker Neil Carmichael. He, however, believes that Britain could avoid the path May has set out for it. “We did vote for control over immigration, but we did not vote for a smaller economy,” he told TIME. “If it comes to pass in a year or two, of course there may well be an appetite for reconsideration.” 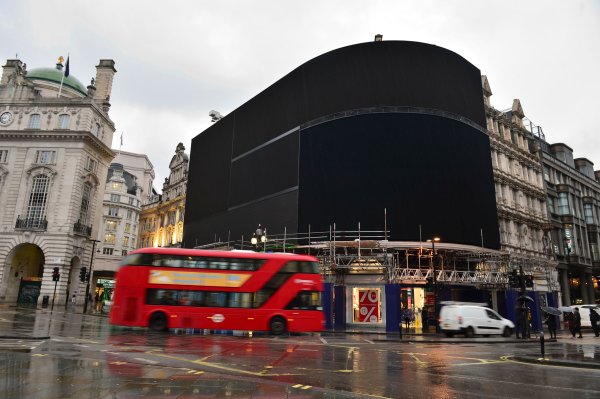 London's Piccadilly Circus Goes Dark for a Few Months
Next Up: Editor's Pick