Quiz: See If You Remember How to Write in Cursive

Jan. 23 is National Handwriting Day, invented by the Writing Instrument Manufacturers Association in 1977 and pegged to John Hancock’s birthday. On this day, Big Pen encourages you to “use a pen or a pencil to rekindle that creative feeling.”

The following interactive tests your handwriting by challenging you to draw cursive letters on the screen and comparing them to the standard version that was taught in elementary schools for decades. Remember, lowercase letters sometimes dip below the bottom of the composition lines, while uppercase letters (and a few lowercase ones) go above the dotted middle line, like so:

To play, just draw the letters with your mouse or finger on the blank chalkboard below and we’ll compare your letter to the one commonly taught in schools.

If you had any trouble, don’t despair. The death of cursive has not been exaggerated. And if writing all of your office memos by hand for a day feels too daunting, I have a tip: If you’re on a Mac, you can still vex your colleagues by changing the font of all your emails to “Brush Script,” a cursive typography that, like most of our handwriting, is largely inscrutable.

Cursive was taught differently over the decades, so there is no one authoritative version. This feature uses the D’Nealian script, a common version designed to ease the learning process for younger students. Entries are scored by comparing the pixels in the user-generated letter with those of the “correct” version. Curves are counted as matching even if they are slightly misaligned since not everyone writes at precisely the same slant. 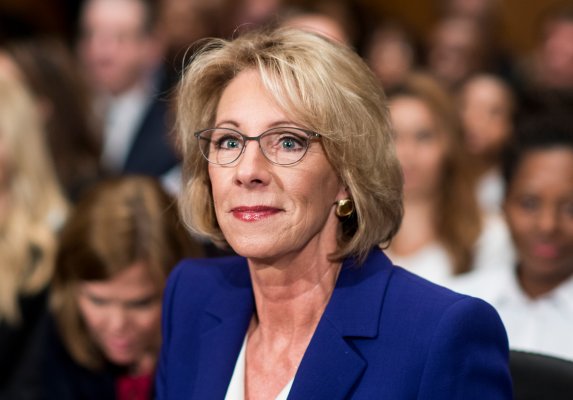 Here's a Look at the Education Questions Betsy DeVos Struggled to Answer
Next Up: Editor's Pick