A Florida newborn taken from her family in the hospital more than 18 years ago has been located living with her alleged abductor, who she believed to be her mom, law enforcement announced Friday.

On Friday, Jacksonville Sheriff Mike Williams said at a news conference that Kamiyah had been found in Walterboro, South Carolina, living under a false identity apparently created for her following her abduction.

He said Kamiyah’s biological parents were overjoyed at the news of her discovery: Her mother was “elated.” He noted that Kamiyah has not been reunited with her parents yet and said any decision about such a reunion was solely up to her as an adult.

The woman who Kamiyah believed to be her mother, Gloria Williams, was arrested Friday and charged with first-degree kidnapping and third-degree interference with custody, prosecutors said.

Gloria Williams was arrested at her home in Walterboro, Sheriff Williams said. Kamiyah was not present.

Kamiyah’s disappearance in 1998 made national news and continued to garner attention as it turned cold over the years, becoming the rarest of rare things: a child’s hospital abduction that was never solved.

That changed this week, when on Thursday night authorities confirmed Kamiyah’s identity after they were led to her by a series of leads beginning late last year, Sheriff Williams said.

He said Kamiyah has had “some inclination” beginning several months ago that she may be involved in the case but otherwise “appears to be a normal 18-year-old young woman.”

Sheriff Williams declined to identify Kamiyah by the identity under which she has been living for so many years, out of respect for her privacy.

“She’s going to need time and assistance to process all of this,” he said.

He stressed that many questions remain in the case and that the investigation is in its early stages. “A case like this we have not seen in this country in a long time,” he said.

Indeed, statistics show that such hospital abductions rarely resolve this way. In 2015, a Nevada man learned that he had actually been stolen from his birth parents in the hospital and then abandoned before being adopted.

It was not immediately clear if Gloria Williams has entered a plea or retained an attorney or if she has been extradited from South Carolina. 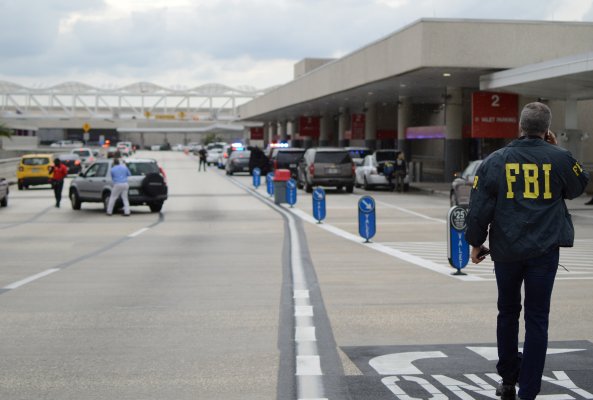 Rainbow Appears Over Fort Lauderdale Airport After Mass Shooting
Next Up: Editor's Pick