This Is HTC's Latest Attempt To Take On Apple and Samsung

HTC is launching a new smartphone with a virtual assistant that it says can make suggestions without being prompted, the company announced on Jan. 12. The phone costs $749, about the same as most premium smartphones, and will begin shipping in mid-March.

The phone, called the U Ultra phone, will include a new virtual aide called the HTC Sense Companion. That new feature comes after both Apple and Google have made significant improvements to their own respective digital helpers over the past year. HTC is touting its AI aide as a proactive assistant that can show relevant reminders and alerts throughout the day, similar to what Google Now has been doing for years. It can, for example, use weather data to suggest to dress warmly or to leave earlier than usual for work if snow is forecasted.

But based on HTC’s claims, it sounds like Sense Companion goes a step further than just making suggestions based on a user’s calendar or preferences. The company says that its AI can make a restaurant recommendation and reserve a table on the owner’s behalf, for instance. It’s unclear if the phone will have this functionality at launch or if it will be available later in 2017, as HTC’s website notes that it “may not be installed” on the phone. (Facebook is working on a digital assistant known as M that is said to offer similar functionality, but it’s unclear when or even if M will ever be widely available.) The Sense Companion also supports voice recognition and can answer requests even when the phone is asleep, like Apple’s Siri and Google’s Assistant.

The HTC Ultra’s other distinguishing characteristic is its second screen, which sits just above the main display and runs along the top of the phone. With this additional screen, HTC is hoping to give phone owners a way to set aside extra real estate for quickly accessing favorite contacts and apps without distracting users from what’s on the primary screen. Samsung offers a similar feature on its lineup of Edge smartphones, which include a curved side screen displaying similar shortcuts.

HTC is also playing up the camera on its new smartphone, which has a 12-megapixel sensor and a DxOMark rating of 88. That’s higher than the iPhone 7’s score of 86, but lower than the Google Pixel’s 89. (DxOMark measures the performance of a camera’s lens and sensor; higher scores indicate better overall camera quality.) The phone also comes with a 16-megapixel front-facing camera for snapping selfies, which is a notably high resolution compared to competing phones.

HTC has improved on its design as well, introducing a new sleeker, glossy look compared to the HTC 10’s brushed aluminum. The phone also has a 5.7-inch screen, making it slightly larger than the 5.5-inch iPhone 7 Plus and Google Pixel and the same size as Samsung’s discontinued Note 7. It lacks a headphone jack, like several newer smartphones (including Apple’s iPhone 7), and instead features a USB Type-C port. Headphones are also included in the box.

The U Ultra is the struggling electronics maker’s latest attempt to grab a slice of the smartphone market from Apple and Samsung, after recently revealing that its total revenue had fallen by more than a third during 2016. HTC has an opportunity to rebound and capture the phablet market with its U Ultra, catering to those who may have otherwise opted for Samsung’s problem-plagued and discontinued Note 7. 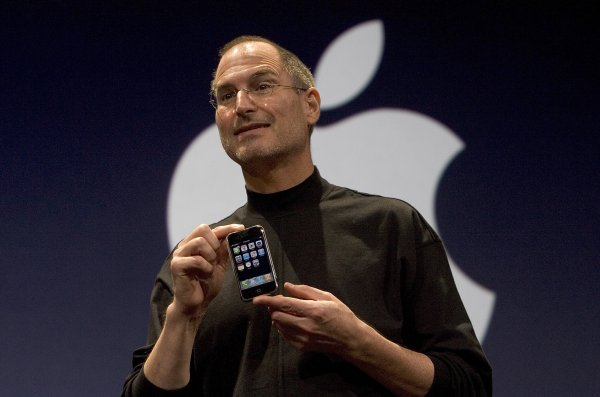 Watch Steve Jobs Unveil the First iPhone 10 Years Ago
Next Up: Editor's Pick