The White House driveway is covered in snow in Washington, on Jan. 7, 2017.
Joshua Roberts—Reuters
Ideas
By Kate Andersen Brower
Brower is the author of First Women: The Grace and Power of America's Modern First Ladies and The Residence: Inside the Private World of the White House

When President Barack Obama was first introduced to the residence staff at the White House—the approximately 100 maids, butlers, chefs, florists and ushers who make it tick—he had a look of surprise on his face. Like most people, he never realized how many people it takes to handle the 55,000-sq.-ft. Executive Mansion. When First Lady Michelle Obama introduced her East Wing aides to the residence staff in the elegant East Room, she told her team, “We are on their ground now.” The Trumps would be wise to turn to these staffers who have helped make the imposing building feel like a home for every First Family since John and Abigail Adams.

“You really don’t know what you don’t know until you’re here,” Michelle Obama said in a recent interview. But the Trumps are used to having household staff, and Melania Trump will not be moving to Washington for at least the first several months, so in some ways their transition may be easier than it was for the Obamas, who came from a less gilded life. While some staffers are worried that the President-elect might replace them with his own cadre of butlers, maids and cooks, most are committed to staying put.

The White House is much bigger than it looks. There are really six floors with two small mezzanine levels: two belowground floors; the ground floor, where the main kitchen is located; the State Floor (or the first floor); two mezzanine levels with the chief usher’s office and the pastry kitchen; the second floor (family living quarters); and the third floor (also family living quarters). The Trumps are used to living lavishly in a three-story penthouse at Trump Tower, among other homes, and may even find the living quarters rather modest.

Melania Trump should ask Michelle Obama and her East Wing staff for guidance. There are many unspoken rules and traditions. When Michelle arrived for her first tour of the residence, she brought along an aide. Laura Bush gently told the aide to stay behind. “This is really for Michelle and I,” she told her. Bush’s East Wing staffers were surprised when Michelle presented Laura with a leather-bound journal on the morning of the Inauguration. She knew that Laura was working on her memoirs, but it was not part of the protocol of the highly choreographed day. While they can make changes to the residence, the Obamas learned that certain tweaks would have to wait. Admiral Stephen Rochon, who was then chief usher of the White House, told them that their request to close up a wall in Malia’s room to give her more privacy would have to wait for approval. Other requests are not so hard to fulfill. “The President wanted a rainfall showerhead,” said Rochon. “And I could understand why. I like those too!”

The residence staffers would do anything to make the transition easier for the incoming family. After they watched the Inaugural parade on Pennsylvania Avenue, the Obamas grazed on a buffet in the Old Family Dining Room. Weeks before, then social secretary Desirée Rogers collaborated with White House florists to decide what kind of arrangements would sit on the cabaret tables in the dining room and what kind of candelabras they would use.

One night when Chelsea Clinton was sick, Hillary Clinton went into the eat-in kitchen that she had created on the second floor and set about making her daughter scrambled eggs. A butler looked on warily as the First Lady searched for a frying pan. “Oh, we’ll bring an omelet from downstairs,” the butler said. “No,” she told him. “I just want to make some scrambled eggs and applesauce and feed her what I would feed her if we were living anywhere else in America.”

President Bill Clinton was similarly annoyed with some traditions. He was furious when a staffer, hoping to be helpful, decorated the family’s Christmas tree one year. He had wanted to decorate it with Chelsea.

When Alonzo Fields, who was a White House butler from 1931 to 1953, called the transition from one President to the next “as sudden as death,” he was describing the grief felt by the butlers, maids, chefs and florists who have to say goodbye to a family they have grown close to over several years.

President George H.W. Bush was too overcome with emotion to say goodbye to the staff gathered in the State Dining Room the morning of the Inauguration. Before they left for the Capitol swearing-in ceremony, Barbara Bush raced through the Red and Blue rooms to hug all the butlers privately. “From then on, it was all downhill,” she said. “The hard part for me was over.” Residence staffers don’t have time to dwell—they have roughly six hours between the swearing-in and the Inaugural parade to unpack the new First Family. 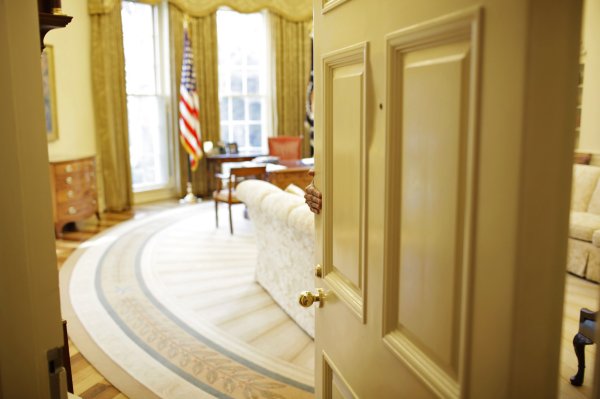