Ex-U.N. Chief Ban Ki-Moon Is 'Perplexed and Embarrassed' by His Relatives' Bribery Case

Ban Ki-Moon, then secretary general of the United Nations, adjusts his glasses during a news conference on the sidelines of the Group of 20 (G-20) summit in Hangzhou, China, on Sunday, Sept. 4, 2016.
Qilai Shen/Bloomberg via Getty Images
By Christine Kim / Reuters

SEOUL, Jan 12 (Reuters) – Former United Nations chief Ban Ki-moon, who is expected to run for president of South Korea, said he was “perplexed and embarrassed” over bribery accusations brought by U.S. prosecutors this week against his brother and nephew.

Ban‘s younger brother Ban Ki-sang and his nephew Joo Hyun Bahn were accused in a Manhattan federal court on Tuesday of a scheme to bribe a Middle Eastern official for an attempted $800 million sale of a building complex in Vietnam.

“I am perplexed and embarrassed that close members of my family have become involved in something like this. I feel it is regrettable the situation has troubled many,” Ban told Korean reporters at John F. Kennedy International Airport on Wednesday ahead of his departure for South Korea.

“I had absolutely no knowledge. My nephew is grown and I barely had any involvement in his life or how he does business,” he said in remarks broadcast on South Korean TV.

Ban, who was accompanied by his wife Yoo Soon-taek as well as an aide and security staff, according to Yonhap News Agency, said his heart “felt like bursting” with excitement at the thought of returning to South Korea. His Asiana Airlines flight will land at around 0800 GMT on Thursday.

A former foreign minister, Ban has not declared his intention to enter the race to succeed President Park Geun-hye, who was impeached by parliament in December over an influence-peddling scandal.

Controversy around the building deal linked to Ban‘s relatives had been reported previously in South Korean media and Ban made similar remarks regarding the case in 2015.

In September, a Seoul district court ordered Ban‘s nephew to pay civil damages of about $590,000 to builder Keangnam Enterprises. The court said the nephew had fraudulently led Keangnam to believe that the Qatar Investment Authority was close to buying the Vietnam skyscraper.

In emails cited in the U.S. indictment, Ban‘s nephew is shown to be using the family name in an attempt to secure the deal, and expressed concern that negative media coverage if it fell through would be bad for the family given its prominence.

Ban Ki-moon was not mentioned in the indictment.

His nephew Bahn, a 38-year-old South Korean national living in New Jersey, pleaded not guilty during a Tuesday court hearing. His father was not arrested and could not be reached immediately for comment. 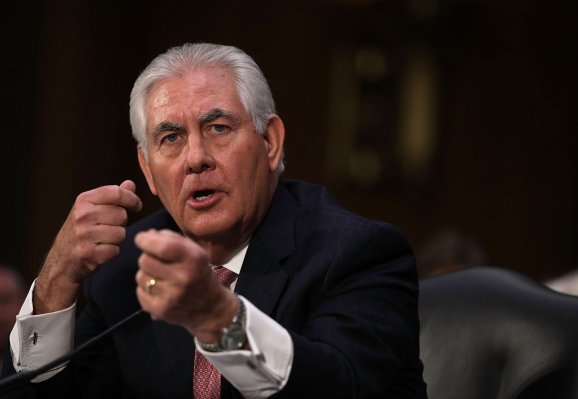 Tillerson Sets Up Clash With China
Next Up: Editor's Pick