(WASHINGTON) – U.S. President-elect Donald Trump’s nominee for secretary of state set a course for a potentially serious confrontation with Beijing on Wednesday, saying China should be denied access to islands it has built in the contested South China Sea.

In comments expected to enrage Beijing, Rex Tillerson told his confirmation hearing before the U.S. Senate Foreign Relations Committee that China’s building of islands and putting military assets on those islands was “akin to Russia’s taking Crimea” from Ukraine.

Asked whether he supported a more aggressive posture toward China, he said: “We’re going to have to send China a clear signal that, first, the island-building stops and, second, your access to those islands also is not going to be allowed.”

The former Exxon Mobil Corp chairman and chief executive did not elaborate on what might be done to deny China access to the islands it has built up from South China Sea reefs, equipped with military-length airstrips and fortified with weapons.

Trump’s transition team did not immediately respond to a request for specifics on how China might be blocked from the artificial islands.

Tillerson also said Washington needed to reaffirm its commitment to Taiwan, which Beijing regards as a renegade province, but stopped short of Trump’s questioning of Washington’s long-standing policy on the issue.

“I don’t know of any plans to alter the ‘one China’ position,” he said.

Tillerson said he considered China’s South China Sea activity “extremely worrisome” and that it would be a threat to the “entire global economy” if Beijing were able to dictate access to the waterway, which is of strategic military importance and a major trade route.

He blamed the current situation on what he termed an inadequate U.S. response. “The failure of a response has allowed them just to keep pushing the envelop on this,” Tillerson said.

“The way we’ve got to deal with this is we’ve got to show back up in the region with our traditional allies in Southeast Asia,” he said.

Democratic President Barack Obama’s administration conducted periodic air and naval patrols to assert the right of free navigation in the South China Sea. These have angered Beijing, but seeking to blockade China’s man-made islands would be a major step further and a step that Washington has never raised as an option.

Under his strategic “pivot” to Asia, Obama has increased the U.S. military presence in the region, and Trump has vowed a major naval buildup.

Obama has sought to forge a united front in Southeast Asia against China’s pursuit of its territorial claims, but some allies and partners who are rival claimants have been reluctant to challenge Beijing.

“They’re taking territory or control, or declaring control of territories that are not rightfully China’s,” he said.

Tillerson also said the United States could not continue to accept “empty promises” China had made about putting pressure on North Korea over that country’s nuclear and missile programs.

He said his approach to dealing with North Korea – which recently declared it is close to carrying out its first test of an intercontinental ballistic missile – would be “a long-term plan” based on sanctions and their proper implementation.

Asked if Washington should consider imposing “secondary sanctions” on Chinese entities found to be violating existing sanctions on North Korea, Tillerson said: “If China is not going to comply with those U.N. sanctions, then it’s appropriate … for the United States to consider actions to compel them to comply.”

He accused China of failing to live up to global agreements on trade and intellectual property, echoing past remarks by Trump, who has threatened to impose high, retaliatory tariffs on China. But Tillerson also stressed the “deeply intertwined” nature of the world’s two biggest economies.

“We should not let disagreements over other issues exclude areas for productive partnership,” he said. 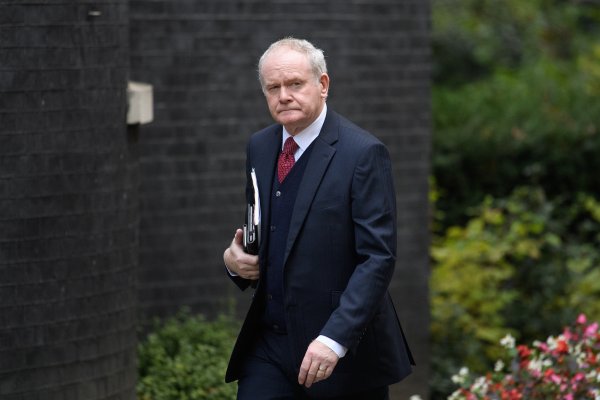 Northern Ireland in Political Crisis as Brexit Looms
Next Up: Editor's Pick