To listen to Rex Tillerson’s grilling in the Senate, the Secretary of State’s portfolio under incoming President Donald Trump comes down to one challenge: Russia.

Tillerson, the former CEO of ExxonMobil and a government neophyte, faced tough questions during a Senate Foreign Relations hearing — including from Republicans who are outraged about Russia’s efforts to determine the outcome of last year’s presidential race. For hours, Tillerson endured marathon questions about how the Trump Administration will interact with a rival that has taken unprecedented steps to put its thumb on the scales of American democracy.

Tillerson’s curt reply: “I would not use that term.”

It was one of the most dramatic moments of the hearing and emblematic of lawmakers’ skepticism for a nominee who has never before served in government. Many lawmakers have been dubious that Tillerson, a businessman who has made deals around the globe and with Russia, should be the nation’s top diplomat, or that Trump can be trusted to deal with Putin in a responsible manner.

“Russia today poses a danger but it is not unpredictable in advancing its own interests,” Tillerson said at the start of a day of testimony that was so rocky that Democratic Senator Jeanne Shaheen of New Hampshire joked that she was surprised the nominee came back for a second round after lunch.

“I hope Mr. Putin gets to know both of you guys really, really well,” said Senator Jim Risch, a Republican from Idaho. “That will impress him, that he’s not going to get away with the kinds of stuff he has gotten away with.”

Putin’s Russia is seen as a belligerent bully and serious threat to Western nations. Its annexation of Crimea, its efforts to undermine election in places like Sweden and its military support for the brutal regime in Syria all have earned Russia plenty of scorn from the current Administration. Trump, however, has shrugged it off and, at some points, has gone as far as to question if Putin really was behind the hacking of the Democratic National Committee computers.

That dynamic put Tillerson in a difficult position of acknowledging geopolitical realities and his boss’s indifference to them. At many points during his hearings, Tillerson defaulted to a desire to learn more himself. Tillerson has yet to receive a security clearance.

Rubio, a onetime Trump rival for the Republicans’ White House nomination, came prepared to needle Tillerson. Rubio described Russia’s role in bombing civilians in Aleppo, Syria, and murdering Putin foes. Tillerson said he would “want to have much more information before reaching the conclusion.”

Rubio said he was “disappointed” in Tillerson’s reply. “None of this is classified. These people are dead,” Rubio said.

During a later exchange, Rubio pushed Tillerson to say he would reverse President Obama’s loosening of restrictions on Cuba. Tillerson’s refusal to promise only hurt his odds with Rubio, who is hawkish on the nation where his parents were born.

In discussing Putin’s role in Syria, Senator Rob Portman of Ohio expressed skepticism over Russia’s involvement. “My sense is that Russia has not followed through,” the Ohio Republican said.

Tillerson was largely deferential. “We will have to see what Russia’s posture is,” Tillerson said.

On the floor of the Senate, minority leader Chuck Schumer mocked Tillerson’s performance and telegraphed his party’s opposition. “You don’t need a classified briefing to know what Russia has done in the past,” the New York Democrat said. “To duck the question and refuse to commit to continuing these sanctions is tantamount to sweeping international laws under the rug. It says, ‘Go ahead, interfere in our elections again. Nothing will happen to you.'”

The Senate Foreign Relations Committee is split, 11 to 10, meaning Republicans cannot afford any GOP defections if Democrats unite against Tillerson.

Republicans who do not have seats on the committee, too, are unsure about the Tillerson pick. Notably, Senators John McCain and Lindsey Graham — both Russia critics — have been noncommittal on Trump’s selection. The Democrats are looking to derail Trump’s nominees, and Republicans have just 52 seats in the Senate.

Trump’s reliable allies have been pushing Republican lawmakers to fall in line on the selection of the wealthy business executive. In memos sent around the Capitol, they talk about Tillerson’s record at Exxon, his work with the Boy Scouts and familiarity with global leaders.

Democrats have been unimpressed. “Diplomacy is not the same as dealmaking,” said Senator Bob Menendez, a former panel chairman and a New Jersey Democrat. 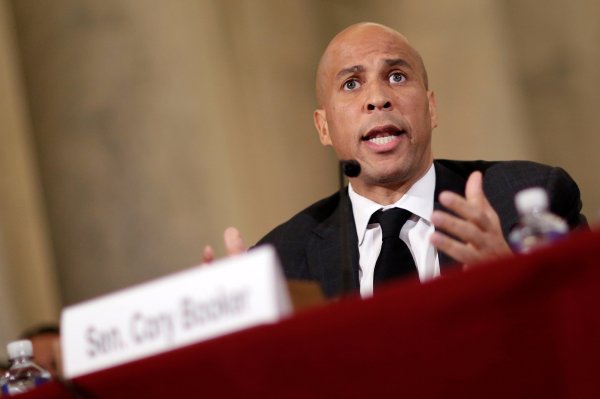 Booker Preps 2020 Run at Sessions Hearings
Next Up: Editor's Pick