A couple weeks ago, I gathered my family for a cross-country flight back to my hometown for the holidays, where I subjected them to all sorts of dad torture. First, there was the iPad jammed full of Pixar movies that my son watched Clockwork Orange-style on the plane. Then there were the naptimes during which I repeatedly told my son that “this was daddy’s room when he was a little boy,” like the toddler even cared. And there were the drives around town where I’d point out the window towards the ghost of a former baseball card shop or movie theater and say, “I used to ride my bike all the way here by myself — can you believe that?”

How times have changed. Just a few days later at CES, Las Vegas’s annual tech industry gathering, some of those changes were on full display. Consumer tech, generally speaking, tries to make our lives easier — so it makes sense that some of the hottest items on display this year were aimed at busy parents, whose lives are anything but easy. But these new gadgets pose a time-old question: How much parenting should you surrender to gizmos, and how much should you do yourself?

The first CES gadget to say “Dad, hey dad, dad, daddy, dad look, DAAAD!” to me was Fisher-Price’s Think and Learn Smart Cycle. An exercise bike for pre-schoolers, the Smart Cycle comes equipped with a tablet mount and an accompanying app. The idea is that kids can pedal the juice boxes out of their system while pouring Nickelodeon-based apps like Blaze and SpongeBob into their eyeballs. It’s as if the makers of the iPotty thought, “If only there was a way to make redesign this product, but without a toilet.”

Looking more broadly at the Smart Cycle, the sad truth that this product reveals is that toy-makers think parents would rather strap kids in for a ride through an app than around their neighborhood. That might sound safer, but long-term crime trends show that today’s kids are much less likely to get into danger than when I was zipping around town on my Schwinn. Instead, tech should focus on developing digital helpers for parents — like low-cost GPS trackers or easy-to-use messaging devices — so we can let our children go off and be kids while staying assured that they’re safe.

The living room isn’t the only place gadget makers want to engage with kids. Mattel, under the brand name Nabi, introduced a new connected kid’s room device named Aristotle — which could not be more intrusive if it picked my son’s nose for him. Aristotle’s goal is “to aid parents and use the most advanced AI-driven technology to make it easier for them to protect, develop, and nurture the most important asset in their home—their children.” First, my children are not an asset — technically, according to the IRS, they are deductibles. Second, call me old fashioned, but I don’t want technology nurturing my little ones.

From a technological perspective, Aristotle is so impressive that TIME picked it as one of its top devices of CES. A combination smart light, smart device hub, Wi-Fi camera, and speaker system, it can play a lullaby and dim the lights when it hears your baby crying, light up red or green when quizzing your toddler on a voice-activated learning lesson, and teach your little ones to say “please” (it will only respond if they use the magic words.) But as a parent with a Dropcam, smart lights, and other gadgets helping keep an eye on my nursery, let me tell you how Aristotle will actually work: Your kid will get freaked out when the light seems to change for no reason. Over-reliance on the webcam will give you the new hobby of obsessing over your Wi-Fi connection. And you’re going to have to start saying please to your voice-enabled assistants, too, unless you want to teach your kid to be a pushy jerk. Beyond that, you’ll begin to wonder if all this technology is necessary, especially when your baby wakes up in the night and you go soothe her, because that — and not engineering around that — is what parenting is all about.

Of course, no CES would be complete without robots, and this year’s droids don’t disappoint. The bot of the ball at CES was Kuri, a giant, roving board game piece with a Wi-Fi camera, Bluetooth, and a lot of personality. Engineered by the Bosch-backed Mayfield Robotics, the $700 device is designed to be a robo-nanny, keeping an ear and an eye out for anything that might be amiss. And with children, that tends to be a lot. But watching children is a feat every generation has mastered, and there’s no reason for robotic help now.

Ultimately, the tech and toy industries seem to be missing that parenting isn’t a problem to be solved with gadgets. Instead, it’s a journey that can be made easier with the right help. I’m all for gadgets that make my life as a father easier — but not ones that try to do the job for me. 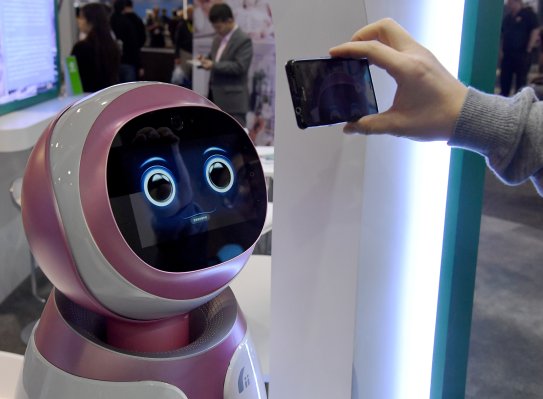