'Lace Up Your Shoes and Organize': Watch Obama's Push For Participation in Politics

President Barack Obama left the stage in Chicago Tuesday night much as he entered the national spotlight eight years ago; as a determined agent of social change with a message for future generations.

In his emotional farewell address, Obama called on the nation’s young and “young at heart” to pick up where he left off, pushing for social and political progress through grassroots and political involvement. Warning that democracy is at risk without maintenance, the President called on U.S. citizens to assess their own role in politics and community life.

“It falls to each of us to be those anxious, jealous guardians of our democracy,” Obama said. “Embrace the joyous task we have been given to continually try to improve this great nation of ours because, for all our outward differences, we in fact all share the same proud type, the most important office in a democracy, citizen.”

Read more: In His Farewell Speech, President Obama Returns to His Roots as a Community Leader

In an age of online spats and with an incoming Commander-in-Chief who typically addresses the public through social media, Obama urged his supporters to reach out to those with whom they disagree, suggesting, “If you’re tired of arguing with strangers on the Internet, try talking with one of them in real life.”

Obama’s own political involvement began as a community organizer working for tenants’ rights and voter outreach in the South Side of his adoptive hometown, Chicago. Drawing on his own experience, Obama, the first African American President in U.S. history, sought to remind Americans that they’re not so different from their leaders.

“If something needs fixing, then lace up your shoes and do some organizing,” the President implored. “If you’re disappointed by your elected officials, grab a clip board, get some signatures, and run for office yourself.”

The surprising scope of his own political rise and watching the political process up close “can energize and inspire,” Obama said. “And more often than not, your faith in America and in Americans will be confirmed. Mine sure has been.” 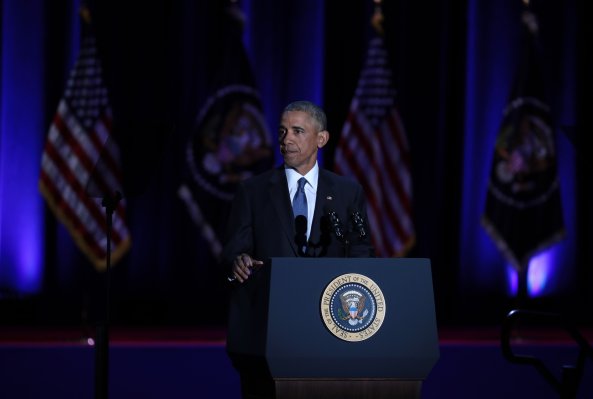