In His Farewell Speech, President Obama Returns to His Roots as a Community Leader

President Obama’s Tuesday evening remarks were billed as a requiem for his time in office, the last time he would address the nation while holding the title as Commander in Chief. But the 50-minute speech he delivered was more of a call to action: the last major political rally of his career. On a stage befitting a presidential victory rally, with a massive presidential seal overhead and a never-ending row of flags lining the stage, President Obama delivered a fierce speech urging action, as well as a subtle warning, just days before the inauguration of his successor.

A few minutes into the speech, it became clear why the President opted to deliver the speech from a stage in his adoptive hometown of Chicago rather than deliver a traditional Oval Office address or speak from a lectern in the White House. The former community organizer wanted to tap into his roots, revive the spirit of the young guy who worked for tenants’ rights and later registered voters on the city’s South Side. Chicago is “where I learned that change only happens when ordinary people get involved, get engaged, and come together to demand it,” he said Tuesday. And it’s that message he sought to drive home with the rowdy audience gathered in McCormick Place and the viewers tuning in at home.

“You were the change. You answered people’s hopes, and because of you America is a better, stronger place than it was when we started,” Obama said Tuesday. “It is up to all of us to make sure our government can help us meet the many challenges we still face.”

The President said it is his belief that the beginning of the 21st century has joined the moments in history that threaten the solidarity of the U.S. because of the “shrinking world,” demographic change, the threat of terrorism and widening inequality. That belief was likely fortified by the results of the 2016 presidential election, which handed victory to a man whose values stand in stark contrast to the current President’s. But the way we respond to those issues, he said Tuesday, will determine the future of the country.

Here was his case: by failing to create opportunity for all Americans, divisions will harden; we have to get to a point where we recognize that we’re our brothers’ and sisters’ keepers; as a society we’ll need to find some common ground, regardless of party or affiliation; and if we take our democracy for granted, it will fail. In a stem-winding address — part farewell, part admonition — the President defended climate science, denounced racial and ethnic divisions, declared Russia’s influence weak and called for citizens and politicians alike to stand up for democracy.

Obama sought to deliver an address that would stand alongside the most consequential speeches of his political career. The effort that went to its construction was made clear by the White House. During Monday’s press briefing, White House press secretary Josh Earnest said the President would be working on the speech well into Tuesday afternoon. In the lead-up to the speech, social-media accounts connected to the White House shared images of the President and his speechwriters hard at work, even while on board Air Force One. In a letter to supporters, the President said he drew inspiration from the farewell address delivered by our nation’s first President, George Washington, a document so lauded by politicos and historians alike that it is read in its entirety on the Senate floor every year on Washington’s birthday. That document, like Obama’s speech, was largely a set of instructions for future generations of leaders.

But after 45 minutes, it began to feel like goodbye. Following all of the tough talk on the future, the President acknowledged the people who have been by his side all eight years. Through tears, he turned to First Lady Michelle Obama, who sat smiling as the crowd cheered around her. “You have made me proud and you made the country proud,” he said.

“Of all that I’ve done in my life, I’m most proud to be your dad,” he told his daughter Malia, who represented both of the First Children at the event — Sasha was not in attendance because she had an exam. He called Vice President Joe Biden “the first decision I made as a nominee and the best,” adding that in choosing him as his Vice President he gained a brother. He noted the work of his staff who he said he has watched “grow up, get married, have kids and start incredible new journeys of your own.” And to the American people, the President said thank you. “My fellow Americans, it has been the honor of my life to serve you,” he said. “Yes, we can. Yes, we did. Yes, we can. Thank you.” 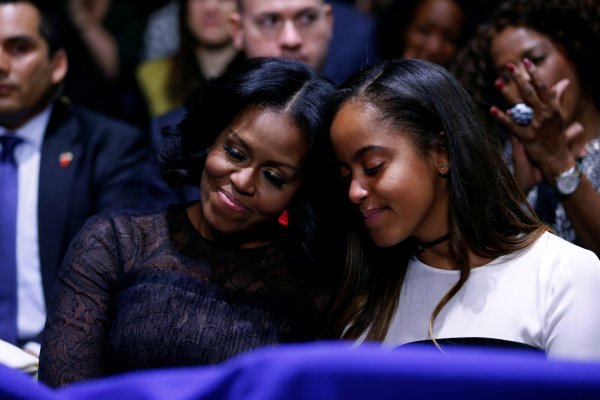 Watch President Obama's Touching Tribute to His Family
Next Up: Editor's Pick