This Is Why the Obama-Biden Bromance Is Surprising

President Barack Obama had his audience in tears on Thursday when he surprised his Vice President and “brother” Joe Biden by awarding him the nation’s highest civilian honor, the Presidential Medal of Freedom with Distinction, something the three presidents before him reserved for Pope John Paul II, President Ronald Reagan and General Colin Powell.

Obama described Biden as “the best Vice President America’s ever had” and said that selecting Biden as his running mate was “the best possible choice, not just for me but for the American people.” In an interview that aired the same day, Biden told NBC’s Andrea Mitchell of their special relationship—”I don’t like him, I love him,” he said—and recalled that the President had even offered him personal financial help as his family dealt with the illness and subsequent death of Beau Biden.

It’s no secret that the Obama-Biden friendship (and the ones between the First Lady Michelle Obama and Second Lady Jill Biden and the Obamas’ daughters and Biden’s granddaughters) is a rare one, though they are certainly not the only President and Vice President to share a bond that goes beyond professional obligation.

See the Obama-Biden friendship in photos

A look back at the history of those friendships illustrates just how hard they are to pull off. So, as the two prepare to vacate the White House with Donald Trump’s inauguration on Friday, historians say there are solid reasons why few Executive Branch pairs have enjoyed such a tight relationship—and why it’s not something the U.S. is likely to see again soon.

Strangers in the White House

One reason why early VPs weren’t often buddies with Presidents is that, in the earliest days of the republic, the Vice President was whoever came in second for President, which meant that the two men had necessarily been rivals. And for more than a century after that problem was solved by the 12th Amendment in 1804—until Franklin Delano Roosevelt made it clear that he wanted Henry Wallace to be his running mate in 1940—presidents generally didn’t pick their running mates. The party did. In some cases, they didn’t even know them before party leaders announced the decision.

“When the party chose the Vice President, then the chances of you finding a life-long buddy were much less,” says Doris Kearns Goodwin, Pulitzer Prize-winning presidential historian.

So it was even more impressive that Rutherford B. Hayes, the 19th U.S. President, and his Vice President William A. Wheeler, who didn’t know each other before getting paired together on the Republican ticket, literally had sing-alongs on Sunday evenings. According to Nan Card, the curator of manuscripts at the Rutherford B. Hayes Presidential Library & Museums, Wheeler would bring over the hymnals, Secretary of Interior Carl Christian Schurz would play the piano, and the Secretary of the Treasury John Sherman and his older brother General William T. Sherman would join in the singing with their wives and the President. The Hayes family took Wheeler under their wing, as he was a recent widower. In fact, in 1878, Wheeler fueled rumor mills when he took First Lady Lucy Hayes and her daughter Fanny on a “wild and joyous” fishing outing in the Adirondacks.

Another tight foursome could be found among William McKinley and First Lady Ida McKinley and Garret Hobart and his wife Jennie. Whenever the President had to travel, Jennie came to Ida’s side. The President trusted the Vice President so much that he gave Hobart, a wealthy corporate lawyer, a portion of his presidential salary to invest, according to Christopher Kenney, Education Director of the William McKinley Presidential Library & Museum and author of The McKinley Years: The Life and Times of our 25th President. When Hobart died suddenly of a heart attack on Nov. 21, 1899, it was not only a great loss for the country, but a great personal loss for the McKinleys.

But, despite the system of selecting a Vice President, even in the 19th century it was clear that friendship in the White House could be mutually beneficial for President and Vice President alike.

Take, for example, President Andrew Jackson and his Vice President Martin Van Buren, who would exercise together by going on horseback rides in and around Washington. They first became friends when Van Buren was Secretary of State during Jackson’s first term, thanks to scandalous rumors circulating in Washington about the promiscuity of Peggy Eaton, the wife of Secretary of War John Eaton. Jackson saw the rumors as a slander campaign against his administration, and those who believed them as his enemies. So Van Buren, a widower, made a point of being seen paying court to Mrs. Eaton, a gesture the President appreciated. Given the disorganized state of national political parties at the time, Jackson wielded unusual influence over the running-mate decision—and in his second term replaced Vice President John C. Calhoun with his friend Van Buren.

“The political history of the United States, for the last thirty years, dates from the moment when the soft hand of Mr. Van Buren touched Mrs. Eaton’s knocker,” James Parton wrote in his 1860 biography of Jackson.

During Jackson’s second term, he leaned heavily on Van Buren for advice on political and economic crises. For example, he wrote that he did not wish to make a decision about extending the charter of the Bank of the United States without knowing his Vice President’s “full views” on the subject. In turn, Jackson supported Van Buren’s successful 1836 run for the presidency, once describing him as “one of the most pleasant men to do business with I ever saw” and noting that in him the people “will find a true friend and safe depository of their rights and liberty.”

“Jackson had other close personal friends, but no other political associate whom he trusted so thoroughly and relied on so completely,” says Daniel Feller, director of The Papers of Andrew Jackson and a professor of history at the University of Tennessee. “Jackson didn’t make a move without consulting him.”

(Not every such friendship worked out so well, however: James Polk’s Vice President George Dallas cast the deciding vote to approve new, lower tariffs, in order to further Polk’s agenda, even though his home state was against the move. “That might have killed his career in Pennsylvania,” says John Holtzapple, director of the James K. Polk Home.)

As the power of the presidency increased after World War II, so did the sense that the Vice President had to be up to speed—but that still didn’t mean the two men had to get along. Hubert Humphrey, who was Vice President under Lyndon B. Johnson, famously described the “unrewarding burden of the vice presidency” to TIME in 1969, as like “being naked in the middle of a blizzard with no one to even offer you a match to keep you warm.”

Humphrey and Johnson had been friendly in the U.S. Senate, according to Robert A. Caro’s Master of the Senate: The Years of Lyndon Johnson III, but in the Executive Branch, LBJ was known for excluding Humphrey from meetings, sending him abroad on short notice and with chaperones, and keeping him sitting outside the Oval Office waiting.

“Johnson treated his beagle better than Humphrey,” says Paul Light, an expert on the presidency at NYU Wagner, who notes that Presidents have sometimes seen VPs as competition. “They’re looking at the person who could be sleeping in their bed,” as he puts it, which doesn’t exactly form a basis for cordial and enduring relationships. Some historians say Johnson may have treated Humphrey like that because he himself had felt useless during his own term as a Vice President. (The need to assert the President’s vitality can backfire in other ways too: Woodrow Wilson’s Vice President lost access to the President after Wilson suffered a stroke in 1919—a move that some historians argue doomed the League of Nations in the lead-up to World War II.)

But when Jimmy Carter was elected in 1976, he couldn’t afford to freeze out his Vice-President, Walter Mondale. Carter was a peanut farmer whose only experience in politics was in Georgia state office and one term as Governor, whereas Mondale had 12 years representing Minnesota in the U.S. Senate under his belt. “I needed a lot of help, I never had served in Washington before,” Carter said in a conversation with his partner-in-crime and Richard Moe, Mondale’s former Chief of Staff while he was vice president, at a tribute to Mondale’s life and legacy on Oct. 20, 2015. “He was almost like another president. That’s what I always wanted.”

So Carter is credited with “flipping” the vice-presidency from a “national insurance policy” to a position for someone who would try to help the President succeed by serving as a loyal adviser and troubleshooter. Carter moved the VP’s office into the West Wing, recognizing that proximity to the commander-in-chief means power, says Joel K. Goldstein, the preeminent scholar on the vice presidency and professor of law at Saint Louis University School of Law.

And whom did Carter and Mondale consult for advice on how to orchestrate that flip? None other than Hubert Humphrey.

Since the age of Carter, that crucial Executive Branch relationship has been seen as a source of great political and personal perks—though the potential has not always been realized the way it was during the Obama administration.

For example, Ronald Reagan did follow Carter’s precedent in treating his Vice President George H.W. Bush like a partner. But tension between the First Lady and the Second Lady meant that the private relationship between the two couples could only go so far, as Jon Meacham writes in Destiny and Power: The American Odyssey of George Herbert Walker Bush:

And, though Bill Clinton and Al Gore started out as buddies and got along famously during the 1992 campaign on their cross-country bus trip nicknamed “Bill and Al’s Excellent Adventure,” Gore later distanced himself from Clinton after the Monica Lewinsky scandal.

So what does that mean for the incoming President and Vice President?

So far, journalists following their relationship report that it seems as professional as the relationship between George W. Bush and Dick Cheney was, with Trump trusting Mike Pence, who has more political experience, to run certain things. For example, he turned over management of his transition effort to Pence. But their temperaments are night and day—and whether their professional attitudes blossom into friendship remains to be seen. 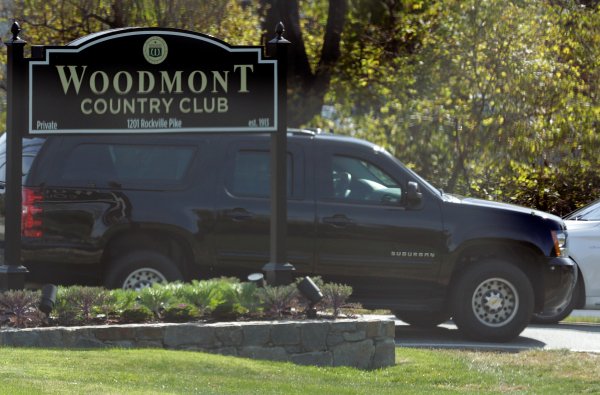 Country Club Member Who Left After Obama/Israel Controversy Says He'd Do Same Over Pence or Ivanka Trump
Next Up: Editor's Pick