Iran Unites, Briefly, to Mourn a Founding Father of the Republic

Iranians gather around a hearse carrying the coffin of former President Akbar Hashemi Rafsanjani during his funeral ceremony in Tehran on Jan. 10, 2017. The heavyweight politician will be buried inside the crypt of Ayatollah Ruhollah Khomeini, the leader of Iran's 1979 Islamic revolution, at Khomeini's mausoleum.
Atta Kenare—AFP/Getty Images
By Kay Armin Serjoie / Tehran

In the biggest state funeral held in the Islamic Republic in the past quarter of a century, Ayatollah Akbar Hashemi Rafsanjani, one of the last remaining founding fathers of the republic, was laid to rest on Tuesday.

Rafsanjani, a former President who held a unique place in Iran’s political firmament, was buried beside his mentor Ayatollah Khomeini in the sprawling cemetery in downtown Tehran where many of his comrades of the 1979 Islamic revolution are buried.

In a funeral procession symbolic of Rafsanjani’s amazingly complex and inconsistent public persona, the one-time hardline revolutionary turned pragmatic moderate was mourned by thousands upon thousands of Iranians of all walks of life. From devoted revolutionaries to dissidents, from the staunchly pious to those who barely observed the Islamic hijab, from the lower to the affluent middle classes, everyone saw something they respected or cherished in Rafsanjani’s six decades in politics.

“For years he has been alongside the people, the Islamic Republic, the whole nation is indebted to him,” said Amir Alizadeh, a 55-year-old former state employee who had attended with his wife.

“I’ve come to pay respect to all the work he did for the Islamic Republic, all the struggles and hardship he endured for the revolution,” said 32-year-old Ehsan Mohammadi, who considered himself a devout supporter of the establishment.

Others favored Rafsanjani’s more recent stances and actions, “From the 2009 unrests onwards Rafsanjani worked in the interests of the people, he strived for them,” said Afsaneh, a 59-year-old pensioner who had attended with her daughter and who declined to give her full name. “I’ve come to the funeral to show that I will continue his path.”

Rafsanjani had always been an unpredictable figure, changing his views and stances with time. In the first years of the revolution he had actively participated in the quashing of all opposition, yet in 2009 he came out in support of dissidents. While parliamentary speaker in the ’80s he helped to set up a socialist economy but in the decade that followed he led, as president, a massive liberalization of the economy. As commander of Iranian forces in the war with Iraq he had decried the lack of dedication to total war by others, but later said “the world of tomorrow is that of dialogue not missiles.”

This had led his opponents to call him opportunistic, and his supporters pragmatic — but what they all agreed upon was his uncanny ability to appeal to large segments of the populace at all times, even though those segments changed drastically throughout the years.

This appeal allowed many Iranians to keep faith in the establishment, in spite of hardships and differences of opinion. “He had a tranquilizing effect, he kept hope alive,” said Saleh Mahlooji, a student and reformist activist who had attended the funeral. “Somehow he managed to unite people behind the system.”

With his sudden death on Sunday Iranians of all persuasions were left wondering who, if anyone could play this role after him. “With his death the split between different groups of people and the state could widen,” Mahlooji said.

That split was vividly apparent today, as just yards away from each other groups of loyalists and dissidents were shouting slogans in support of their cause. At one point, when forced together by the pressure of the crowd, their voices joined into one chorus, from bearded hardliners to hip young women wearing as little hijab as they could get away with. Together, they shouted: “Your path will continue Hashemi!”

No matter what path they each meant, Rafsanjani had in death, for a day at least, united Iranians one last time. 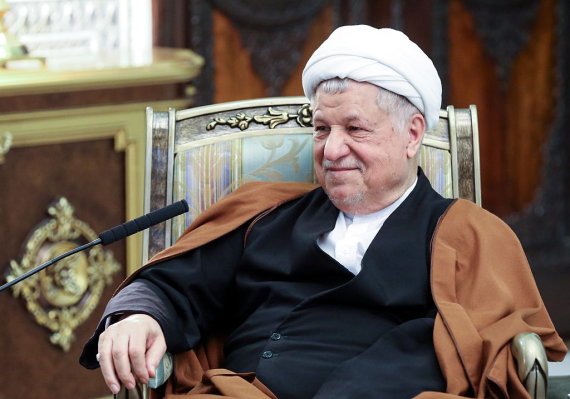 Iran Ex-President's Death Could Embolden Hard-Liners
Next Up: Editor's Pick