As Norway Decides There's No Future for FM Radio, Here's What to Know About Its Past

Starting on Wednesday—at precisely 11:11:11 a.m. on Jan. 11—Norway began shutting down its FM radio network and replacing it with digital radio, a process that will be complete by the end of the year. Digital radio promises better sound quality, more radio channels and reduced costs. Still, many aren’t psyched about the switch. They say 2 million cars in Norway don’t have digital receivers, and converters aren’t cheap, reported Reuters.

FM radio, short for Frequency Modulation, was invented by Edwin Armstrong more than 80 years ago, and the story of its introduction can still shed light on the next step for the radio industry.

“FM was unique in radio history, because it’s as close as you’re ever going to get to one guy coming up with a whole system,” says Scott Woolley, author of The Network: The Battle for the Airwaves and the Birth of the Communications Age. Born in New York City in 1890, he’d become interested in inventing and radios at 14, reading about Guglielmo Marconi’s transatlantic wireless messages. Armstrong attended Columbia University and began improving on radio technology with new inventions while he was still a student. His inventiveness continued during WWI as he served as a major in the Army’s Signal Corps labs, and while there he invented the superheterodyne circuit, which again revolutionized radio. And that was a big deal: Despite the Depression, between 1930 and 1935, the number of radio receivers in U.S. households almost doubled, from 12 million to 22 million.

So, returning to Columbia to teach after the war, Armstrong turned to the next problem for radio: static.

In December of 1933, Armstrong was awarded a series of four patents related to modulating the frequency of a transmitted wave over a wide band of frequencies for radio signaling, broadcasting and receiving. At the time all radio was AM, which stands for “amplitude modulation.” AM works by varying the amplitude (the height or power) of a radio wave, whereas FM would vary its frequency (the time between the peaks of the wave). The wide band of frequencies used to transmit the signal meant that static couldn’t break in to distort it.

It wasn’t a particularly complex idea to try varying frequency, says Woolley, but Armstrong was the first person to made it work. (Though, as Gary Frost argued in his book Early FM Radio, FM wasn’t entirely the work of a genius solo inventor. Many others helped lay the groundwork for Armstrong’s success.)

When Armstrong first started testing, people were blown away at the sound quality. Although his earlier inventions had already transformed radio, “His FM system has all the earmarks of another, and more sweeping revolution. Neither sunspots, lightning, electric razors, icebox motors, telephone dials, switches, bed warmers nor passing street cars can ruffle its calm,” crowed TIME in 1940, noting the many sorts of activities that could interfere with AM radios.

Armstrong built the first full-scale FM station in 1939, transmitting to experimental receivers from “a 400-ft. tower on the Hudson River Palisades at Alpine, N.J.”

“A starry-eyed few thousand owners of the latest fangled radio sets in areas around New York City, Boston, Washington, Columbus (Ohio), Chicago and Milwaukee, nowadays enjoy radio entertainment that is static-free, interference-free, does not wobble, fade or burst at the seams,” TIME wrote in early 1940. “The enthusiasts say that they hear music faithful to the topmost tweet, the bottommost woof; that speech seems to come from the next chair, instead of the next telephone booth; that if an announcer should scratch a match, listeners would hear it burst into flame; that between numbers there is no hum, no crackle, just black, velvety nothing. Said one marveling first listener: ‘Why, this thing can broadcast silence!'”

TIME quipped in August of 1940 that the radio industry was “worried that revolution was just around the corner,” and when World War II arrived, Armstrong allowed the U.S. Army to use FM technology for its radios and walkie-talkies. The new innovation proved its advantages—it was more difficult to jam, and static and interference were drastically reduced. It was clearly the superior technology in terms of clarity, but still it took years for FM to become widespread.

“It is kept from the civilian population because it is too great a threat to AM,” explains Woolley, and private AM broadcasters were defensive since they saw themselves going out of business.

In 1945, the FCC applied new restrictions to the technology, supposedly to protect its future. First the FCC changed the frequency band FM operated on (for fear of sunspots causing interference), then limited the range of FM broadcasts (to prevent monopolies). TIME described the effects of the sunspot move in a March 1945 piece: “the move to a higher band might delay FM’s postwar development, might make the present 500,000 FM sets useless, boost the price of new receiving sets, necessitate equipment changes.” It did indeed; the band change meant existing FM radios would no longer operate, and FM broadcasters would be limited to smaller areas of distribution, towns and communities. But finally, in mid-1945, “radio’s mysterious baby,” per TIME’s pages, was “out of its swaddling clothes.”

FM radio didn’t surpass AM in terms of listenership in the U.S. until the late 1970s, close to a half century after Armstrong patented it. Eventually, FM and AM stations would find themselves side-by-side on a standard radio, which could receive both. The new and better technology couldn’t be halted, but the old technology could continue to exist alongside it.

And so, Woolley says, the coming of digital radio brings up the exact same question that arose when FM arrived: “When should the government force technological change and when should it let archaic technologies persist?” 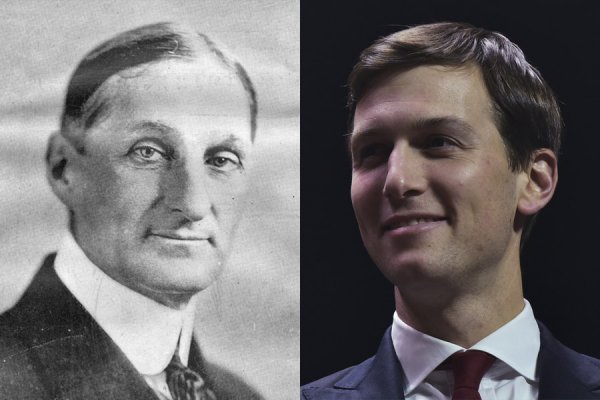 Jared Kushner Wouldn't Be the First Powerful Son-in-Law in Presidential History
Next Up: Editor's Pick