Tired of Waiting for the Internet Repairman? Just Be Glad You're Not in the Marshall Islands

An Internet blackout in the normally well-connected Marshall Islands has been extended indefinitely as maintenance workers attempt to repair an underwater fiber optic cable that services the Pacific archipelago.

The small island country has been mostly offline for more than 10 days now, and users have reportedly suffered “Internet withdrawals” since the government forced them to quit social media “cold turkey” to save what little bandwidth has been left available during the maintenance.

According to the Australian Broadcasting Corp. (ABC), phone and Internet communications have relied on satellite networks since the repairs began in late December. The satellites can only provide about 3% of the bandwidth usually supplied by the cable, which offers a high-speed connection that mostly carries U.S. military communiqués.

Work on the cable was originally supposed to wrap up by Jan. 8, ABC reports, but engineers have encountered setbacks.

“I’ve been told that locating the repair site is like finding a pin head in a 3-mile stretch of cable,” National Telecommunications Authority chief Tommy Kijiner Jr. said on Radio Australia, according to ABC. He added that, while there may be some frustration over the digital hiatus, “most people have been really cooperative.”

Marshall Islands President Hilda Heine reportedly told the country’s parliament during her state of the nation address last week that many Marshallese, as locals are called, were exhibiting symptoms of withdrawal.

“I guess it is human nature that people just want to check up on what’s going on with their Facebook sites but it’s been tough — people just cannot do without the speed and reliability the fiber-optic cable affords them,” telecoms chief Kijiner said. “It changes everything.” 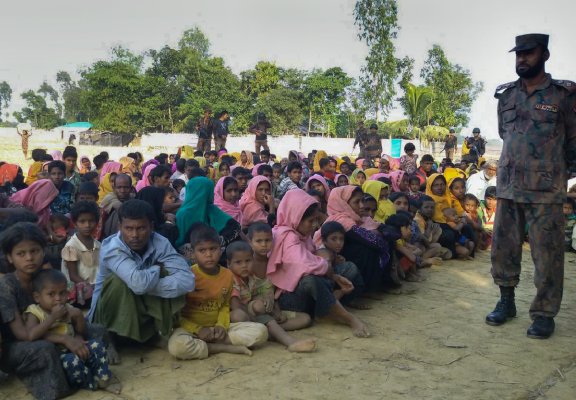 22,000 Rohingya Have Fled Burma in the Past Week
Next Up: Editor's Pick