Around 22,000 Rohingya Have Fled Military Violence in Burma in the Past Week

Rohingya Muslims from Burma, who tried to cross the Naf river into Bangladesh, are kept under watch by security officials in Teknaf, in Bangladesh, on Dec. 25, 2016.
STR/AFP/Getty Images
By Feliz Solomon

About 22,000 Rohingya Muslims have crossed the border into Bangladesh after fleeing unrest in Burma in the past seven days, bringing the total number of new arrivals to more than 65,000 since the Burmese army launched operations against the heavily persecuted minority in early October.

The U.N. Office for the Coordination of Humanitarian Affairs said Monday that the displaced are being sheltered in registered refugee camps, makeshift settlements and a few host communities in the Bangladeshi city of Cox’s Bazaar, near the border with Burma’s Arakan state.

People began pouring over the border after the Burmese army launched what it calls “clearance operations” in response to an Oct. 9 attack on border police positions believed to have been carried out by Rohingya militants. The attack killed nine officers, prompting a sweeping search for suspects in Muslim villages.

Several waves of Rohingya civilians have since fled, many arriving in Bangladesh with harrowing stories alleging that the Burmese army has committed grave human-rights abuses, such as gang rape, arson and extrajudicial killing, in the operation zone. The area has been closed off to journalists and almost all humanitarian workers, leaving some 130,000 aid-reliant people without assistance.

Last week, the Burmese government vowed to take action against four officers after a video was shared online appearing to show Burmese soldiers kicking and beating young men who were rounded up for questioning. However, the government has denied most allegations of abuse and says that security forces are acting within the law.

The Rohingya, a mostly stateless Muslim group numbering about 1.1 million, are the majority in northern Arakan state, also known as Rakhine, though they are the minority in Burma, which is officially known as Myanmar. The predominantly Buddhist country has seen an alarming rise in anti-Muslim attitudes since communal riots in 2012 swept through Arakan, causing more than 100 deaths and displacing over 100,000 people.

The U.N. human-rights envoy for Burma, Yanghee Lee, is currently visiting the country to assess the situation. She has previously said she had received credible reports that abuses were being committed in northern Arakan since the military operation began, and that conditions could be nearing “what we would all agree are crimes against humanity.”

Lee said in mid-December: “I am getting reports from inside the country and from neighboring places too that things are not as they are being portrayed by the government. We are seeing a lot of very graphic and very disturbing photos and video clips.”

Lee is expected to visit northern Arakan state as well as parts of Kachin state, where conflict between ethnic rebels and the Burmese army has recently forced some 2,700 internally displaced civilians to flee refugee camps. 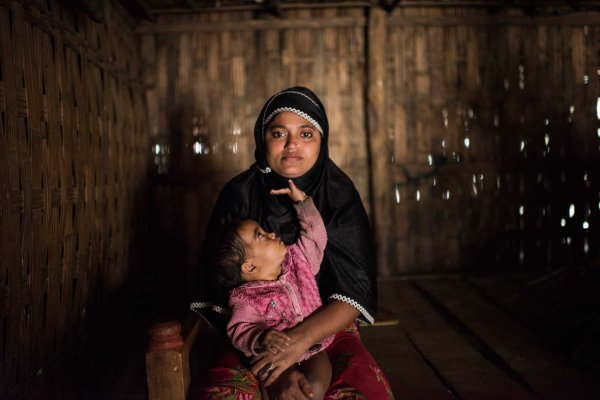 Witnessing the Rohingya's Invisible Genocide
Next Up: Editor's Pick