50 Years Ago This Week: The Problem With Building a 'Great Society'

A cover story about John William Gardner, secretary of Health, Education and Welfare (HEW), exposed a problem with government good intentions: without logistical support for new ideas, money and legislative will can only go so far. And any delay or mishaps getting off the ground can reflect so badly on a program that the money and will disappear by the time the logistics are ironed out.

Under President Johnson’s Great Society initiative, the U.S. government had passed an overwhelming number of bills and put a huge amount of money toward those efforts. But each new effort required staffing, training, organization and other behind the scenes work. For example, Johnson acknowledged that the roll-out of Medicare was “just about the largest single management effort since the Normandy invasion.”

Duplicating that effort many times over was now Gardner’s job: the size and budget of HEW had grown substantially, but their tasks were huge too, covering everything from cutting down on pollution to enforcing school integration. Failure could imperil the whole Great Society project, and Gardner’s job was a notoriously tricky one—and yet he faced it with optimism, at least in the view of TIME’s report. But, while programs like Medicare did become integral parts of American society, HEW did have too much on its plate: about a decade later, it was split into two separate agencies.

Follow-up: After last week’s cover story about the Cultural Revolution, TIME took a deep dive into the mechanisms of the so-called big-character posters that were being used in China’s “war of words.”

Developing story: New York City Congressman Adam Clayton Powell Jr. had spent many years pushing Washington buttons for good and ill alike: he flouted discriminatory norms, but he flouted other norms and laws, too. TIME would later sum up his main problems as “flagrant nepotism and cronyism” and a charge of income-tax evasion, but he also could not even return to New York City except on Sundays—when legal papers were not served—for fear that he would be sent to jail for contempt of court for his failure to pay a defamation judgment. Now, to his own seeming surprise, he had been officially barred from taking his seat in Congress. “In the aftermath, Negroes from Julian Bond to Stokely Carmichael denounced the House’s action,” TIME reported. “Even notably moderate, responsible Negro leaders such as Martin Luther King were angered, contending that Powell is not the only Congressman deserving of censure—and indeed nobody expected a stampede by Congress to adopt a long-needed, enforceable code of conduct for all.” A campaign to get Powell back to Congress was underway.

Times a-changin’: In an essay on the morality of war, the magazine—which had previously advocated for the War in Vietnam as “the right war”—acknowledged that national attitudes were shifting on the question of whether the war was just. “A great many Americans are turning into unhappy moralists about the war in Viet Nam. It is a new sensation. Americans are accustomed to feeling right about the fights they get into,” the piece noted.

Choice period detail: A fashion story covered the latest innovation in mod ensembles: “pliable plastic lamps sewn into the clothes in segments and connected to a rechargeable battery pack worn on the hip, just like Batman.” The results were minidresses ornamented with “throbbing hearts and pulsating belly stars” that designer Diana Dew called “hyperdelic transsensory experiences.”

Regrettable vintage advertisement: Though the ad did not appear in the magazine’s pages—it was a television campaign—TIME reported on a new effort by Ozon Hair Spray to appeal to male customers by recruiting extra-manly spokespeople like baseball players. The ad’s narration, the story explained, informed consumers that each of the stars in the spot was “one of those sissies who uses his wife’s hair spray.”

Coming up next week: A cover story on air pollution 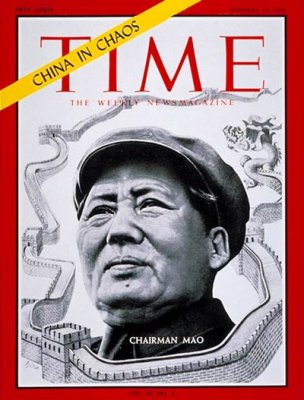 50 Years Ago This Week: China in Turmoil
Next Up: Editor's Pick