Dove is celebrating a big birthday by encouraging women to define beauty for themselves.

To celebrate the 60th anniversary of its classic Beauty Bar, the brand is rolling out a campaign called #RaisetheBeautyBar, which asks women to pledge to redefine beauty for themselves and young girls to challenge preconceived notions about attractiveness. “It’s more than just a hashtag, it’s a call to action,” Kathy O’Brien, the vice president of skin and marketing services for Unilever who oversees Dove’s campaigns, told Motto in a phone interview. “We want to create a community where beauty is a source of confidence, not anxiety.”

The campaign will include social media participation, which the brand hopes will lead to real change in how society views beauty, and a limited edition Beauty Bar that will be available at drug stores in January and February. The brand rolled out a video reflecting on how it’s celebrated the diversity of women’s bodies over the past 60 years.

The most notable instance? Its Real Beauty Campaign, launched in 2004. The campaign photographed real women of all shapes and sizes in lieu of models and proudly displayed them on billboards. “What we were beginning to realize is that women have a different view of beauty than what was being portrayed,” O’Brien, who was involved with the conception of the Real Beauty campaign, said. “We thought that we have a responsibility to do something about that.”

Stacy Nadeau, who was featured in the 2004 campaign after she was plucked off the street by a casting director, told Motto in a phone interview that participating in the campaign changed her life. “It was one of the first times I was in a group of women that just celebrated themselves and celebrated who they were,” Nadeau, who works as an inspirational speaker and frequently partners with Dove, said of the experience. “It encouraged me to be my best self.”

The reaction to the initial campaign was mostly positive, and the brand continued to roll out ads with an empowerment tilt, including a 2013 spot that went viral ads of all time (and garnered its fair share of criticism for showing mostly white women.) Still, many advertising experts say that Dove paved the way for other female-focused brands to depict women as they actually appear instead of airbrushed. “I think Dove pioneered that conversation. They were among the first to use attainable images of beauty in advertising. So many different brands and companies have followed suit,” Nadeau said. “Dove was the brand that decided to walk the walk. They said, ‘We have some influence, let’s make sure we’re using it to send a positive message.’”

Beyond its advertising, Dove launched a self-esteem project in 2004, which provides a slew of resources to teach young people about body positivity, confidence and self-esteem. They call this their most “rewarding legacy,” and while they’ve reached 20 million young people globally with this initiative, they aim to reach an additional 20 million individuals by 2020. “We’ve done so much work,” Nadeau said. “But we still have a great way to go.” 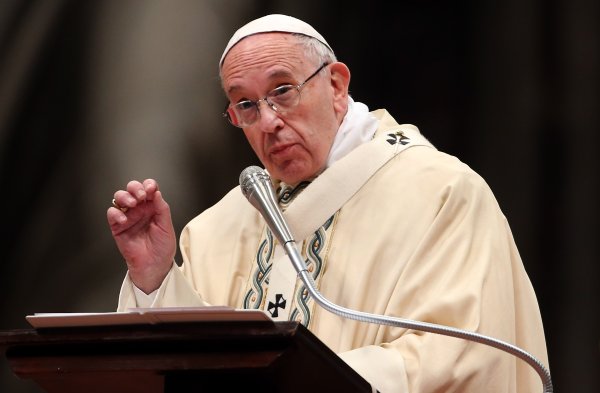 The Pope Wants You to Breastfeed in Church
Next Up: Editor's Pick