Iran Just Lost Its Most Influential Power Broker. Now, Everything Could Change.

The death on Sunday of one of Iran’s last first-generation revolutionaries, who ranked among its most influential statesmen, is set to have a seismic and unpredictable impact on the internal dynamics of the country.

Former President Akbar Hashemi Rafsanjani was one of the first and most famous members of the inner circle of the late Ayatollah Khomeini, who toppled Shah Mohammad Reza Pahlavi in the Islamic Revolution of 1979. Over the past four decades, he had come to be known as an emblem of the founding fathers of the Islamic Republic.

His personal and deep friendship of 59 years with Ayatollah Seyyed Ali Khamenei, the Supreme Leader of the Islamic Republic, was exceptional, as demonstrated by the emotional condolences issued by the leader. From Parliament Speaker to commander of the Iran-Iraq war to President from 1989 to 1997, Rafsanjani had always been intimately involved in the policymakings and running of the Republic throughout its most perilous days.

But what makes his death a potential game-changer was Rafsanjani’s role as the highest-ranking supporter of the reformist movement and moderate politicians within the Islamic Republic establishment. Once considered a scourge of anyone lacking in revolutionary zeal, Rafsanjani had in his later years, at great cost to his standing among stalwart revolutionaries, gradually reinvented himself as a champion of freedom and democracy.

With his legendary status within the annals of the Islamic Republic, he was able to assist reformists and moderates alike, especially throughout the tumultuous years of the Ahmadinejad presidency and the 2009 unrests, when many former officials and political factions within the Islamic Republic, who had opposed the conservatives and disputed Ahamadinejad’s re-election, were either sidelined or jailed.

Rafsanjani’s status as a high-ranking official simultaneously accepted by the establishment while respected by the reformist movement put him in a unique position to play power broker inside the opaque structure of the Islamic Republic. When the conservative Guardians Council, which vets candidates for presidential elections in Iran, disqualified him from running in the 2013 elections to choose Mahmoud Ahmadinejad’s successor, Rafsanjani forged an alliance among moderates and reformists in support of the lesser-known moderate Hassan Rouhani, who secured victory over conservative and hard-line candidates.

Two years later, when the majority of well-known reformist candidates had been disqualified from running in the parliamentary elections, Rafsanjani once again used his standing among reformists to convince them to support moderate candidates. That led to an ousting of conservatives and hard-liners from the parliament after 12 years of near total dominance over the legislative branch.

Rafsanjani, who had been resoundingly beaten by Ahmadinejad’s anti-Rafsanjani platform in the 2005 presidential elections, had within a decade transformed himself into the main arbitrator between the establishment and the disgruntled voters who had once despised him, thus earning himself the nickname “a man for all seasons.”

A vast coalition of political parties and economic interests threw their lot in with him. From moderates and technocrats to reformists and liberals, anyone outside of the conservative camp would heed his call and attend to his instructions, making him the most influential persona in elections and in swaying the public vote. After more than 60 years of first-hand involvement in Khomeini’s movement, in many of which he held the highest ranks within the Islamic Republic, Rafsanjani had become an indispensable figure across the political spectrum.

This had come at a great cost for him personally. Despite being a founder of the Islamic Republic, he was not allowed to run in elections or perform Friday prayer sermons. Two of his children were imprisoned on corruption and security-related charges, and he was constantly under scathing attack from hard-liners. It was the cost he accepted as nexus of a host of political groups and factions, all former insiders who had been pushed out by conservatives and hard-liners, and the establishment.

That was what made the sudden news of his death all the more shocking for the whole of the Iranian political strata; with Rafsanjani gone, no one knows how the internal politics of the Islamic Republic will now play out. The reformists and moderates will no longer have his behind-the-scene dealings and manipulations to ensure that conservatives and hard-liners will tolerate them. The establishment will have lost one of its strongest links to ensure that the reformists, with their huge public support, will toe the high officials’ line when it comes to policies of strategic significance.

Even though major figures and politicians immediately stressed the need for unity and reconciliation, the feeling of dread of what the future might hold was apparent among the public and officials alike — especially on social media. Hours after the news broke, one of President Rouhani’s senior advisers tweeted: “Tonight some will sleep calmly, but they are unaware of what tomorrow and the day after tomorrow holds!” A short time later, after being accused of sowing sedition by hard-liners, he deleted the tweet.

The demise of Ayatollah Ali Hashemi Rafsanjani comes at a crucial time for the Republic. The election of Donald Trump as U.S. President looms large over the fate of the historic nuclear deal of 2015, which the hard-liners are calling a failure and promising to take down as soon as they get the chance. The reformists are disgruntled with their share in the circles of power. The general populace is unhappy with the less-than-tangible effects of the lifting of sanctions on their livelihoods. With the next presidential election just months away, the death of a symbol of the revolution could yet spark a new cycle of change. 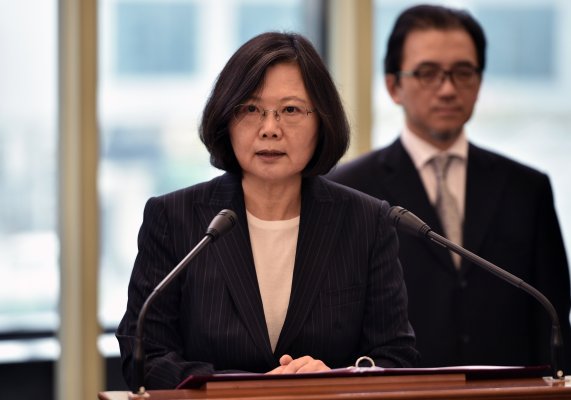 China Warns U.S. Officials Not to Talk to Taiwan's President
Next Up: Editor's Pick