Blackfish director Gabriela Cowperthwaite on Friday mourned the loss of SeaWorld’s Tilikum, a killer whale who she said died a “martyr.”

Cowperthwaite, whose 2013 documentary chronicled the whale’s life as well as the animal’s brutal killing of a SeaWorld trainer, said she sadly felt instant “relief” upon hearing about Tilikum’s death. She said the killer whale, believed to be about 36 years old, was better off dead than suffering in pain in captivity.

“Tilikum lived a horrible life. He lived an incredibly tragic life in captivity from the moment he was plucked from the ocean,” she told TIME. “He experienced horrific pain. He caused unspeakable pain. At least now there’s no more suffering from him.”

Tilikum died Friday in SeaWorld’s Orlando park after battling a bacterial lung infection for at least 10 months, the marine park said. The orca in 2010 became known around the world after he dragged SeaWorld trainer Dawn Brancheau into the pool and violently thrashed her around until she died.

The tragedy inspired Cowperthwaite, 45, to begin studying Tilikum and killer whales in captivity—a decision that changed the director’s entire viewpoint. “When I started off the documentary, I was scared of him. I was initially terrified of him because I had come into this because of a death of a trainer,” the Los Angeles director said Friday. “But then seeing him in person was just profoundly sad. You come to think of him as yet another victim.”

The documentary was critical of SeaWorld for keeping killer whales in captivity, arguing that the highly intelligent animals become violent and aggressive toward humans when kept away from their natural habitat. It struck a cord with the public and caused a drop in attendance at SeaWorld parks.

SeaWorld last March announced that it would end orca-breeding and killer-whale shows, a historic move partly inspired by a shift in “society’s attitudes,” the company’s president, Joel Manby, said at the time.

Cowperthwaite said she hopes Tilikum’s life and death will sway the marine park to finally release all of its animals into the wild or into coastal sanctuaries. “His purpose in some way was hopefully to turn his tragic life into a lesson,” she said. “He can truly be an ambassador for what’s wrong with having animals in captivity.”

SeaWorld said Tilikum “lived a long and enriching life while at SeaWorld” and died surrounded by trainers and veterinarians who provided him “around-the-clock world-class care.” They said the bacteria in the whale’s lungs can be found in water and soil in both wild habitats and captivity.

“Tilikum had, and will continue to have, a special place in the hearts of the SeaWorld family, as well as the millions of people all over the world that he inspired,” Manby said in a statement Friday. “My heart goes out to our team who cared for him like family.”

Cowperthwaite said Tilikum’s story helped raise awareness of the plight of killer whales but that his death would be pointless if other animals aren’t subsequently freed.

“If nothing happens, then Tilikum’s death and all these deaths will be in vain,” she said. 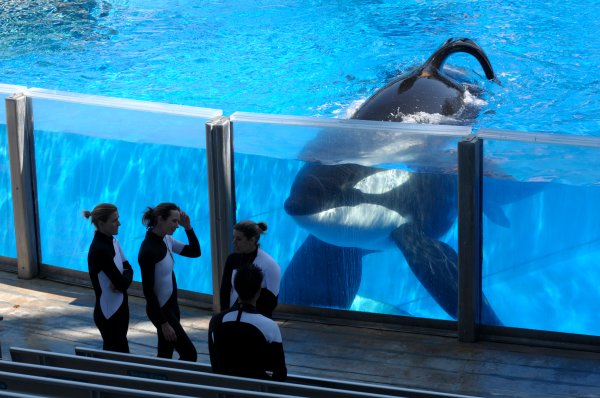