Sunday night’s Golden Globes ceremony was the first major televised event since the presidential election. And considering Hollywood’s overwhelming rejection of Donald Trump (look no further than the President-elect’s difficulty finding anyone to perform at his inauguration), one might have expected a thread of political commentary to be woven throughout the thank yous to “my team,” “the love of my life” and “my fellow nominees.”

But rebukes of the incoming Administration were intermittent at best, generally taking the form of jokes or indirect appeals to empathy and diversity. The rarity of Trump-talk may also have stemmed, in part, from the fact that seven of the night’s awards went to La La Land, a movie with much to say about love and dreams and disappointment but little, thematically, that lends itself to political entreaties.

Here are all of the celebrities who used their platforms to call out the President-elect, implicitly or explicitly, on Sunday night:

Jimmy Fallon
In his opening monologue, the host made a few jabs at the incoming President. In the first, he compared Trump to Game of Thrones‘ sinister King Joffrey, joking that in 12 days we will find out what life would have been like had Joffrey survived on the violent series. He then poked fun at Trump’s repeated rejections from musicians invited to perform at his inauguration, saying that Meryl Streep’s character in Florence Foster Jenkins was “the world’s worst opera singer, and even she turned down” his offer.

Hugh Laurie
While accepting the Golden Globe for Best Supporting Actor for the TV series The Night Manager, the British actor referred indirectly to American politics, half-joking that his award arrived on what must be “the last ever Golden Globes,” considering that “it has the words Hollywood, foreign and press in the title … To some Republicans even the word association is slightly sketchy.”

Zootopia director Byron Howard
In another political statement that refused to name names, Zootopia co-director Byron Howard said that his film, which won the Globe for Best Animated Feature, aimed to send a message “to adults about embracing diversity, even though there are people in the world who want to divide us using fear.”

Meryl Streep
The recipient of the Cecil B. DeMille award was the only person Sunday night to speak both seriously and directly about Trump on stage, though she did not call him out by name. Streep, who spoke on behalf of Hillary Clinton at the Democratic National Convention last summer, criticized Trump for mocking a disabled reporter and sending a message that humiliating others is acceptable. “When the powerful use their position to bully others,” she said, “we all lose.”

Bonus: Viola Davis, backstage
Davis did not get political during her acceptance speech for Best Supporting Actress, which focused primarily on the power of August Wilson’s playwriting, but she did not hold back when asked about the incoming President backstage. Rather than comment directly on Trump, however, Davis raised questions about what it means that Americans elected him in the first place. “There is no way that we can have anyone in office than is not an extension of our own belief system,” she said. “So then what does that say about us? If you answer that question, I think that says it all.” 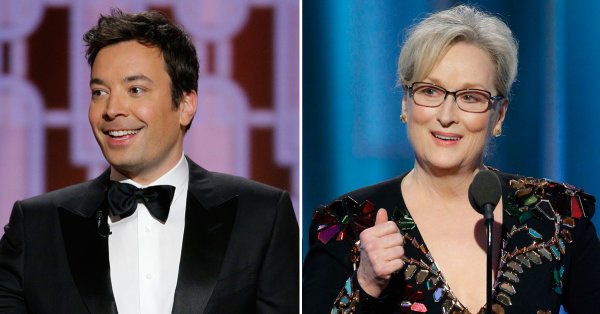 The Golden Globes Send a Muddled Message Post-Trump
Next Up: Editor's Pick