(TOKYO) — Japan said on Friday it was recalling its ambassador to South Korea over a statue commemorating Korean women forced to work in Japanese military brothels during World War Two and that the statue violated an agreement to resolve the issue.

The two nations agreed in 2015 that the issue of “comfort women”, which has long plagued ties between the two Asian neighbors, would be “finally and irreversibly resolved” if all conditions of the accord — which included a Japanese apology and a fund to help the victims — were met.

The statue, which depicts a young, barefoot woman sitting in a chair, was erected near the Japanese consulate in the southern South Korean city of Busan at the end of last year.

Japanese Prime Minister Shinzo Abe told U.S. Vice President Joseph Biden in a phone call that it was important for Japan and South Korea to carry out the agreement, and not constructive to go back on it.

Chief cabinet secretary Yoshihide Suga told a news conference that the statue was “extremely regrettable” and that Japan was temporarily recalling its ambassador.

He also said Japan would also postpone bilateral “high-level” economic dialogue and that Japan was suspending talks on a new currency swap arrangement with South Korea.

The term “comfort women” is a euphemism for girls and women, from South Korea, China, the Philippines and elsewhere, forced to work in wartime Japanese military brothels. South Korean activists estimate that there may have been as many as 200,000 Korean victims.

South Korea’s Finance Ministry on Friday expressed regret that talks on the currency swap agreement had been suspended due to political reasons. 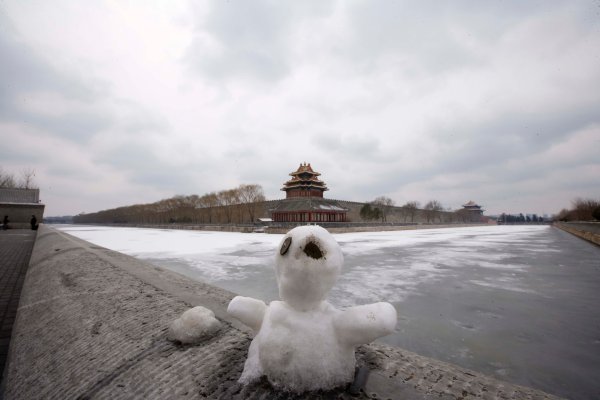 Frosty the Snowman Is a Health Hazard in China
Next Up: Editor's Pick