Squaring off in two rows, the new recruits at China’s elite Genghis bodyguard school pound each other’s bare chests, faces grimacing in obvious pain. The school’s founder, Chen Yongqing, strolls smiling down their ranks. After a few minutes, he blows his whistle and checks for red, bloody welts. Those whose skin has sufficiently ruptured are excused the next round of punishment; those with insufficiently crimson blemishes must go again.

“A lot of people come here scared of blood and pain,” Chen, 33, tells TIME. “But bodyguards must be ready for that every day.”

Training bodyguards has been big business in China for years. The country has the world’s highest number of billionaires and all the elite trappings that go with them — including a need for private-security personnel. Chen, a former Special Forces soldier specializing in counterterrorism, started his school in 2008 to cash in on that demand. “Before, people just thought bodyguards were thugs or gangsters,” says Chen, clad in fleece top and Ed Hardy jeans. “But we wanted to show that it can be a legitimate profession.”

And a lucrative one. Professional bodyguards employed by Chen’s sister security firm earn around $3,000 a month — four times China’s average wage. More than 2,000 students have so far passed through the schools gates. Those boasting martial arts or military experience pay the equivalent of $2,500 for a four-week course; recruits starting from scratch part with more for longer stints. The grueling regime involves combat training, conflict avoidance and even business etiquette — how to pour tea in an affluent client’s home, say, or dress the part for a swanky Shanghai restaurant.

But the focus remains on security. Pacing around a guest room at a nearby luxury hotel, Chen embarks on an elaborate game of hide and seek. He tears a small slit in the freebie toothpaste, stuffs a knife into a pillowcase and conceals other contraband around the room. Small teams of recruits are then summoned to sweep for anything untoward. “The biggest challenge is to learn the details of the job,” says Zhao Haifei, 24, a professional boxer from Kunming, Yunnan province. “How to check a hotel room, make sure a car is secure, keep the boss safe if some threat arrives. You can’t learn these details from books.”

For many recruits, the technical aspect is all they’ll ever pursue. Only half of graduates intend to pursue a career as bodyguards, with the rest simply wanting to toughen up, learn some new skills, and temper their mettle to better prepare for whatever challenges life hurls. “Some of the girls just want the opportunity get close to rich people,” grins Chen.

And yet, an easy life is getting harder to come by in China. The double-digit growth of the past decade has slowed, as the nation moves away from export-led development and tries to figure out what comes next. With the economy slackening, and ordinary people struggling, ostentatious displays of wealth have become politically reckless. President Xi Jinping has unleashed an antigraft drive that, the Chinese Communist Party claims, has snared a million offenders. In this climate, a phalanx of black-suited bodyguards can attract more problems than they repel. “Clients are declining partly due to the anticorruption drive and partly due to the economy, as people aren’t earning as much money,” says Chen.

Female and male trainees during a bodyguard-training program at the boot camp of Genghis Security Academy in Beijing on Aug. 21, 2013
Liu Changlong—Imaginechina

Few plans have been made for the surplus troops, though, and hundreds of uniformed soldiers brought central Beijing to a standstill last month to highlight the lack of opportunities, waving placards and chanting protest songs. “Our rights and benefits to be transferred from military posts to suitable civilian work have been violated,” read one banner, according to Reuters.

Du Xinghai, 26, from Heilongjiang province, signed up to Genghis after eight years in the military. “When I went back home, I could only find menial work,” he says. “After going to this school maybe I will start my own business in my home town.”

Hundreds of thousands of Chinese will be looking for the same over the next few years, as the much-vaunted security of government jobs — the so-called iron rice bowl — is scaled back. Other than the military, an estimated 5 million to 6 million state workers are also expected to be laid off to curb overcapacity. That isn’t going to help the job market — least of all the market for private security. Ultimately, shrugs Chen, “the bodyguard industry reflects the political and economic situation in China.”

— With reporting and video by Zhang Chi / Beijing 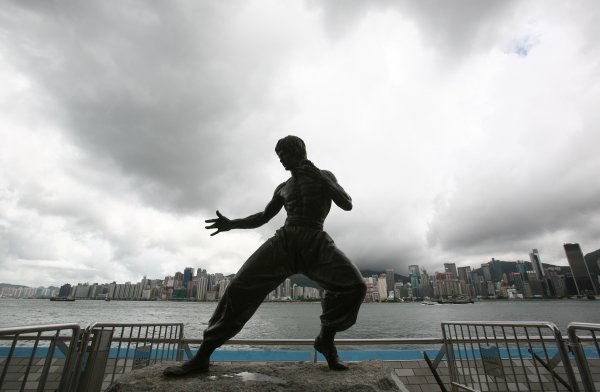