When President Barack Obama delivers his farewell address in Chicago on Tuesday, he will be only the 10th president in American history to present a formal goodbye as such, according to Gleaves Whitney, the author of American Presidents: Farewell Addresses to the Nation, 1796-2001. Though the practice has become much more common through the years, the vast majority of presidents have said their goodbyes during their final Annual Messages to Congress or State of the Union addresses.

By Whitney’s count, the other presidents to deliver a separate farewell have been George Washington, Andrew Jackson, Andrew Johnson, Harry Truman, Dwight Eisenhower, Jimmy Carter, Ronald Reagan, Bill Clinton and George W. Bush. (Many historians also count George H.W. Bush’s West Point speech as a farewell address, but Bush himself did not identify it as such.)

For those presidents who have chosen to announce the ends of their careers in public service through a separate speech, a typical farewell address—which could take the form of a lengthy editorial in early years and more recently has been delivered to an audience—has involved not only thanking staff and supporters, but also reiterating an administration’s ideas about America’s national purpose. As a result, these speeches can also be a window into the unique challenges the country faced during a president’s term.

Here are some of the most memorable ones:

George Washington (1796): The first farewell address remains one of the most influential statements in American political history. In 32 handwritten pages, printed in Philadelphia’s American Daily Advertiser on Sept. 19, 1796, the first President laid out many ideas that continue to shape the nation. He announced he would not seek a third term, setting the precedent for two-term presidents. He warned that “factions” or political parties could become a threat to unity, a notion that resonates in today’s particularly polarized political climate. He also issued guidelines for U.S. foreign policy that are still commonly cited today, as proponents of American isolationism often look back to his warning to “steer clear of permanent alliances with any portion of the foreign world,” which was inspired by his efforts to keep the U.S. neutral when France and Britain faced off during the French Revolution. Concerned that getting entangled in European conflicts could destabilize the new, weak republic, he advised only getting involved in “temporary alliances for extraordinary emergencies.”

Washington concluded by asking for forgiveness: “Though, in reviewing the incidents of my administration, I am unconscious of intentional error, I am nevertheless too sensible of my defects not to think it probable that I may have committed many errors. Whatever they may be, I fervently beseech the Almighty to avert or mitigate the evils to which they may tend…and that, after forty five years of my life dedicated to its service with an upright zeal, the faults of incompetent abilities will be consigned to oblivion, as myself must soon be to the mansions of rest.”

Andrew Jackson (1837): In the first formal farewell address since Washington—ghostwritten in large part by the Chief Justice of the U.S. Supreme Court, Roger Taney—Jackson harked back to that earlier version fondly as “paternal counsels…warning of us of the evil to come.” Now that the Constitution had turned 50, it was “no longer a doubtful experiment,” he said. But, though things had changed, Jackson did have some warnings of his own, speaking out against pork-barrel politics (it might turn Congress “into a scramble for personal and sectional advantages”) as well as a national banking system that he believed favored “money power” — a.k.a. East Coast manufacturers — over the “common man.” The speech illuminates its era’s shifting politics as, in the midst of westward expansion, more Americans were participating in national affairs. Because he was the first President who was not part of the founding elite, Whitney says, “the age of Jackson is considered a new era in American politics because now the so-called ‘common man’ could participate.”

Andrew Johnson (1869): When Johnson departed office, the North had won the Civil War, President Lincoln had been assassinated, citizenship was expanding and the nation was in the midst of a difficult Reconstruction period. At the same time, the first President to be impeached was trying to reconstruct his reputation. It didn’t work. Whitney ranks the farewell message that ran in the New York Times and other newspapers across the country as perhaps the least dignified farewell address in national history, because it reads less like an inspirational message and more like an attempt to settle scores and vindicate himself. He listed a so-called “catalog of crimes” committed by “pretended patriots” who strive “by every means, to keep open and exposed to the poisonous breath of party passion the terrible wounds of four-years’ war.” The New York Herald wrote that Johnson’s remarks “smell of chagrin, distrust, ill nature, and bad blood.” Johnson ended up sounding so “petty,” as Whitney puts it, that he may have given the idea of such a message a bad name — so bad a name that another formal farewell address would not be delivered for more than eight decades.

Harry S. Truman (1953): Truman revived the tradition of the farewell address, delivering the first such address to take the form of a speech broadcast from the Oval Office at 10:30 p.m. on Jan. 15, 1953. “Truman was at his best,” biographer David McCullough wrote in Truman. The speech remains an important reminder of how much the world had changed for Americans during his term and the years leading up to it, and how much that change had affected the role of the president. The country was still getting used to its top position in a new world order. It had overcome existential threats internally (the Great Depression) and externally (World War II) and “emerged as a superpower that, for the first time in her history, had responsibility for the entire free world. No previous presidents had faced such a global burden,” Whitney says. During the speech, Truman acknowledged that his decisions hadn’t always been the most popular — putting troops in Korea, dropping the atomic bomb — but asked the American people to put themselves in a president’s shoes: “I want all of you to realize how big a job, how hard a job, it is—not for my sake, because I am stepping out of it—but for the sake of my successor.”

Dwight D. Eisenhower (1961): In his farewell address, Truman’s successor discussed how being responsible for the entire free world posed “new and grave challenges to the U.S. foreign policy establishment,” as Whitney puts it. Though he expressed concern about a number of issues that remain relevant, like the need to preserve natural resources, one part of his speech stands out. The National Security Act of 1947 had created a unified military structure for the first time in American history, but that also meant the end of the balanced budget and the risk that American society would become militarized. As such, the former World War II general famously warned about the development of the military-industrial complex. “In the councils of government, we must guard against the acquisition of unwarranted influence, whether sought or unsought, by the military-industrial complex,” he said. “The potential for the disastrous rise of misplaced power exists and will persist.” He also laid out his vision of what the country’s role in this new world order should be: “America’s leadership and prestige depend, not merely upon our unmatched material progress, riches and military strength, but on how we use our power in the interests of world peace and human betterment.”

Richard Nixon (1974): The President who resigned after the Watergate scandal insisted that he wasn’t really saying farewell in farewell remarks to the White House staff on Aug. 9, 1974: “You are here to say goodbye to us. And we don’t have a good word for it in English—the best is ‘au revoir,’ we’ll see you again.” But, though Nixon’s speech does not belong on the roster of formal presidential farewell addresses, no list of White House goodbyes would be complete without it.

Perhaps seeking some pity, he quipped, “I only wish that I were a wealthy man” he said. “At the present time, I have got to find a way to pay my taxes.” He regaled his tearful audience with stories about resilience in people he admired, like his father, a California streetcar motorman who went on to own the “poorest” lemon ranch in the state. “Never be petty” were the words of wisdom from the man who kept a so-called “enemies list”: “Always remember, others may hate you, but those who hate you don’t win unless you hate them, and then you destroy yourself.” 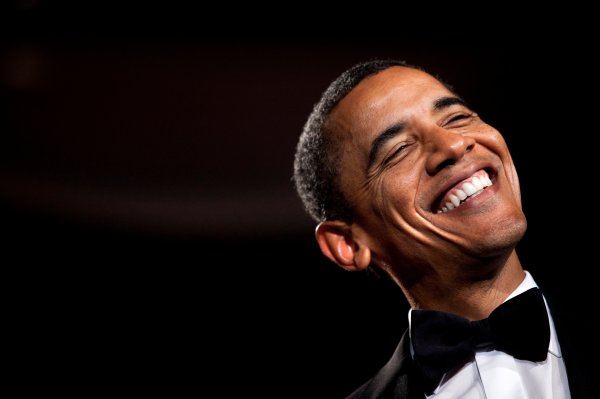 10 Times Barack Obama Confirmed He Was the Ultimate Dad-in-Chief
Next Up: Editor's Pick