Lawmakers in 6 More States Are Pursuing ‘Bathroom Bills.’ And That’s Just the Beginning

The battle of the bathrooms is about to resume.

Last year, North Carolina and South Dakota found themselves at the center of national controversies over transgender rights, after lawmakers proposed rules about who should be allowed in the men’s and women’s rooms. Despite the uproar those states endured, lawmakers in at least six other states have already filed bathroom-related bills: Alabama, Missouri, South Carolina, Virginia, Texas and Washington.

Texas Lt. Gov. Dan Patrick unveiled the Lone Star State proposal on Thursday. “This issue is not about discrimination — it’s about public safety, protecting businesses and common sense,” he said in a statement. “The left and the liberal media who oppose this legislation don’t understand it,” Patrick said in a previous press release that applauds North Carolina for not repealing their law, HB2, despite the loss of millions of dollars in economic impact. “Legislation to protect women’s privacy and business is essential.”

Patrick said last year that he would support a Texas “bathroom bill,” but lawmakers were not in session in 2016. LGBT rights advocates say they expect between 50 and 100 “hostile” bills from Texas alone in coming months. In 2016, advocacy organizations estimated that there were a total of 250 “anti-LGBT” bills proposed nationwide, though only a small proportion ever made it to a governor’s desk. It remains unclear how much traction this session’s bills might see.

Advocates expect the bills to come in three main forms, as they did last year: bathroom bills, religious freedom bills and preemption bills that keep cities from enforcing nondiscrimination protections for LGBT people. “Lawmakers are throwing spaghetti at the wall to see what sticks,” says Sarah Warbelow, the legal director for the Human Rights Campaign. “We do anticipate a continued onslaught.”

Though the language of the bathroom bills differs—with Alabama’s requiring an attendant outside any multi-sex bathrooms “to monitor appropriate use” and Washington’s protecting the right to restrict access based on “preoperative … genitalia”—the measures are part of the same culture war that has been growing since the same-sex marriage question was settled by the Supreme Court.

As the visibility of transgender people has increased, their bathroom use has increasingly become a target for social conservatives who believe the “lunatic Left,” as one North Carolina lawmaker put it, is going too far. Many who propose such bills believe gender is an immutable characteristic determined by anatomy at birth and that protecting a transgender woman’s right to use the women’s room will lead to “men in women’s restrooms.”

LGBT advocates call that argument a “red herring” that cloaks prejudice against transgender people and point out that policies that protect their bathroom access have not yielded problems in places that have had them on the books for years. “It’s easy to spread fear around transgender people,” says the Equality Federation’s Andy Garcia, noting that one of the organization’s key tactics is trying to introduce lawmakers and the public to transgender people who live in their communities.

As businesses and liberal organizations have rallied behind transgender people, some conservative lawmakers have dug in their heels. “If the priests of political correctness are going to call for the sacrifice of the privacy and security of the vast majority of the citizenry then there is going to be a fight,” Alabama state Sen. Phil Williams, who proposed that state’s bill, wrote in an op-ed last year. (Williams did not respond to a request for comment from TIME.)

Advocates have hoped that North Carolina—which is suffering a loss of what might be $500 million in economic impact over their law—would serve as a cautionary tale for other states. HB2 banned cities from passing LGBT nondiscrimination measures and required bathroom use based on birth certificates, which in turn led businesses and performers to boycott the state over policies they viewed as unfriendly to minorities. The NBA took the All-Star Game away from Charlotte, as PayPal canceled plans to add hundreds of jobs to the state.

In Texas, where both sides are gearing up for a fight, some are already trying to use the economic argument to stop lawmakers from going forward. A study commissioned by an organization called Keep Texas Open for Business—which was formed by the state’s chamber of commerce—estimated that passing legislation that is viewed as hostile to LGBT people could lead to a GDP loss of $8.5 billion in that much larger state, as well as the loss of up to 185,000 jobs. The research was conducted by St. Edwards University in Austin.

Texas’ chamber of commerce has not taken a position on whether there should be nondiscrimination protections for LGBT people, says Chris Wallace, the organization’s president. But he argues the legislation would cause economic fallout without solving any pressing problem. “Why would we want to risk any of that,” he says, “over something that is a non-issue?” 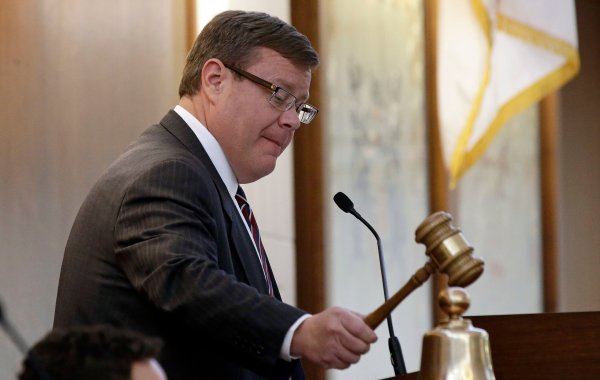