Michelle Obama Will Give Her Final Remarks as First Lady. This Is Who She’ll Honor

Michelle Obama will honor the school counselor of the year on Friday, dedicating her final public remarks as first lady to an issue she has championed during her tenure in the White House.

Terri Tchorzynski—a counselor at the Calhoun Area Career Center in Battle Creek, Mich.—was named the 2017 School Counselor of the Year by the American School Counselor Association, which awards the title based on leadership skills, contributions to student achievement and creative and effective counseling programs.

“I just do my job to the best of my ability, so to be honored at a national level like this is just awe-inspiring,” Tchorzynski, 37, told TIME. “This whole experience is just shocking to me because I do what I love.”

“You don’t think about the awards that may come with that,” she added.

In 2015, Obama began a tradition of honoring the school counselor of the year as part of her Reach Higher initiative to encourage post-secondary education—an issue she has said she will continue to work on after leaving the White House.

“To have the first lady say school counselors are important to the success of our students—it’s just a tremendous thing to have her on our team,” said Jill Cook, assistant director of the American School Counselor Association.

The Calhoun Area Career Center, which serves high school juniors and seniors, focuses on career and technical education. Cook said Tchorzynski was selected in part because of her role in that program.

“She has implemented an exemplary comprehensive education program,” Cook said. “What she has done there and the structures they have set up for opportunities for these students is really quite remarkable.”

Cook said one student, for example, graduated from the Calhoun Area Career Center as a certified emergency medical technician and is now planning to pursue medical school. During high school, Tchorzynski helped to place him in several job-shadowing programs at a hospital.

Both President Obama and the first lady have also spoken out about the value of career and technical education as an alternative to a traditional four-year college education.

“There’s a lot of conversation right now around career and technical education and the fact that it’s not that shop class that we may have in our heads when we think about career and technical education,” Cook said. “We need to destigmatize the notion—and our economy needs to destigmatize the notion—that the professions that require more technical training are less important than those that require a four-year college education.”

Tchorzynski, a former high school English teacher who has been a counselor for seven years, said counselors played an important role in her own education, and the profession “stood out above everything else” as an opportunity to help kids.

“There’s not a mountain she’s not willing to climb if that’s what it takes to help a student,” said Jamie Hess, another counselor at the Calhoun Area Career Center. “If that’s what that kid needs, that’s what she’s going to do to make it happen.”

Tchorzynski said her own kids—two sons, aged 7 and 5—are excited about their trip to the White House, though they’re too young to understand what it means. But Tchorzynski said she is looking forward to meeting the first lady.

“I’ll be in a unique position to thank her personally,” she said. 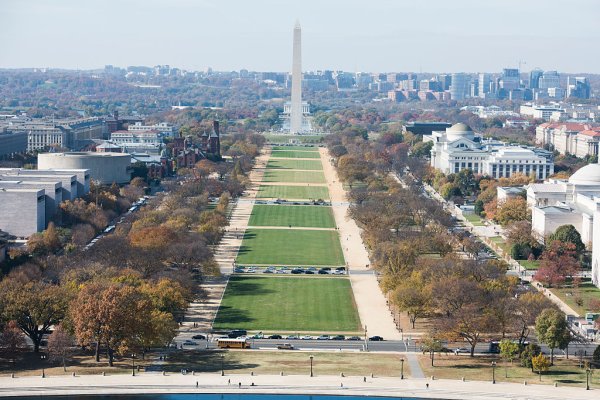 Here Are Some of the Events Planned to Protest Donald Trump's Inauguration
Next Up: Editor's Pick