Oil Industry Fears Trump May Hit Them Up on Tax Reform

An oil pumpjack works at dawn in the Permian Basin oil field on Jan. 20, 2016 in the oil town of Andrews, TX.
Spencer Platt—Getty Images
By Philip Elliott

Don’t crack the bottles of bubbly just yet, energy execs. Environmental groups might want to park their pitchforks for the moment, too. The new Republican Congress and incoming Trump Administration might have some surprises up their sleeves for both sides.

While the oil and natural gas industry’s lobbyists are clearly banking on friendlier partners for “smarter and forward-looking energy policies,” in the words of American Petroleum Institute chief Jack Gerard Wednesday, the sector is unlikely to get a permanent blank check. Instead, the let’s-make-a-deal era that Donald Trump promises to usher into Washington could end up asking companies to cover the costs of separate tax reform efforts in exchange for lighter regulation and more offshore drilling.

It’s merely the latest example that few things in the Age of Trump follows precedent, nothing is sacrosanct and special interest groups are mobilizing its allies to defend their interests. After all, Trump champions unpredictability as a negotiating tactic.

“We have an opportunity to change the national conversation when it comes to energy policy,” Gerard said at his group’s State of American Energy address. “We have a once-in-a-generation opportunity to find solutions for one of today’s most pressing issues.”

At the same time, Gerard hinted that the broad tax overhaul being written in Congress—with hefty White House-in-waiting input to come—could treat the energy sector differently than other industries. That, he said, was unacceptable. “We’d hope that any changes will make America more globally competitive (and) are even applied and mindful of the important role the oil and natural gas industry plays in job creation and economic growth,” Gerard said.

It was a sign that, despite Trump’s embrace of energy executives in his inner circle, the oil and gas industry cannot expect to get a total pass from Washington’s new regime. If anything, the cozy relationship between Trump and the oil fields could make it prime for P.R.-minded retribution to show just how they’re not best pals.

Big Oil is taking for nothing for granted and is boosting its own blitz of good stats to defends its profits and workers. At his annual event, Gerard reminded guests that almost 10 million American jobs are supported through the energy sector and roughly $70 million a day in federal taxes are paid every day. All together, the energy sector makes up about 8% of the country’s economy. Its size and reach give it tremendous power to shape U.S. public policy.

Trump has promised to be an ally of the energy industry, vowing to make the United States “energy independent” and to tap on- and offshore energy reserves on federal lands. His promises during the campaign made voters feel good about their candidate, but achieving these goals may be far more difficult than Trump let on—or realized.

Billionaire fracker Harold Hamm has been a top Trump adviser and has been one of the strongest voices goading the President-elect to scrap policies that constrain oil and gas companies. Trump tapped Exxon Mobil CEO Rex Tillerson (who once chaired the American Petroleum Institute) as his Secretary of State, Oklahoma Attorney General Scott Pruitt to lead the Environmental Protection Agency that he has repeatedly sued to block regulations, and former Texas Gov. Rick Perry to lead an Energy Department he once vowed to dismantle. It’s hardly the green team that Obama assembled with a Nobel Prize-winning scientist atop the list.

When he met with reporters after his speech, Gerard faced questions about the friendly tone between his group’s members and the Administration-in-Waiting. “These are world-class Americans, if you will, of vast experiences,” Gerard said. “We should all take a deep breath and collaborate.”

That collaboration may not exactly be what some oil and gas executives are seeking. Trump has shown time and again he will cut a deal and is seldom beholden to a rigid ideological line. On Capitol Hill, members are privately telling reps of all industries that there will be compromises. Congressional aides are hearing in response the political equivalent of “not in my backyard.”

One energy industry source tells TIME that his company worries that Republicans will give energy firms their wish list early on. Later, Congress would levy higher taxes on the boosted energy revenue to pay for proposed tax reforms that are likely an early bipartisan priority for the new Congress.

The delay would give oil and gas producers a chance for prices to recover from their recent slump. The timing would give these companies a chance for profits to climb again—and make an easier target for Congress to tweak taxes for them. Few industries are held in such low regard as oil and gas producers—or spend as much money to shape public opinion—and taxing them is a political solution that could cover that bill for lowering individuals’ and corporations’ tax rates.

An adviser to House Republican Leadership told TIME no decision has been made and these expectations are premature. After all, the new Congress has been in session for only one full day, the adviser said.

Across the Capitol, an aide to Senate Leadership said tax reform is a bipartisan priority and that conversations are in their earliest stages. Trump’s team hasn’t moved into the West Wing yet and will have a say when talks start in earnest later this month.

Trump, who takes his office on Jan. 20, has been a cheerleader for these oil and gas companies and has been brutally critical of Obama. Gerard, too, closed out the Obama Administration by looking forward to a “break from the recent past” and regulations he called extraneous.

Even so, new technologies that have emerged on Obama’s watch have made drilling easier and more profitable. When Obama came to power, the United States was producing 5.3 million barrels of oil at home, while that number rose to 9.4 million barrels a day by 2015. The result is, in part, cheaper energy costs that save the average family more than $1,300 each year, according to a National Association of Manufacturers study. 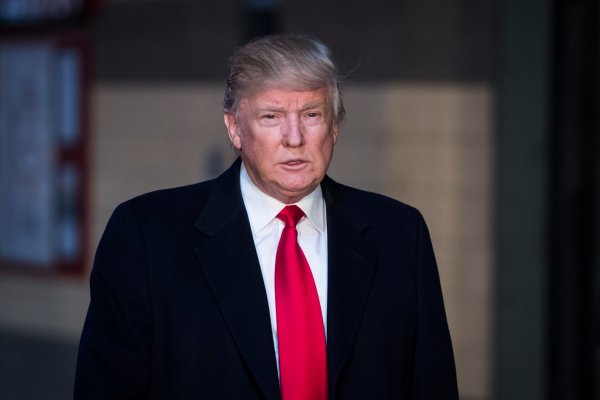