Megyn Kelly’s Move to NBC Was About Work-Life Balance

After months of speculation, Megyn Kelly confirmed Tuesday that she is leaving Fox News after 12 years for a new gig at NBC News, where she will host a daily daytime show and a Sunday newsmagazine program, as well as contribute to the network’s political coverage. Given Kelly’s current salary at Fox News—a reported $15 million per year—huge sums were being thrown around in the lead-up to the announcement, but in the end, money wasn’t the only factor in Kelly’s move. Ultimately, she chose a job that would give her more time for her family.

Interestingly enough, it was Kelly’s preference for a more family-friendly schedule got her into television in the first place.

The New York Times reports that Fox offered Kelly as much as $20 million a year to stay put, and that her outside suitors could not match that sum. What reportedly wooed Kelly to NBC was the daytime schedule offered by Andrew Lack, the chairman of the news division.

Kelly has, at times, been a vocal defender of working moms. She famously confronted conservative commenter Erick Erickson on her show in 2013 over his comments that it is “natural” for women to raise children and that men should be the primary breadwinners. Erickson argued that women who work are “hurting our children, and it’s going to have impact for generations to come.” Kelly tore into him on air. “I will start with you, Erick. What makes you dominant and me submissive and who died and makes you scientist-in-chief?”

Then, in a conversation with Facebook COO Sheryl Sandberg at Fortune‘s Most Powerful Women summit in 2014, she talked about the guilt that can come with being a working parent.

And she also has a history beyond the NBC move of seeking balance between her professional and family lives. In that same discussion with Sandberg, Kelly chronicled how she’d moved from a career as a lawyer to journalism about a decade earlier—in part because the news industry offered more flexibility.

“I was burnt out,” she said of her legal career. “I was about eight years into it, and I realized I am more interesting than this and I am more interested than this.” The hours were horrendous, she said. “All my weekends, all my vacations got burned; overnights, 3 a.m. all the time.” She wanted more stability at home and at work:

Kelly made the switch to journalism with the help of a woman she met at a guitar class who was a freelance reporter at a local TV station in Chicago. “She said, ‘I will help you,’” Kelly recalled, “And let me tell you, in TV a woman helping another woman break in is not that common. But she did it and in terms of the scale of journalism, my career has gone [up].”

In that instance too, Kelly chose flexibility over money—although the pay scale was a bit different back then. When she left her high-paying legal practice, it was for a TV job that paid $17,000 a year. 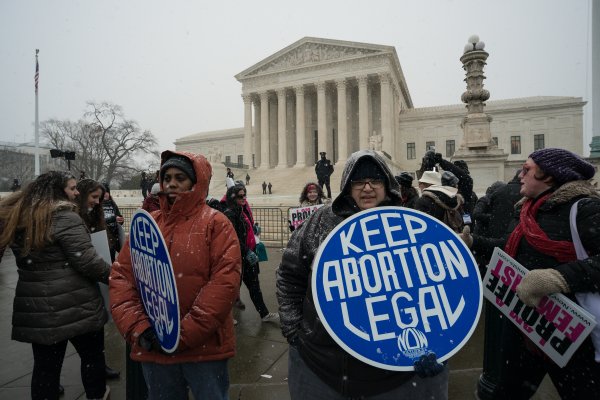 Most Americans Don't Want Roe v. Wade to Be 'Completely Overturned'
Next Up: Editor's Pick