President Obama to Democrats: 'Look Out for the American People'

President Obama visited Capitol Hill today to deliver a message to the Democratic caucus about his signature health care law: “Look out for the American people,” he told reporters as he sauntered out of the Capitol.

In a closed-door meeting with Democrats, the President instructed his colleagues not to let Republicans off the hook for their efforts to gut his health care law without a replacement, a plan that has already been set in motion by Republican Senators. Obama’s message to Democrats was that they needed to show a united front and put the burden of health care changes on Republicans.

“What the President is doing is helpful because he is walking through various ways to take one-sixth of the American economy, which is health care, and putting it into English,” said Oregon Senator Ron Wyden.

Representative Elijah Cummings told reporters after the meeting that Democrats would seek to hold the GOP accountable for what will come to the more than 20 million Americans who have gained health insurance under the Affordable Care Act.

“The question that has to be asked of the Republican Party is, Are you making things worse for the American people or better?” the Maryland Democrat said. “And do you have a replacement?”

At a press conference after the meeting, Democrats described the President’s message as “inspiring” and said they have a great deal of optimism about the future of the law, since they believe that Republicans will pay a political price for whatever happens to American’s health care. In the meantime, however, Democrats are chiding Republicans for seeking to repeal the law without a replacement. Senate minority leader Chuck Schumer spoke first, comparing Republicans to a “dog who caught the bus.”

“They have no idea what to put in place of the Affordable Care Act,” Schumer said, arguing that the GOP can’t keep the parts of the Affordable Care Act that Americans like without seriously disrupting the entire health-insurance marketplace. “We’re here today to warn the American people that the plan to repeal Medicaid, Medicare and the ACA will make America sick again.”

“First the Republicans have to accept the responsibility of showing us what they’re going to put in place of the Affordable Care Act, otherwise they’re inviting chaos and people lose their insurance,” added Illinois Senator Dick Durbin. “That’s the reality of repealing Obamacare.”

White House press secretary Josh Earnest told reporters at Wednesday’s press briefing that the President expressed to his colleagues that he was confident in their ability to go up against Republicans in the fight ahead, telling him that he was envious that they’d be the ones to carry it out. Earnest said Wednesday the President was not totally against Democrats and Republicans having conversations about fixing the law, but said an outright repeal should be off the table.

The President’s effort to rally Democrats was matched by Vice President-elect Mike Pence who met with Republicans and held a press conference with GOP leadership during Obama’s hour-long meeting with Democrats. Pence said Wednesday that tackling Obamacare was the first order of business for President-elect Donald Trump, who he said would issue executive orders to dismantle regulations and deliver on campaign promises on day one.

“The first order of business is to repeal and replace Obamacare,” Pence said, adding that it needs to be done “not just as a promise kept.”

The repeal process was set in motion on Tuesday when a budget resolution that lays the groundwork was introduced in the Senate; that resolution calls for repeal legislation by Jan. 27. Yet while Republicans are determined to repeal the law, there have been plans floated to delay it for up to three years in order to craft a replacement, though some conservatives want action to happen faster.

Republican Senators Rand Paul and Susan Collins have both said an Obamacare replacement would be needed immediately. The GOP is also facing warnings from President-elect Trump and Pence, who said Wednesday he told the Congress to take caution on repealing the law as to not leave struggling families out in the cold.

The warnings, however, likely will not stymie efforts to repeal the health care law, which House majority leader Kevin McCarthy called a failure during a press conference on Wednesday.

“Everything President Obama promised about health care has failed,” McCarthy said. “We are so thankful that we have a new Administration coming that had the wisdom to listen and the courage to lead.”

Both Republicans and Democrats plan in the days ahead to deliver a message to the American people that lays out the “truth” about the Affordable Care Act; though they disagree on what that means.

Republicans suggested they would continue to push blame on Democrats for the issues many have with the law, including high costs. On the other side of the aisle, Democrats appeared eager to make Republicans pay for any changes that come without a replacement. During the Democratic press conference, a placard carrying their new anti-repeal rallying cry, “Make America Sick Again,” was placed front and center. And it was there that House minority leader Nancy Pelosi said the only thing Republicans’ “repeal and replace” plan had going for it was “alliteration.”

— With reporting by Sam Frizell 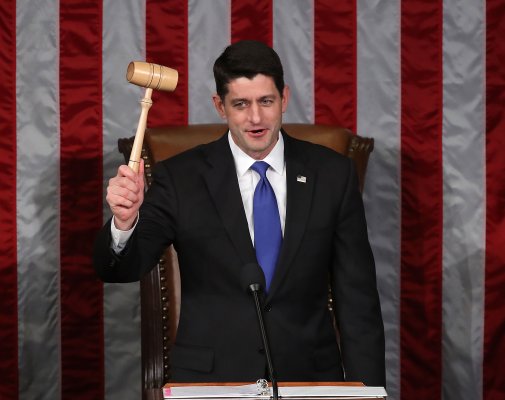 Congressman's Son 'Grounded' After Dabbing in Photo-Op With Paul Ryan
Next Up: Editor's Pick