In Carrie Fisher’s iconic, hilarious autobiographical novel Postcards From The Edge, the lead character Suzanne struggles, while in rehab, to understand how someone who’s had to suffer could believe in God. A woman visiting from AA tells her that God only gives people what He believes they can handle, so anyone grappling with a heavy load should take it as a compliment.

The line is classic Fisher. It’s dark, but wryly amusing to the reader who understands that Suzanne, an addict, will take any compliment she can get.

But it’s also fitting because for all of her privilege — born into a movie-star family and instant celebrity, not to mention beauty, talent and wit — Carrie Frances Fisher, who died Dec. 27 at the age of 60, was given an unusually heavy load. Born to actor parents who came with their own share of drama (Eddie Fisher allegedly fainted when Carrie was being delivered, guaranteeing, as she wrote in Wishful Drinking, that when she was born, she was “virtually unattended”), Fisher launched to stardom first with the release of 1975’s Shampoo and then solidified her permanent place in popular culture with 1977’s Star Wars. While she seemed to enjoy her glamorous life — reportedly having an affair with Harrison Ford, partying with the Stones, hosting Saturday Night Live and marrying Paul Simon — mental illness and addiction flourished away from the gleam of the spotlight.

But unlike most people who struggled with mental health and addiction in the ’70s and ’80s, Fisher shared her story with the world — first in Postcards and then in a succession of other books, including Wishful Drinking, Delusions of Grandma, Shockaholic and Surrender the Pink.

The significance of her choosing to open up about her struggles can’t be stressed enough. We live in a world where we’re supposed to only be projecting lives that showcase our prettiest parts and shroud the darkness; the female lead of the most iconic movie of its time was pretty much obligated to only show the bright and shiny. Fisher took the opposite route.

But what’s just as important as the fact that Fisher came clean about getting clean is how she did it. The woman was an unparalleled quip machine, and while that may not stand out in the tweetable world we now live in, no one was finding addiction hilarious in the ’80s. Then along came a book that opened with the line, “Maybe I shouldn’t have given the guy who pumped my stomach my phone number but who cares? My life is over anyway.” The fact that the book was written by Princess Leia, of all people, meant that the way society looked at addiction would never be the same. When she later shared about being bipolar with similar hilarity, she gave mental-health awareness the same gift.

Because here’s the thing: one of the most shocking aspects of recovery is the realization that sober alcoholics and addicts are oftentimes hilarious about some of the darkest things imaginable. A 12-step meeting can be far more entertaining than a comedy club. It’s something that those outside of recovery can’t really understand — “What do you mean, you sit in church basements talking about your darkest moments and laugh?” But Fisher was the first to try to let so-called regular folks peak behind the sober addict’s comedy curtain.

I only have a writing career because of Carrie Fisher. When I got sober and knew I wanted to write a book about my experience with addiction, I read every addiction memoir out there. They were all gripping — until the person got sober and earnest, which made me want to take a long nap. I knew that if I fictionalized my story, I could make fun of myself more easily and thus have the sober part of the book be as engaging as the sections where the character was bottoming out. Could I fuse fiction and reality to make a funny book about addiction and recovery? Since Fisher had, I knew it was possible. So I took a page from Postcards when I wrote my book Party Girl.

But you don’t need to be someone who writes about addiction and mental health to know that losing Carrie Fisher is tragic — not only because she was too talented to leave us so soon but because we’ve lost the first voice that said, “Hey, I’m addicted and mentally ill — and I can laugh about it.” God gave her a lot, in many ways, and she changed the world with it. She mused in Postcards that she doesn’t miss “whole people” but the “things they do.” But we’ll be missing all of Carrie Fisher. 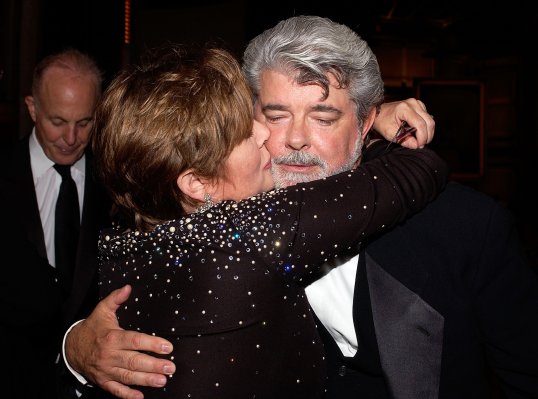