Here's What Carrie Fisher Thought About Life in Hollywood

Carrie Fisher, made famous by her iconic Star Wars role, is show business royalty — from Hollywood to galaxies far, far away.

The actress and author, who died Tuesday at 60, suffered a massive heart attack aboard an 11-hour flight from London to Los Angeles on Friday when she went into cardiac arrest.

From her first TV role at age 13 to landing the role of a lifetime as Princess Leia Organa, Fisher has had many ups and downs throughout her five-decade career — and chronicled them all with her signature wit and candor.

Below, read about Fisher’s life in Hollywood in her own words:

On her famous parents:

Fisher, who emulated her mother Debbie Reynolds’s big-screen success with her own career, was born to Reynolds and her then-husband, singer Eddie Fisher, in 1956. Fisher’s relationship with her father was famously distant when she was growing up. Eddie left Debbie for Elizabeth Taylor, then, as Carrie described, “basically fled the scene of the accident.”

The father-daughter pair reconciled before his death in September 2010. He was 82. “I saw him more on TV than on the planet,” she told reporters about her childhood, in the summer before he died.

Meanwhile her relationship with Reynolds, 84, is very close. Fisher debuted her mother-daughter documentary Bright Lights: Starring Carrie Fisher and Debbie Reynolds during the Cannes Film Festival in May. And in early 2015, Fisher presented the Singin’ in the Rain star with the prestigious SAG Life Achievement Award. “She has been more than a mother than me – not much, but definitely more,” Fisher, 58, joked during her speech. “She’s been an unsolicited stylist, interior decorator and marriage counselor.”

There’s no denying that Star Wars turned Fisher into an icon and gave her a Hollywood family just as famous as the one she was born into. In 1977, Fisher starred as Princess Leia Organa in the George Lucas-directed sci-fi classic.

“I knew that something enormous was likely going to impact my life from this film, and that there was absolutely no way of understanding what that was or was likely to be,” Fisher said last year in PEOPLE’s Star Wars special issue.

In 1980, she reprised her role as Princess Leia in The Empire Strikes Back, followed by 1983’s Return of the Jedi, in which she wore her infamous gold bikini (which was later auctioned off for $96,000).

And in April 2014, a new chapter, Star Wars: The Force Awakens, was officially greenlit with Fisher cast along with original trilogy costars Harrison Ford, Mark Hamill and Peter Mayhew. The J.J. Abrams-directed film was released in December 2015.

On her high-profile lovers:

Fisher was briefly engaged to actor and comedian Dan Aykroyd, who proposed on the set of their film The Blues Brothers in 1980. “Dan proposed in my trailer,” Fisher told PEOPLE. “I was choking on a brussels sprout, and he gave me the Heimlich … a few minutes later, he asked me to marry him.”

The pair broke it off when Fisher reunited with former boyfriend Paul Simon, whom she had dated on and off since 1977. She and Simon were married from August 1983 to July 1984 until their relationship combusted.

“Good wedding, bad marriage. We had great fights,” Fisher told PEOPLE. A few months after their divorce, Fisher and Simon dated again briefly and even lived together for some time. Their romance would go on for a total of 12 years.

On her affair with Harrison Ford:

In November, Fisher revealed to PEOPLE exclusively that she had a whirlwind 3-month affair with Star Wars costar Harrison Ford while filming in 1976. After closely guarding the secret for 40 years, she shared details of their “intense” romance. At the time of the affair, Fisher was 19, she and Ford was a 33-year-old married father of two. “It was Han and Leia during the week, and Carrie and Harrison during the weekend,” she recalled.

Fisher recounted their time affectionately, telling PEOPLE, “I was so inexperienced but I trusted something about him. He was kind.”

On her bipolar disorder:

In 1985, Fisher was diagnosed with bipolar disorder. “My illness took hold when I was 14 or 15 years old — my father had it too,” Fisher told PEOPLE in 2013, adding that she managed her illness with medication and electroconvulsive therapy for many years.

“Having had this illness my entire life, I accommodated it by developing a very big personality,” she said. “Over the years, writing about [having bipolar disorder] did help me to be able to talk about my illness in the abstract, to make light of it. That’s my way of surviving, to abstract it into something that’s funny and not dangerous.”

On her drug issues:

Fisher was introduced to marijuana when she was 13. In her 1987 bestselling semi-autobiographical novel, Postcards from the Edge, she discussed using drugs such as cocaine, LSD and painkillers. “I couldn’t stop, or stay stopped. It was never my fantasy to have a drug problem,” she wrote about her addictions. “I’d say, ‘Oh, f— it, I haven’t done anything for a couple of months, why not? Let’s celebrate not doing them by doing them.’ I got into trouble each time. I hated myself. I just beat myself up. It was very painful.”

She was already heavily involved with drugs when she first was introduced to Simon while filming Star Wars. “Drugs was one of the hands — one of the baby hands — that pulled us down into the mess,” she wrote in Postcards. “We went through a lot to be together. We didn’t make it.” 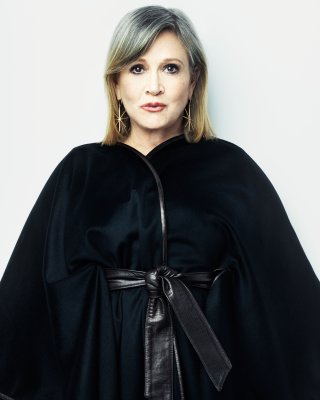 Carrie Fisher Dies at 60
Next Up: Editor's Pick