Carrie Fisher Made Grand Virtues of Being Fearless and Funny

For people who grew up with the Star Wars franchise, as well as for younger folk who have found their way to the films in more recent years, Carrie Fisher’s Princess Leia represents an indelible part of childhood. But you don’t need to have an affinity for the Star Wars universe to see that Princess Leia is simply glorious. Fisher was barely in her early 20s when she appeared as Leia in the 1977 film now known as Star Wars Episode IV — A New Hope: she’s a radiant, wisecracking presence, walking the fine line between taking the character seriously and practically breaking the fourth wall to ask us, “Can you believe this hairdo?” Yet even though the medieval Cinnabon coif has always been an easy target for jokes, the astonishing thing is how well Fisher carried it off. That hair was meant to be an exaggeration, a silhouette straight of old-school movie-matinee serials and Sunday funnies. Its crazy excessiveness wasn’t a 1970s-era lapse in taste; like the horned headdress of Wagner’s Brünnhilde, it was the whole point. No wonder Fisher’s Leia — with that bisque complexion, those tender-soft yet sparkling eyes, and yes, that earmuff hair — is one of the most enduring images of 1970s and 1980s pop culture. She was the diva of one of the grandest space operas of all time, and she owned it.

Yet there was more to Carrie Fisher — who died on Dec. 27, at age 60 — than that one ultra-famous character, and the road map of her career suggests that she was pedaling as fast as she could to show the world what else she could do. The child of showbiz parents, Eddie Fisher and Debbie Reynolds, she threw off major sparks of precociousness in her first film role, as a sly, rich-girl teenager in Hal Ashby’s 1975 Shampoo. Her Lorna is a curvy tomboy princess, giving off a million signals at once as she seduces Warren Beatty’s George (the hairdresser, and paramour, of her mother, played by Lee Grant). Lorna’s on the family tennis court, an underage vixen in kneesocks, when he arrives. She leads him into the kitchen and fixes him something to eat, barely missing a beat between the lines “Chopped liver?” and “Are you gay?” She’s impetuous, calculating, extraordinary: It’s the kind of debut that promises great things.

Despite roles in pictures like When Harry Met Sally and Hannah and Her Sisters, Fisher could never get past the character-actress designation. She did, however, prove to be a lively and prolific writer. Her 1987 semiautobiographical comic novel Postcards From the Edge (later adapted into a movie starring Meryl Streep and Shirley MacLaine) detailed a young actress’s drug-rehab misadventures. It was hip, irreverent and dishy, a forerunner of what later came to be known as chick lit. When it came out, young women everywhere seemed to be reading it, and there was nothing quite like it on the landscape. Because Fisher was born into showbiz, she was not in awe of its magic. She was always prepared to talk about how the sausage was made.

Fisher may not have gotten many good movie roles, but she kept writing. At the time of her death she was promoting her most recent book, The Princess Diarist, based on journals she kept during the filming of Episode IV — A New Hope, back when it was just Star Wars. And she turned one of her books, 2008’s Wishful Drinking, into a terrific one-woman stage show, one that dug deeply into her own addiction problems and bouts with mental illness without a scrap of self-pity. Fisher had a sense of humor about everything, particularly herself. And though she never undervalued the Bunned One’s significance to millions of fans, or the fame and money it brought her, she became a master of the breezy, self-deprecating Princess Leia joke: at one point in Wishful Drinking, she donned the familiar wig and rattled off a list of Star Wars merchandising deals she’d made over the years. “If someone offers to turn you into a Pez dispenser, do it!” she urged. “Because it’s just made my life better.” 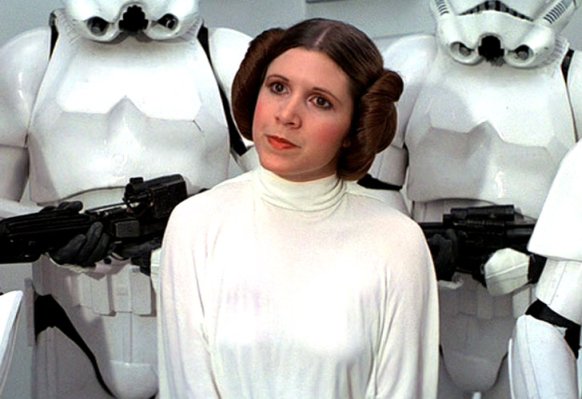