Congress Should Investigate Russia Along With Donald Trump’s Finances

Vladimir Putin, Russia's president, reacts during the Japan-Russia Business Dialogue in Tokyo, Japan, on Dec. 16, 2016.
Kiyoshi Ota—Bloomberg/Getty Images
Ideas
By Daniel Benjamin
Benjamin, who served as Coordinator for Counterterrorism at the U.S. State Department, is director of The John Sloan Dickey Center for International Understanding at Dartmouth College.

Donald Trump’s refusal to take seriously Russian interference in the presidential election is darkening the clouds that already hang over the legitimacy of his victory. Without question, a special select Congressional committee is required to investigate the Kremlin’s work to undermine Hillary Clinton’s campaign and secure the White House for her opponent. Senator Mitch McConnell’s effort to bury the investigation in the usual committees is a recipe for slow-rolling an urgent inquiry.

But the inquiry can’t stop at Russia’s actions. It must also ascertain whether the Trump camp colluded in any way with Vladimir Putin. Equally important, it must further ensure that Trump’s financial entanglements do not threaten U.S. national security. Each of these points is connected.

Congress can start by enacting legislation that requires Trump and all future presidents to disclose all financial documents necessary to establish the full scope of their business dealings, including their tax returns. That there isn’t already such a requirement can be chalked up to the fact that there has never been a need for such legislation. Previous—and poorer, less avaricious—presidents approached such matters like Caesar’s wife, so they would be beyond reproach on issues of conflict of interest. Trump has spurned these concerns with the nonsensical remark that “the president can’t have a conflict of interest.” That line, which recalls his idol Richard Nixon’s “When the president does it, that means it is not illegal,” suggests that for Trump, there can be no distinction between his interests and the nation’s.

Which is exactly why legislation is necessary—and Republicans should support it.

So much should be obvious. But Republican glee at capturing the White House seems to have smothered what should have been an instinctive horror at the Russian hacking. Republicans, who have spent decades portraying Democrats as soft on national security and themselves as hardheaded realists, are exposed on the issue of Putin and Trump. Moreover, there is nothing guaranteeing that future outside interference in our elections will benefit only the GOP. Yet to date, only a few Republican senators, led by John McCain and Lindsay Graham, have been prepared to call the Kremlin’s meddling the outrage that it is. (Though more GOP officials are reportedly wondering how they became the party of Putin.)

Russia—and the Soviet Union before 1991—has been employing “information operations” for decades to undermine ideological opponents in elections outside their borders and to turn the tide in national debates over strategic issues. The advent of the Internet—and with it the ability to gain access to years of confidential email correspondence and deploy thousands of fake news stories—has given Russia and other hostile powers an advantage unlike any they had ever dreamed of. That’s why in this year’s presidential race, the Kremlin saw its wishes come true on an unprecedented scale. Our elections are more integral to our sovereignty than our rule over any patch of territory. Right now, one would have to judge we are not in control of them.

No one can provide forensic proof that the release of the Democratic National Committee’s and Hillary Clinton Campaign Chair John Podesta’s emails (the latter of which were released just hours after the Access Hollywood tape of Trump bragging about his sexual predations surfaced) and the deluge of fake news, which got more than 225 million views, made the difference on November 8 because no one can establish with certainty what impelled voters to pull the lever for Trump. But given the incredible amount of press attention to such minor scandals as Debbie Wasserman Schultz’s scheming against Democratic contender Bernie Sanders or the pullulating stories about Clinton’s health, no serious observer could think otherwise. To repeat the facts: Trump’s margin of victory was a mere 80,000 votes out of 14 million cast in Wisconsin, Michigan and Pennsylvania—a little more than a half of one percent, an electoral whisker. Of course the Russian intervention made that difference—along with some independent assistance in driving down Clinton’s support by FBI Director James Comey.

As the wide disparity in polls about the issue suggest, the American public is bewildered by the hack and unable to assess its importance, in part because the leaked material was treated as fair game by the press and because we don’t have a lexicon for grading cyber events the way we do acts involving the use of force. But as a longtime national security official, this covert operation qualifies for me as unmistakably hostile and too close on the continuum to an act of war to let pass. My former colleague and former Deputy CIA Director Michael Morell went even further and called it “the political equivalent of 9/11.” It is staggering that Republicans, who from the Russian Revolution until their party’s last national convention, prided themselves on being the steel in American resolve against Russian expansionism, are so slow to bestir themselves.

So why tie this to Trump’s finances? Because Trump’s reaction to the hack and his unrelenting admiration of Vladimir Putin are so out of line with prevailing views about Russia and reasonable expectations that everyone should wonder what is going on. Any half-thoughtful response from Trump would have at least noted the gravity of the charge and that our electoral process is a vital U.S. interest. Instead, Trump rejected the U.S. intelligence community’s assessment of Russian involvement and accused it of politicization. (That alone strengthens the argument that the man is fatally cavalier about American national security.) Shooting wildly like this only feeds the suspicion that Trump and Vladimir Putin are in cahoots.

My hunch is not necessarily that money is flowing one way or the other between these two, but that Trump’s financial exposure—in the form of Russian investment in the Trump Organization or debts that Trump has to Russian oligarchs close to Putin—has conditioned his thinking about Russia. I’m hardly the only one wondering about this bizarre relationship. From former CIA Director Michael Hayden, who called the real estate mogul Putin’s “useful idiot” just before the election, to New York Times columnist Nick Kristof, who called him the Russian strongman’s poodle this week, the astonishment is spreading.

I don’t know if I’m right about Trump and the Russians. But I do know we shouldn’t leave this in the realm of the conspiracy theory. During the campaign, Trump tweeted, “I have nothing to do with Russia,” and “For the record, I have ZERO investments in Russia.” But his son Donald Trump Jr. observed in 2008 that “Russians make up a pretty disproportionate cross-section of a lot of our assets,” adding, “we see a lot of money pouring in from Russia.”

Whatever became of all that cascading money? These are questions we should not need to ask. But we do, because Trump, despite winning the presidency, has shown himself unable to walk away from his business through divestiture. With the increasing dominance of the rich in politics—and in both parties—this is a problem that won’t end with him. So Congress must act to ensure that U.S. national security isn’t a secondary concern of American leaders. 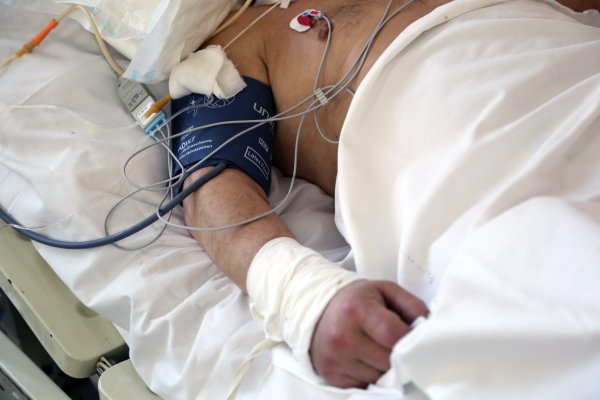 58 Dead In Russia After Drinking Bath Lotion
Next Up: Editor's Pick