President-elect Donald Trump speaks to reporters at Mar-a-Lago in Palm Beach, Fla., where he is taking meetings on Dec. 21, 2016
Jim Watson—AFP/Getty Images
Ideas
By Karl Vick
Karl Vick is a TIME correspondent based in New York. From 2010 to the autumn of 2014 he was the Jerusalem Bureau Chief, covering Israel and the occupied Palestinian territories with occasional forays into other lands.

ISIS may be losing ground in Iraq and Syria, but things are very much moving its way on the next battleground: the realm of terrorist attacks like the truck rampage in Berlin. The group thrives on the kind of clash-of-civilizations rhetoric frequently invoked by populist politicians across the West — especially President-elect Donald Trump, who as a candidate famously declared, “I think Islam hates us.”

Counterterrorism experts warn that Trump’s them-against-us approach both encourages extremists and makes it harder to detect their plots, by discouraging cooperation from moderate Muslims. The likely result is a dangerously escalating cycle of attacks and reactions that fuel more attacks.

“There’s a pretty perfect storm brewing, insofar as the rise of populist nationalism in Europe and in the United states plays perfectly into the terrorists’ narrative,” Daniel Benjamin, a former counterterrorism chief at the State Department who is now at Dartmouth, tells TIME. “As we know, ISIS was using Donald Trump in its propaganda to try to enhance its recruitment. It’s now in a much better position to make the case that the West really is determined to destroy Islam and it’s an unalterable enemy, as it has been characterized since bin Laden.”

Many counterterrorism veterans have expressed alarm at Trump’s sweeping condemnation of the Muslim faith, which wipes away crucial nuances painstakingly maintained since President George W. Bush, who after the 9/11 attacks made a point of targeting only violent extremists. “Islam is peace,” he declared in a visit to a Washington mosque just six days after the attacks; the White House used the quote as the headline on its press release about the visit.

By contrast, Trump drove home his Manichean approach to Islamist terrorism by naming as his National Security Adviser a former general who tweeted: “Fear of Muslims is RATIONAL.” Retired Lieut. General Michael Flynn, who ran the Defense Intelligence Agency for three years, also gave a speech declaring “Islam is a political ideology” that “definitely hides behind this notion of it being a religion.” Some Trump supporters publicly frame the battle against Muslim terrorists through the prism of the Crusades. The terrorists do, too.

ISIS speaks openly about its desire to push apart Muslims and non-Muslims, calling in its magazine Dabiq for the “the extinction of the gray zone” where people of different faiths exist in trust and peace. A clash of civilizations is exactly the fight they want. The group was flummoxed by the mass exodus of Syrians to Europe last summer, and stymied by the warm welcome they initially received in Germany. But the subsequent political backlash against the refugees has given ISIS heart, even as it loses the self-declared “caliphate” intended as a beacon and future homeland for the devout.

The group did not actually expect Americans “to dig their own graves” by electing Trump, a top ISIS commander told Reuters after the election. But the extremists declared themselves delighted by the outcome. “This guy is a complete maniac,” said Abu Omar Khorasani, the group’s top commander in Afghanistan. “His utter hate towards Muslims will make our job much easier because we can recruit thousands.”

A great deal of damage has already been done. Trump’s statements during the campaign will stand forever online, feeding both the feelings of aggrievement that drive extremism and also tolerance by moderate Muslims of terrorist acts against the West. “We will see violence by people who aren’t specifically recruited by ISIS but who just feel events are too horrible to go unanswered,” says Benjamin. “We’ve seen a growing number of people in the last few years who seem to have not to have known what they are doing but have just snapped.”

There was, however, a glimmer of hope that Trump may be educable on the basics of counterterrorism. His initial reaction to the Dec. 19 Berlin attack — in which 12 people were killed at an open-air Christmas market by a heavy truck — played into the extremists’ hands by framing the attack in explicitly religious terms. “ISIS and other Islamist terrorists continually slaughter Christians in their communities and places of worship as part of their global jihad,” he said in a statement released on Monday.

But on Wednesday, when asked about the language, Trump walked it back, first professing ignorance of the statement (“Who said that?”) then reframing the issue in broader terms: “It’s an attack on humanity,” Trump said, and then repeated the phrase a second time. Standing behind him, Flynn nodded gravely. 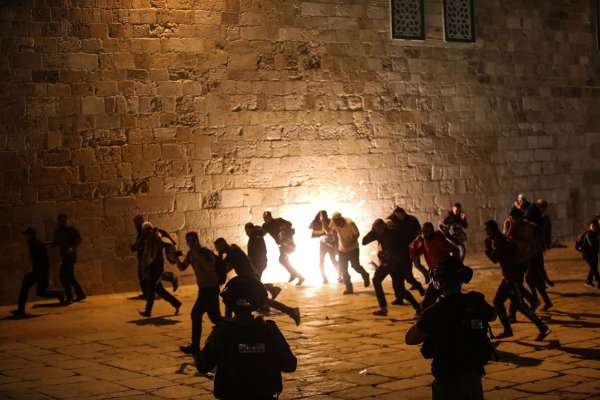