A popular YouTube star was kicked off a Delta airlines flight Wednesday after he spoke Arabic to his mom on the phone and brought “discomfort” to other passengers shortly before takeoff, the airline and the ejected man said.

Adam Saleh, who has more than 1.6 million subscribers on YouTube, posted videos on Twitter of his encounter on the New York City–bound flight from London. He appears distressed and calls other customers “racists” as he and his friend are led off the plane.

“We’re getting kicked out because we spoke a different language. This is 2016. I can’t believe my eyes. I’m about to cry right now. Seriously,” he says in one of the videos.

Saleh says in the footage that about six white people complained about him after the phone conversation with his mother. His videos quickly went viral and sparked intense outrage on Twitter from people who promised to boycott Delta.

In an initial statement, Delta said that two people had been removed from the flight after a “disturbance in the cabin resulted in more than 20 customers expressing their discomfort.” “We are taking allegations of discrimination very seriously; our culture requires treating others with respect,” the airline said at the time.

In an updated statement Wednesday night, Delta said the passengers had caused disruption with “provocative behavior.”

“Upon landing the crew was debriefed and multiple passenger statements collected. Based on the information collected to date, it appears the customers who were removed sought to disrupt the cabin with provocative behavior, including shouting,” the airline said in the statement. “This type of conduct is not welcome on any Delta flight.”

The company added: “What is paramount to Delta is the safety and comfort of our passengers and employees. It is clear these individuals sought to violate that priority.”

Saleh is known for pulling pranks and publishing them on his YouTube channel. Most recently, he made headlines for appearing to smuggle himself into another city by hiding inside a suitcase, which he later admitted was fake.

Saleh later wrote on Twitter that he and his friend were later rebooked on another flight with a different airline following more security checks. 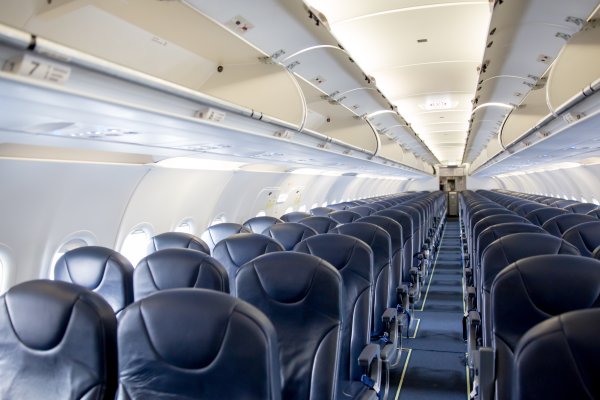 Why Do Airplanes Dim the Lights for Takeoff?
Next Up: Editor's Pick