When 22-year-old Mohammad left Libya’s coastline in a decrepit wooden boat headed for Italy in August, he had no illusions about where he would end up.

Unlike many smugglers in Libya who lure clients in with false promises of reaching Europe within hours, his agent was brutally frank. It would take about three hours to reach international waters, he explained. Once there the boat would drift until spotted by one of the humanitarian rescue vessels plying the central Mediterranean, at which point he and his fellow passengers would be taken aboard and transferred to Italy, where they could apply for asylum.

To Frontex, the European Union’s border and Coast Guard agency, such instructions are proof that the dozen or so nongovernmental organizations (NGOs) currently running rescue operations in the Mediterranean are contributing to Europe’s migrant crisis, according to confidential reports recently obtained by the Financial Times. (The newspaper later retracted claims Frontex had accused NGOs of collusion with smugglers.)

Migrants were given “clear indications before departure on the precise direction to be followed in order to reach the NGOs’ boats,” the reports say. But does the fact that smugglers are taking advantage of humanitarian groups’ mandate to save lives necessarily mean that the NGOs are in cahoots? Or are the NGOs just the latest scapegoats for Europe’s growing migrant crisis?

More than 179,000 migrants crossed the central Mediterranean from Libya to Italy this year, according to the International Organization for Migration (IOM). At least 4,400 died in the attempt. It is all but impossible for an inflatable rubber raft or a dilapidated wooden dinghy to survive the crossing from Libya to Greece, so it is reasonable to assume that every single one of those who made it to Italy was rescued at sea. Some were picked up by military vessels, others by passing commercial ships that are bound by maritime law to come to the aid of boats in distress. But a significant number are rescued by the humanitarian vessels that ply the international waters off the coast of Libya on the lookout for migrant rafts at risk of capsizing.

In August, I spent a week on the MV Aquarius, a rescue vessel jointly operated by international medical humanitarian organization Médecins Sans Frontières (MSF), or Doctors Without Borders, and the search-and-rescue organization SOS Méditerranée. Even then, before the number of crossings this year eclipsed all previous counts, the question of whether or not the widely reported rescues encouraged more migrants to risk the passage sparked fevered debate.

“To know the answer to that question, you would have to stop the operations and see how many people would die before they stop leaving Libya,” Federico Soda, director of IOM’s Coordination Office for the Mediterranean, told me at the time. Three out of every four migrants who died crossing borders in 2015 died on the Mediterranean, he noted, and that was with the rescue efforts in place. “Fortunately, people in the E.U. and Italy are not simply going to let tens of thousands drown.”

But that doesn’t stop anti-migration activists or E.U. agencies like Frontex from casting blame on the humanitarian organizations bringing the migrants to shore, especially now that many E.U. member nations are actively lobbying against accepting refugees. Frontex also cited in its reports the fact that the number of distress calls had gone down, even as rescues increased; further proof, the agency says, that the humanitarian organizations are actively seeking out migrant boats. But if MSF and other groups like it aren’t out patrolling the edge of Libya’s coastal waters, it is likely that scores of smuggler rafts would disappear without a trace as few are equipped with the kind of satellite phones or sophisticated radio gear necessary to make an emergency call for help. “We can’t let them die,” Soda said. “You don’t fix problems with relief operations; you minimize loss of life.”

Like Mohammad, many of the other people rescued by the MV Aquarius when I was aboard told me that they had no choice, that staying at home was impossible. MSF’s onboard doctor, Canadian Sarah Giles, said much the same. “Whether we were here or not people will come anyway. And they will die anyway. And we can look at the pull factors, but I think it is much more important to look at the push. And that goes back to the problems in people’s home countries.”

There is no doubt that migration is a growing concern in Europe. But it’s not an issue that can be stopped in the Mediterranean. By the time the migrants have gotten that far, it is already Europe’s problem, and blaming the people trying to save lives won’t fix anything at all. 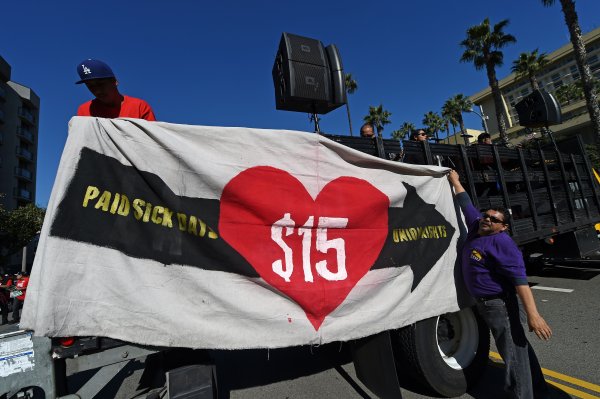 A $15 Minimum Wage Is Not the Best Way to Help Poor Workers
Next Up: Editor's Pick