Two former emergency managers in Flint, Mich., were criminally charged Tuesday with multiple felonies for their role in the city’s water crisis. The charges are the most significant so far in the state’s ongoing investigation into Flint’s lead-tainted water.

On Tuesday, Michigan Attorney General Bill Schuette charged Darnell Earley and Gerald Ambrose with false pretenses for allowing the city’s water treatment plant to operate even though it was not ready to properly treat the water from the Flint River, which resulted in lead-contaminated water being piped into residents’ homes. They are also accused of misusing funds in connection with the now-disgraced plan to use Flint River as a source of drinking water while building a new pipeline to Lake Huron. Earley and Ambrose allegedly lied to Michigan Treasury Department officials about millions of dollars they spent on the new pipeline, saying the money was for a separate environmental clean-up project, the attorney general said.

The former officials, who are also charged with misconduct in office, face maximum sentences of 46 years in prison. In a news conference Tuesday, Schuette said that the charges “reach a higher level of responsibility” than previous ones involving the city’s ongoing water crisis.

Howard Croft and Daugherty Johnson, two former city officials who worked in Flint’s Department of Public Works, were also charged with felonies Tuesday for ignoring warnings that the city’s water treatment plant was not able to produce clean water. Each faces 40 years in prison.

Flint switched its water supply from Detroit to the Flint River in April 2014 to save money, but officials did not properly treat the water, which allowed lead from the city’s aging pipes to leach into the water supply. The city’s residents noticed problems with the water’s color and smell almost immediately. Some experienced severe rashes and hair loss, even as Flint officials routinely told them it was safe to drink. Earley, who was appointed Flint’s emergency manager by Gov. Rick Snyder in September 2013, oversaw the city’s switch to the Flint River. Ambrose was named emergency manager in January 2015 and served until April 2015.

Earley’s lawyer did not immediately respond to a request for comment; the former emergency manager has previously defended himself by saying that he was just following the course set by the mayor, city council and a previous emergency manager.

It wasn’t until late 2015 when researchers from Virginia Tech confirmed that the city’s water supply showed dangerously elevated levels of lead. Doctors in Flint later showed high levels of the toxin in blood samples in the city’s children. Lead is particularly dangerous for kids and can cause multiple development disorders.

City officials eventually declared a state of emergency and switched back to Detroit water, but the city’s supply is still not safe to drink and most residents are forced to use bottled water for drinking, cooking and bathing.

Nine officials tied to the Flint water crisis had previously been charged, most of whom were midlevel state employees in Michigan’s Department of Health and Human Services and the Department of Environmental Quality. With the addition of four more people charged Tuesday, Schuette said: “We are closer to the end than we are to the beginning.” 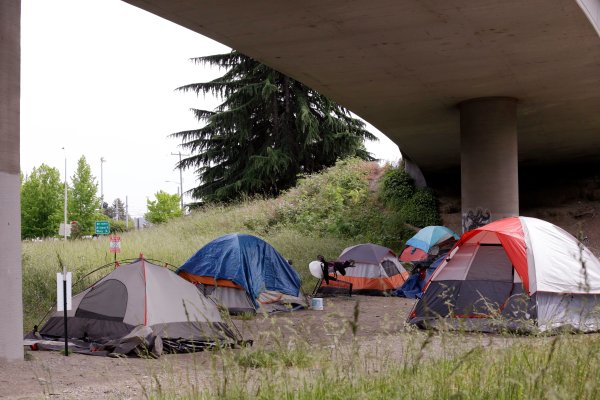 Seattle Grapples With Homelessness Crisis
Next Up: Editor's Pick