What to Know About the Berlin Christmas Market Attack

Twelve people were killed and nearly 50 wounded, some critically, when a truck deliberately plowed through a crowded Christmas market Monday evening local time in central Berlin. Here’s what we know so far:

The attack took place Monday evening at a Christmas market outside the Kaiser Wilhelm Memorial Church in the city’s center. The crowd was a mix of tourists and locals, shopping for gifts and enjoying the traditional festive atmosphere.

A man thought to be the truck’s driver was arrested near the scene, according to Winfrid Wenzel, the Berlin police department’s chief spokesperson. But German prosecutors released him later Tuesday, citing insufficient evidence, the Associated Press (AP) reported. Another man, identified as a 37-year-old Polish citizen, was also in the driver’s cabin but died at the scene.

The owner of the truck, Ariel Zurawski, told Polish media earlier that he feared the vehicle might have been hijacked, according to the AP. Using photos, Zurawski helped German officials identify the man in the driver’s cabin as Lukasz Urban.

“His face was swollen and bloodied. It was really clear that he was fighting for his life,” Zurawski said to Polish broadcaster TVN.

Deutsche-Welle reports that Breitscheidplatz, the square where the crash happened, is a very popular destination for visitors, situated between the Berlin Bahnhof Zoo and the city’s renowned Kurfürstendamm shopping area.

Was it a terrorist attack? Who did it?

German federal prosecutors, which handle cases related to terrorism, have taken over the investigation. German Chancellor Angela Merkel made a statement at 11 a.m. local time (5 a.m. EST) Tuesday, saying: “We must assume it was a terrorist attack.”

German Minister of the Interior, Thomas de Maizière, originally said in an afternoon press conference that the suspect was a man from Pakistan who had no prior terrorist record and had arrived in Germany in December 2015. He denied any involvement and was later released by German authorities due to insufficient evidence. It was also confirmed that the passenger found in the truck was shot by a pistol, which has not been recovered.

ISIS claimed responsibility for the attack through a statement issued Tuesday on the extremist group’s Amaq news agency. The statement said “the person who carried out the truck run over attack in Berlin is a soldier of the Islamic State and carried out the attack in response to calls for targeting citizens of the Crusader coalition,” according to the AP.

Holger Münch, head of the Federal Criminal Police Office, said at a press conference that they are working “on the assumption that an armed perpetrator is still on the loose. As a result of this we are on high alert,” the Guardian reports.

Police tweeted that they believe the truck was deliberately driven into the crowd.

Berlin’s police department announced shortly after 2 a.m. local time Tuesday that the crash killed 12 people, a rise from the initial death toll of nine. It also said that 48 others were injured, some of them severely.

Police are also saying that the rest of the city is safe at this point. “Currently, there are no indications of further dangerous situations,” the police department tweeted late Monday.

On Tuesday afternoon, police urged the public to take caution in light of the suspect denying involvement in the attack.

Citing local media, both AP and the BBC reported that a police raid has taken place at a shelter for asylum seekers in Berlin’s former Tempelhof airport. Neither the police nor German federal prosecutors have confirmed these reports.

Facebook has activated its safety check feature in response to the crash, allowing users in the city to notify friends and family that they are safe.

What have the reactions been?

Merkel said during her morning statement that she will visit the scene of the attack after meeting with her cabinet. “Millions of people, including me, are wondering this morning how we can live with the fact that a murderer brought death to so many during a carefree stroll around a Christmas market, that is, a place where actually we celebrate life” she said. “This unspeakable event will be as severely punished as the law will allow.”

She added that the suspected attack would be “particularly hard for us to bear” if the perpetrator turns out to be a refugee. “This would be particularly repellent, in the face of the many, many Germans who are engaged in helping refugees on a daily basis, and in the face of the many people who really need our protection and who make efforts to integrate themselves in our country,” she said.

“Germany’s far-right Alternative für Deutschland (AfD) party has blamed the attack on Merkel and her liberal policies on asylum seekers, according to AP and the BBC.

However, a lawmaker from Merkel’s center-right ruling party maintained that the government had taken measures to bolster domestic security.

“We have invested a lot in the last 12, 15 months into our domestic security. We have improved the co-operation among the services,” Roderich Kiesewetter said. “However, you never can exclude any attacks, especially of those who really try to attack German society on purpose.”

The German interior ministry has ordered flags at federal buildings in the country be flown at half-mast Tuesday as a sign of sympathy in the wake of Monday’s events.

In a statement, Ned Price, the spokesperson for the White House National Security Council, characterized the event as an apparent act of terror.

“The United States condemns in the strongest terms what appears to have been a terrorist attack,” he said, adding that “we stand ready to provide assistance” to Germany’s recovery and investigation efforts.

U.S. President-elect Donald Trump blamed Islamist terrorists for the bloodshed, saying that ISIS “and other Islamist terrorists continually slaughter Christians in their communities and places of worship as part of their global jihad.” He also tweeted about the attacks, imploring the “civilized world” to “change thinking.”

Senator Dianne Feinstein (D-Calif.), who serves on the Senate Intelligence Committee, also said that what happened in Berlin “has all the hallmarks of a terrorist attack,” according to ABC News.

The U.K.’s Foreign Office issued a travel advice for British nationals, urging them to “avoid the area” around the Kaiser Whehelm Memorial Church, where the crash happened, and to follow the advice of local authorities.

Sadiq Khan, the mayor of London, tweeted his sympathies.

By Tuesday morning, Nigel Farage — the man behind Brexit — wrote on Twitter that “events like these will be the Merkel legacy.”

Russian President Vladimir Putin called the attack “shocking” and sent his condolences to Germany. “This crime against peaceful civilians is shocking in its savage cynicism,” Putin wrote to Merkel and German President Joachim Gauck, according to a statement on the Kremlin’s website.

According to AP, Italian Foreign Minister Angelino Alfano said he was “deeply stricken and pained” by the carnage in Berlin, which he referred to as an attack, even though German authorities have not yet said if it was intentional.

In a statement provided by Italy’s foreign ministry, Alfano said that what had happened “won’t change our determination to combat terrorism” alongside international partners and in particular Germany, saying the two countries are in strict coordination.

The Czech Republic’s interior minister tweeted late Monday that security at crowded places across the country would be beefed up, reports AP. The country borders Germany’s southeast. 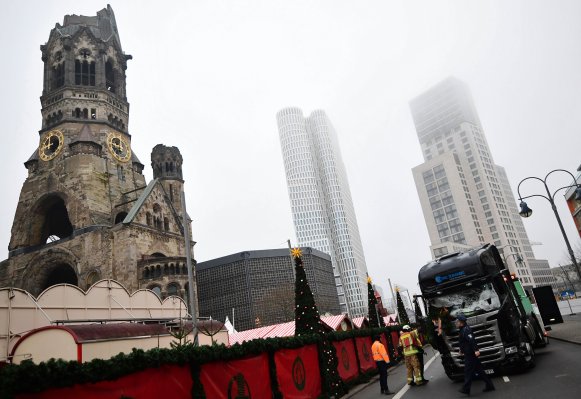