Are Some Years More Important Than Others?

Fireworks light up the London skyline and Big Ben just after midnight on Jan. 1, 2017.
Leon Neal—Getty Images
By Lily Rothman

Looking ahead to the big anniversaries that we’ll mark in the year ahead, a completely unscientific survey of those dates (conducted by reading through a list of hundreds and hundreds of dates that might be worth observing during 2017) seems to reveal that 25th anniversaries will be common. After all, the year 1992 was a big one. The European Union and NAFTA were both created, Bill Clinton was elected president, Queen Elizabeth called it the annus horribilis, and Dan Quayle misspelled “potato.”

But as we emerge from a world-shaking year into another that may do the same, that reaction is worth questioning. Is it really possible that 1992, or any year, was more important than other years?

A more common question is which year is the most important in history. Some years are routinely proposed as answers. For example, when Paula Mejia of Newsweek pondered the question in 2015, after 1978 was proposed, she ran through several contenders—1066, 1491, 1789, 1865, 1945, 1991 and more—but reached no answer. Some have suggested 2015, perhaps our last chance as a species to head off the catastrophic effects of climate change. And though it’s a different kind of superlative, the issue of whether 2016 was the worst year ever has been the subject of much discussion. Writing in The New Yorker, Jia Tolentino dispatched with the idea that the many things that happened in 2016 added up to the worst year ever, or that such a concept even means anything.

But once we move past trying to settle whether a single year is the most important, or the worst or best, is it even possible that a given year could be any more important than another?

One way to answer that question is that yes, some events end up affecting the course of world history more than other events do, and thus the years in which they happened are more important—but there’s no way to know which those years are.

The answers will always depend on when we ask the question.

On the most basic level, the mechanisms of asking evolve. When TIME looked at whether 2016 was really worse for celebrity deaths than other years, the results showed that one important factor was the change in the media ecosystem. The way we communicate affects which events get noticed and on how broad a scale. Today, thanks to the Internet, we just know about more stuff going on in the world than people in the past did.

Second, recent years may seem disproportionately important just because they’re recent. In his book Why Do Buses Come in Threes?, Rob Eastaway explains that the most important factor in determining whether an event appears to be part of a cluster is how memorable the first event is. Something that sticks in your mind is more likely to seem like it’s related to a more recent event, to seem like it has some larger significance. Things that you forget, it may go without saying, don’t seem so important. This is perhaps a reason why that giant list of 2017 anniversaries includes far more 15th-anniversary listings than 100th-anniversary listings, even though 100 is a more “important” number. We may have forgotten older events that really did matter, and some more recent events that now seem crucial will come to seem insignificant in time.

And finally, keeping in mind the so-called clustering illusion, the idea of an important year is just one more example of the way in which human minds tend to want to see disparate, random items as a group. A calendar year is a convenient grouping mechanism, and we’re all primed to see historical events through that filter. As mathematician John Allen Paulos smartly put it a while ago, after a notable run of celebrity deaths, everything comes in threes if you just wait for a third. When we ask which years are important, we impose a 12-month frame on events that neither start nor stop within that period.

The flip-side to this, as Eastaway points out in his book, is that sometimes things aren’t really random, and clusters are real. This is the case when events are connected to one other. And, when it comes to history, that’s pretty much always the case. Historical events don’t just materialize, and we can’t say for sure which part of a given story is most worthy of isolating. Take NAFTA, for example. If that deal is going to make a year important, should that year be 1992? Or should it be 1990, when negotiations began? Or 1994, when it took effect? Or 2016, when it became a major issue in the presidential campaign?

Looking at the years of the past, we still can’t tell which of them will ultimately matter most.

As for whether a given time can be less interesting than another, that’s one that—supposedly—does have an answer: In 2010, a computer scientist announced that, by his calculations, April 11, 1954, was the most boring day in the 20th century. 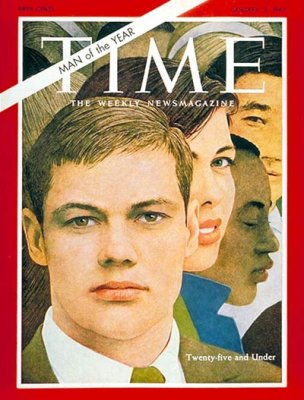 50 Years Ago This Week: How Young People Changed the World
Next Up: Editor's Pick