Lawmakers in North Carolina convened on Wednesday to reconsider a repeal of House Bill 2 — a controversial law that requires people to use the public bathrooms that match the sex on their birth certificate and essentially bans transgender women from the women’s room and vice versa for transgender men. But after nearly nine hours of protests, political maneuvering, and several votes, the law remained on the books just as it was before.

“We’re worse off now than we were when we arrived,” said state Sen. Floyd McKissick, a Democrat. “The public perception of North Carolina, rather than being enhanced, it’s going to appear that we doubled down and we failed.”

The issue began when Charlotte, the state’s largest city, passed a law early this year that prohibited discriminating against residents based on their sexual orientation or gender identity. (Despite wide belief to the contrary, most cities and states don’t explicitly prohibit such discrimination; neither does any federal law.)

Then, citing concerns about “men in women’s restrooms,” conservative state lawmakers convened a special session to pass HB2, a law that not only gutted Charlotte’s measure but prohibited any city from passing a similar one and enacted the birth certificate requirement.

It was widely reported that the incoming Democratic governor Roy Cooper — who campaigned on getting the law repealed — had brokered a tit-for-tat deal: if Charlotte would wipe its books of the non-discrimination law, state lawmakers would repeal HB2.

The city council in Charlotte did so (albeit in stuttering fashion) in meetings on Monday and Wednesday morning. But when Senate Republicans put forward a bill to repeal HB2 later that day, it came with a caveat: there would a “cooling off” period that would extend the moratorium on non-discrimination laws for several months.

That was a no-go for opponents of HB2 because it “looks as if we’re sanctioning discrimination,” as one Democrat put it. Nor was it “a repeal,” said state Sen. Angela Bryant, another Democrat, in the final minutes before the legislature passed a motion to adjourn for the holidays.

“It’s smoke and mirrors, it’s a mirage, it’s not real,” she added. “I don’t know if you think we’re stupid or the public is stupid … but it just does not make sense.” The gallery, where protestors lingered all day, broke into applause. When the legislature adjourned, they chanted “shame.”

Republicans argued that, while everyone wanted an end to the economic turmoil the law had brought on the state, a clean repeal would just lead to a repeat, with Charlotte or other cities passing laws that would inspire conservative lawmakers to intervene as they had before. (Many also alleged that the Charlotte city council had been offered the same deal in the past, but did not act while Cooper could use the law the bludgeon his opponent, Gov. Pat McCrory.)

Sen. Phil Berger, the Republican who authored the bill, said it offered a “reset” that would avoid the same fight being fought again while lawmakers worked to find compromise. “It gives everyone an opportunity to start over,” he said. “You don’t get those chances very often.”

“I have no faith in Charlotte,” said Republican state Sen. Buck Newton. “We’ll be back here trying to discuss the same thing again, over and over and over.” He characterized non-discrimination bills that protect transgender people’s right to use the bathrooms that align with their gender identity as the product of “the lunatic Left.”

The legislature will reconvene in 2017, but with both sides obstinate, it is unclear where lawmakers will find compromise. “No economic, political or ideological pressure can convince me that what is wrong is right,” Lt. Gov. Dan Forest, who presides over the state Senate, wrote in a statement.

Some of that pressure has come from the Obama Administration, which filed a lawsuit alleging that HB2 violated federal civil rights protections, a move that can jeopardize federal funds a state receives. Pressure has also come from a long lists of companies and executives who have vowed not to bring their business to a state where transgender people, or any other minority, do not appear respected.

The NBA moved the 2017 All-Star Game from Charlotte to New Orleans because of HB2. Bruce Springsteen canceled concerts. PayPal scrapped an expansion that would have added 400 jobs to the economy. By one liberal think tank’s estimate, the lost economic impact of passing the law — and keeping it on the books — totals more than half a billion dollars.

Because the law had become a key issue and point of contrast in the governor’s race, it arguably lost McCrory his bid for reelection, too. The sitting governor went down weathering the fallout, if also proving his social-conservative chops. “The only place where transgender people were on the ballot this year was North Carolina,” Mara Keisling, a prominent advocate, told TIME after the election results came in. “And we won.”

LGBT rights groups seemed prepared to accept Charlotte’s ending of explicit protections for transgender people if it meant an end to HB2. But when the “cooling off” caveat became known, the likes of the Human Rights Campaign quickly spoke out against the proposal, with officials saying it was clear that North Carolina is still “closed for business.” Many such groups have worked to draw attention to the economic problems, hoping this saga will serve as a cautionary tale for other states — like Texas — that are already gearing up to consider similar legislation come January.

“We came here to solve a problem,” said state Sen. Dan Blue, a Democrat, “only to accomplish nothing.” 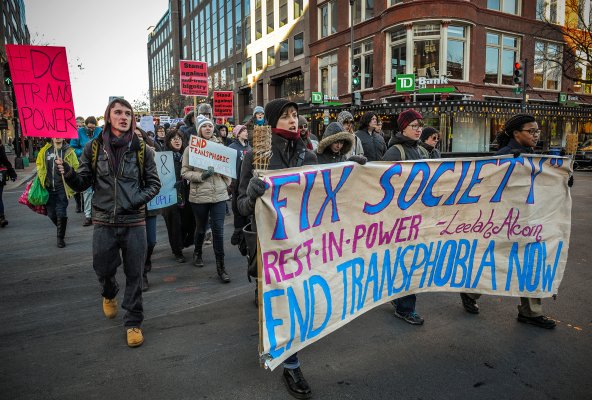 Beyond Bathrooms: Inside the Largest Ever Survey of Transgender People in America
Next Up: Editor's Pick