Security forces take into custody a protester as they take security measures in case people stage a protest after the postponing of the general and presidential elections due to financial problems in Goma, Democratic Republic of the Congo on December 19, 2016.
Jc Wenga—Anadolu Agency/Getty Images
Ideas
By Alyoscia D’Onofrio
D’Onofrio is the International Rescue Committee’s Senior Director of Governance and, from 2004 to 2008, was its representative in the Democratic Republic of Congo.

The Democratic Republic of Congo is once again on the brink, as a renewed political crisis threatens to reignite the fault lines, with dire humanitarian consequences, which have plagued this central African country for more than twenty years.

President Joseph Kabila’s second term has expired, yet there are no presidential elections scheduled until 2018—in violation of the DRC’s constitutional two-term limit. Political strife and unrest is on the rise, with calls for nationwide protest by the opposition. Should prolonged instability result from this crisis, it is the Congolese people who will suffer the highest costs.

The humanitarian consequences of Congo’s successive crises and protracted cycles of instability are dire, as each shock weakens the coping potential of an already beleaguered population. Despite its unparalleled wealth in natural resources—giving it the potential to be one of Africa’s richest nations—the DRC remains one of the world’s least developed countries. While the DRC’s GDP has tripled over the last decade, it has not translated into an improvement in access to basic and life-saving services for the average Congolese citizen. Nine in ten people in DRC—7.5 million if not more—are in need of urgent humanitarian assistance. Nearly one in nine lives on less than $1.25 a day. One in ten lacks access to adequate food, while one in two lacks access to safe water. This country, with five others, accounts for half of the world’s maternal mortality burden. Not only are half of the country’s children chronically malnourished, but the same proportion never finish elementary school. Adding to this dire situation is the presence of over 70 armed groups in the east, currently sending 1.9 million people fleeing from their homes.

These are the tragic results of a protracted and forgotten humanitarian crisis, exacerbated by an unresponsive state that prevents citizens from fulfilling their democratic rights and does not promote the provision of their basic needs—keeping Congolese trapped in a state of chronic deprivation and extreme vulnerability. Almost 80% of the population rejects a constitutional change to allow a third term for President Kabila, as found in a recent survey of over 7,500 individuals across the country by the Congo Research Group—and wants a president who “care[s] about people like me.” Congolese citizens want political elites to respect the constitution and the rule of law—across regional and ethnic lines—and, above all, share the desire for a state that truly cares for their needs.

As the DRC faces another shock to its fragile and fledgling institutions, with potentially disastrous humanitarian consequences, the International Rescue Committee calls on all actors in the DRC to listen to the voice of Congolese people and respect the rule of law, human rights and democratic participation to avoid continued and widespread suffering. The international community must double-down in unison on its commitments to Congo. Here are three key ways.

First of all, donor funding to Congo needs to hold the line and not be diverted elsewhere. With each crisis, the DRC faces a paradox: the donor and business community has decreasing confidence in the DRC as an investment prospect; that, in turn, threatens commitments even to funding lifesaving humanitarian assistance and essential services—and putting hard-won gains on these fronts at risk of reversal. The U.N. appeal for DRC steadily decreased over the past five years or more—with 2016’s ask a total of $690 million just over halfway funded as we reach year’s end. While U.N. appeals are usually halfway funded on average, headline-grabbing crises in Syria, Iraq and South Sudan compete for funding against DRC’s complex and protracted crises. Growing donor fatigue and the government’s subtle relegation of humanitarian response international agencies and NGOs exacerbates the situation.

Second, it is the quality and focus of this engagement that is key. Political and social transitions are long-term—and equally extensive international engagement and the will and determination of Congolese elites to contribute to meaningful change is essential for the future of the DRC. Donors and Congolese elites need to think long and hard about how year-on-year funding encourages or hinders necessary structural reforms, and how it strengthens the essential services and institutions that will serve the population over the long term. They also need to seriously consider how the Congolese people who have suffered for long could benefit from income the country’s natural resources generate. Difficult questions need to be asked: Does development assistance at the national level unlock decentralization? Is it designed to complement government investment in basic social services? And most importantly, does it rest on assumptions, or available evidence and clear outcomes, about what actually works?

At the IRC, we have made an explicit commitment to better aid: assistance that is focused around clearly delineated outcomes, with a clear story of how and why we think the intervention will work to achieve these outcomes, based on the best available evidence. We have launched a powerful reference tool to this end called the Outcomes and Evidence Framework, available as an interactive online platform for all aid actors to use. Both donors and agencies need to unite around evidence about what works and conduct more research where there is a lack of evidence, to evaluate rather than replicate past programming and improve current practices.

Third, we must actively engage in the quality assurance that comes with speaking to aid recipients themselves. The same poll by the Congo Research Group found that a third of its respondents thought the DRC would fare better without international NGOs—a figure that should provide us with a sobering pause for thought. These statistics are even higher in the most unstable areas, such as the Kivus. This highlights that the average Congolese citizen has not seen an improvement in their quality of life and are still living continuous cycles of conflict and instability, despite decades of aid. A regular and systematic surveying of one’s customers is second-nature in the business world and should be for the international community in the Congo and elsewhere. Moreover, if the international community is committed to helping foster an accountable and responsive Congolese state, it should also start by modeling this behavior itself.

We at the IRC are committed to doing our part in delivering on these aspirations, but it will take a transformative effort on the part of the wider aid and development community to see this to fruition. We view these efforts as foundational for bringing real and lasting improvements in the lives of the people of the Democratic Republic of the Congo. Now is not the time to step back from the challenge. 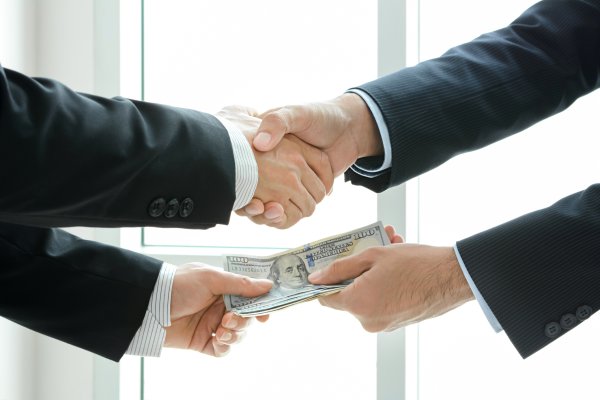 We Learn To Take Bribes At An Early Age
Next Up: Editor's Pick