Russia’s ambassador to Turkey was shot dead in Ankara on Monday by a police officer who shouted, “Don’t forget Aleppo! Don’t forget Syria!” in an attack that will unsettle the sensitive diplomacy around the civil war in neighboring Syria.

The shooting comes at a moment of high stakes negotiations between Turkey and Russia, with implications for the future of the Syrian conflict that has left as many as half a million people dead. Russia condemned the killing as an act of terrorism.

Ambassador Andrei Karlov was shot at an art gallery in the Turkish capital on Monday. In video footage, the ambassador stands at a podium as gunfire rings out. He flinches and then drops to the floor. Standing behind him, a man holding a gun and wearing a dark suit and tie raises one finger skyward and shouts, “Allahu akbar,” Arabic for “God is great.”

The gunman continues in Turkish, “Don’t forget Aleppo! Don’t forget Syria! Step back! Step back! Only death can take me from here.” He adds: “As long as our cities are unsafe, you will not be safe,” and: “Everyone who has a role in this cruelty will pay for it!”

Turkey’s Interior Minister Suleyman Soylu identified the attacker was a 22-year-old police officer named Mevlut Mert Altintas. During the attack, the assailant also recited a slogan in Arabic: “We are those who pledged jihad to Mohamed.”

Russian and Turkish leaders stressed that the assassination would not result in renewed hostility between the two countries. Turkish President Recep Tayyip Erdogan called the killing “an unquestionable provocation to damage Turkish-Russian bilateral relations.” He said that he and Russian President Vladimir Putin “on the same page on this issue. There is no controversy.”

Putin echoed his Turkish counterpart, saying in televised remarks, “This murder is clearly a provocation aimed at undermining the improvement and normalization of Russian-Turkish relations, as well as undermining the peace process in Syria.”

The countries have a long and difficult history, but lately it’s Russia’s support for the regime of Syrian President Bashar Assad that has angered sections of the overwhelmingly Sunni Muslim public in Turkey, where the government supports Syrian rebel groups fighting Assad. Over the past several days, angry demonstrations took place outside Russia’s diplomatic missions in Turkey, denouncing the Russian bombardment of the rebel-held section of the city of Aleppo, with heavy civilian casualties.

Turkey’s government, meanwhile, has directed much of its energy at other players in the Syrian conflict, including Kurdish militants who are arrayed against Assad but who Turkey, with a huge Kurdish minority, views as a threat to its sovereignty. Turkey is also moving against ISIS, which has carried out devastating terror attacks inside the country. At the same time, Ankara remains engaged with Moscow despite its strong alliance with Assad. The governments overcame the rift that followed Turkey’s shooting down a Russian warplane that crossed into its airspace along the Syrian border in November 2015, after which Russia imposed sanctions on Turkey. Putin and Erdogan reached a rapprochement in June and Turkey hosted the Russian leader at an energy summit in Istanbul in September.

The assassination of the Russian ambassador in fact took place on the eve of a diplomatic summit in Moscow including the Foreign Ministers of Russia and Iran, a meeting of key regional powers that back opposing sides in the Syrian war. Russian and Turkish officials confirmed that the meeting would proceed as planned.

Last week, Turkey and Russia negotiated an agreement to evacuate the remaining civilians and rebel fighters from a besieged enclave in the city of Aleppo, marking a victory for the Assad government and a turning point in more than five and a half years of crisis.

Russian Foreign Ministry spokeswoman Maria Zakharova called the assassination a “terrorist attack.” According to Russia’s TASS news agency, she said Russia was in contact with Turkish officials who had had pledged an “all-round” investigation into the shooting. “The attackers will be punished,” she said.

The U.S. also condemned the attack. “This heinous attack on a member of the diplomatic corps is unacceptable, and we stand united with Russia and Turkey in our determination to confront terrorism in all of its forms,” said National Security Council spokesperson Ned Price in a statement.

U.S. President-elect Donald Trump also denounced the killing in a statement, saying, “Today we offer our condolences to the family and loved ones of Russian Ambassador to Turkey Andrei Karlov, who was assassinated by a radical Islamic terrorist. The murder of an ambassador is a violation of all rules of civilized order and must be universally condemned.”

— With reporting by Simon Shuster 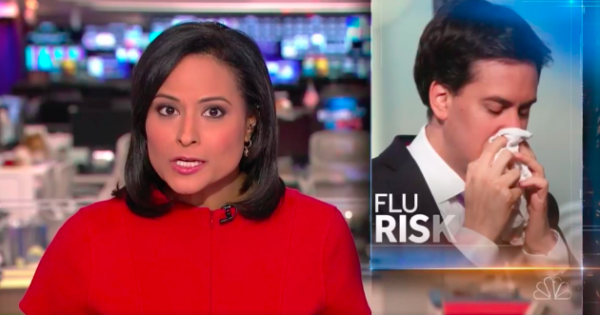 NBC Used a Picture of British Politician Ed Miliband To Illustrate the Flu
Next Up: Editor's Pick